There are main story spoilers for Hollow Knight and Golden Sun: The Lost Age this week, so if you want to totally avoid all potential spoilers so you can play these games yourself in a blind run, you shouldn’t continue reading! Click a title to skip to that section. Games contained within this post:

This week I got the Lemurian Ship, allowing me access to the vast Eastern Sea, which I could explore freely. Honestly, the freedom was a little overwhelming. With the expansive ocean of the world map now traversable, I wasn’t sure where to go first. In fact, this part of the game is non-linear, and there are several dungeons you can explore in any order. I ended up consulting a guide to get my bearings during this part of the game, and to make sure I didn’t miss anything.

I explored several dungeons including Aqua Rock in order to get the pieces of the Trident of Ankohl and reassemble it. With the Trident in hand, I was able to challenge Poseidon at the end of the Sea of Time. After felling the ruler of the sea, the way to Lemuria was open to me, and we at last reached Piers’ legendary homeland.

The visit to Lemuria included an audience with King Hydros, the Lemurian monarch. Kraden revealed to the group that he suspects the world itself is decaying due to Alchemy being sealed away, and King Hydros shares this belief. With that, the King urged to group continue their quest to light the remaining Lighthouses, and gave them the Grindstone to aid their quest, which allows the use of the Grind psynergy and meant we could now reach the Western Sea.

Eventually, our travels in the Western Sea brought us to the Jupiter Lighthouse. Before the Lighthouse could be lit, Isaac’s group finally caught up with us, but they were being pummeled by Karst and Agathio, 2 Mars Adepts from the same village as Saturos and Menardi from the first game. In fact, Karst is Menardi’s sister, and therefore holds a fierce grudge against Isaac. My group stepped in and prevented Karst and Agathio from killing Isaac and his group. A brief battle between us occurred after lighting the Lighthouse, but we had no chance of winning, and it was a scripted battle we were meant to lose. Luckily, the Mars Adepts fled when Isaac’s group came to our aid, having healed themselves from their earlier battle.

Afterward, Isaac’s group and my own reconvened at the nearby town of Contigo. There, Kraden explained why they wanted to see the lighthouses lit, and convinced Isaac’s group to join our own. Now, both parties have joined forces to see the final Lighthouse lit. Our ship has been given wings by the people of Contigo, and can now fly over reefs that previously blocked our path. We’re fully equipped for the last leg of the adventure! I’m hoping to finish the game in the next week, and check the Golden Sun duology off of the backlog!

This is probably the most anime game I’ve ever played. You play as Japanese high school student Itsuki Aoi, and the story largely revolves around Japanese Idols. Itsuki’s friend, Tsubasa Oribe, is obsessed with the idol Kiria, and wants to become an idol herself. Tsubasa’s drive partially comes from her tragic past, in which she was the sole survivor of an incident at a concert 5 years ago where she watched her sister, who is also an idol, vanish while performing onstage, as well as the rest of the audience. Hoping to get closer to the truth of what happened 5 years ago, Tsubasa is determined to enter the idol industry, and attends an idol competition during the game’s prologue.

During the competition, disaster strikes again. People grow tired and begin vanishing as the monsters harvest their “Performa” energy. The MC’s appearance takes a turn for the monstrous as he drags Tsubasa through a portal to a strange parallel world called an Idolasphere. Itsuki watches in horror, but is quick to follow them through the portal to try and save Tsubasa. Here you get your first taste of the dungeon crawling gameplay, as you navigate through a short dungeon to reach Tsubasa.

Once you catch up to them, Itsuki is nearly overwhelmed by the strange monsters of this world. Somehow, he manages to bring the monster back to its senses by shoving a glowing orb of his Performa into it. The monster can them return to its true form: a being called Chrom. Yeah, like the Fire Emblem character. Thinking on his feet, Itsuki does the same to the monster that has Tsubasa in its grip, and it likewise comes to its senses and reveals that its name is Caeda, another character from the Fire Emblem series.

Chrom, Caeda, and the other creatures of the Idolasphere are all called Mirages. Chrom and Caeda both agree to help Itsuki and Tsubasa fight, transforming into weapons for them to wield and putting them both through magical transformations as the two high schoolers assume their Mirage Master forms. Finally equipped with a way to fight back against the Mirages, Itsuki and Tsubasa fight back against them, releasing the MC from earlier from Mirage control, and escaping safely through the portal back to the normal world.

After escaping the portal, the two meet Maiko Shimazaki. She runs a talent agency called Fortuna Entertainment. In secret, her agency is really investigating and combating Mirage-related threats as well, and is in need of more help on this front. For that reason, she extends an invitation to new Mirage Masters Itsuki and Tsubasa. They accept, and their entry into the world of show business and supernatural threats truly begins!

I’m really enjoying this battle system. There are several types of physical attacks, such as sword and lance, and even more types of elemental attacks like fire, wind, and ice. The key to victory is exploiting the enemies’ weaknesses. When you hit an enemy’s weakness, this can trigger a Session where other members of your team perform immediate followup attacks for extra damage. Whether or not they join in the Session depends on their Session Skills.

As you gain mastery with weapons, your characters learn new skills. Some are Passive upgrades, others are new attack commands, and some are Session Skills. Session Skills always trigger based on the affinity of the previous attack. For instance, a skill like Sword-Elec triggers when you exploit an enemy’s sword weakness, and results in an electric followup attack. If another character in battle has a Session Skill like Elec-Lance, then their followup will trigger as well. This kind of chaining is really cool! Of course, your enemies can also perform Session attacks against you, so it’s important to be on your guard and keep your own weaknesses in mind.

Despite the gameplay being completely different from that of the Fire Emblem series, there are a lot of nice nods to Fire Emblem strewn throughout the game. The sound that plays when a character levels up is the same as in Fire Emblem, which I love! And of course there’s the Mirages that fight alongside the Mirage Masters that join your party, like Cain and Tharja. I’m really enjoying the nods to Fire Emblem!

The visual style of the game is executed superbly too. Bright, pastel colored silhouettes make up the crowds in Shibuya, and give the area a lively feel. I also love the way the characters helping you on your journey show up in the menu. It feels so carefree, it’s just so cool!

There’s a ton of stuff to do too. The bulk of the gameplay is exploring dungeons and battling enemies. Enemies drop crafting materials though, feeding into another large gameplay element: crafting. New weapons are obtained through crafting, and new skills can be learned through crafting too. There’s also side quests that further develop the characters in your party, and from what I’ve seen so far these are definitely entertaining enough to warrant completing! 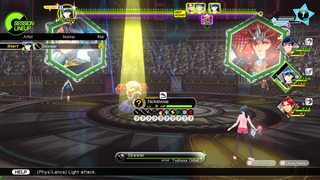 My only real complaint so far is that there aren’t subtitles during battles. There’s no English dub, so I’m reliant on subtitles during cutscenes and the text in dialogue boxes during events, which I have no problem with at all. But when the characters and enemies are speaking Japanese during battles, I have no way of knowing what they’re saying because there’s no battle subtitles and no option (that I’ve found at least) to enable them! Persona Q2 had the same annoying problem. I’m assuming the voice lines aren’t essential, but it would be nice to be able to understand them, especially since the characters’ expressions sometimes turn fearful or surprised at the beginning of battle when they speak.

Other than that, I’m loving Tokyo Mirage Sessions so far. The music is really good, I find myself bopping along to it pretty frequently. Battles are great, and the dungeons have been fun to explore. There have also been 2 full J-Pop songs so far, and there might be more to come given the emphasis on idols and whatnot, which is fine by me! So far I’ve completed the Prologue and Chapter 1, and I believe I’m pretty close to finishing Chapter 2 now.

I began the week by fighting a few bosses. The Dung Defender fell to my blade on my first attempt, but I wasn’t so lucky when I stumbled upon the Flukemarm. The Flukemarm is a completely optional boss, hidden away in an area that might easily be missed. It’s just a big sac hanging from the ceiling of the cavern that spits out Flukefeys. I died attempting to defeat it at least five times. After a few attempts, I adjusted my strategy, changed the Charms I had equipped, and was finally victorious. Defeating the Flukemarm won me a new Charm that I haven’t used yet.

My travels then took me to the Resting Grounds, an old Hallownest cemetery. Here, details of the plot and backstory were made slightly clearer, as was my overall goal. It seems that what the player character has come to do is break some sort of Seals in order to awaken (or possibly destroy) the Vessel. To break the seals, 3 beings known as the Dreamers must be awakened, and I think defeated. A vital part of this will be the Dream Nail, which I acquired in the world of Dreams after being banished there briefly by the Dreamers’ power.

With the Dream Nail in hand, I explored a bit more. I managed to collect a few more Mask and Soul Vessel pieces, completing a whole of each. These collectibles are very much like the Heart Pieces of The Legend of Zelda series, and collecting them is just as fun and rewarding in Hollow Knight. I also found some Pale Ore and was able to upgrade my weapon again, the small boost in attack power is definitely welcome as I can defeat more enemies in just 1 or 2 hits.

I ended the week in Crystal Peak. There are interesting laser enemies and bugs with pickaxes here, mining crystals for some sort of industrial operation. Right at the end of the week I found the Crystal Heart. It’s an awesome super dash ability! I’m looking forward to seeing which paths are now open to me!