We’ve reached the final What I’m Playing post of 2019. Whether you’re here for the first time, or you’ve been reading since post number 1, thanks for visiting!

My Luigi’s Mansion section is spoiler-free, though there’s not really much to spoil in that game. For Breath of the Wild, I’ve spoiled the general premise and backstory of the plot. If you want to go in without knowing that, then skip that section this week! 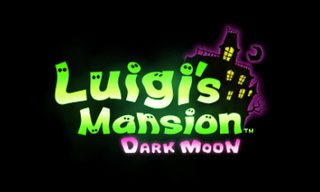 I played through Luigi’s Mansion Dark Moon this week! For some reason, it’s only in North America that it was given this name. The rest of the world knows it as Luigi’s Mansion 2, which I think makes far more sense. Maybe Nintendo of America was afraid of branding it as a full sequel since it does deviate from the original in a number of ways? Whatever the case, it was a fun experience, and a solid follow-up to the original!

In the beginning, Professor E. Gadd is researching and living with peaceful ghosts in the Evershade Valley. The ghosts there are peaceful due to the effects of the mysterious Dark Moon that hangs in the sky. However, when a mysterious silhouette shatters the Dark Moon, the ghosts become mischievous and violent.

In response to this, E. Gadd flees to his underground bunker, and summons up his go-to ghost-hunting lackey, Luigi against his will. He asks Luigi to seek out the pieces of the Dark Moon so it can be made whole again. E. Gadd again brings his inventions and knowledge of ghosts to the table to help Luigi, but the rest is up to the lovable and fearful green Mario brother.

There are a number of changes to the formula compared to the original Luigi’s Mansion, but the core of the experience is the same. You’ll guide Luigi to explore rooms, find keys, solve puzzles, and suck up ghosts with your trusty Poltergust vacuum. The mechanics of the ghost-catching are slightly tweaked, in that you now need to press a button to shoot a stronger flashlight pulse at ghosts to stun them, instead of just hitting them with the normal light from your flashlight. 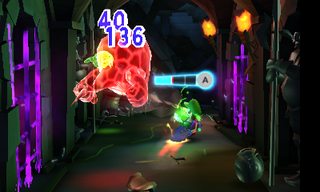 You also charge up a meter while pulling against them as Luigi vacuums them up, and when the meter is charged pressing A nets you bonus damage and keeps them from escaping the Poltergust’s pull for a while longer. These tweaks to the ghost-catching mechanics worked pretty well, although having to “shoot” the flashlight at ghosts to stun them is a little weird in premise, but it works well as a gameplay element.

Additionally, there’s a new exploration mechanic introduced early in the game. Certain objects are invisible due to the presence of Spirit Balls. Shining your Dark-Light Device will reveal these objects temporarily, and flush out the Spirit Balls that are concealing it. Vacuuming up the Spirit Balls will dispel the illusion, making the object permanently visible and allowing you to interact with it normally. This is used in many puzzles throughout the game, and there are also a bunch of doors hidden this way. It was a pretty fun mechanic, and apparently it returns in Luigi’s Mansion 3 as well!

One of the biggest changes to the gameplay structure compared to the first game is that Dark Moon is mission based. The first game was sort of structured the same way behind the scenes, with Luigi returning to E. Gadd after collecting certain portrait ghosts, Dark Moon takes this much further and has actual missions/levels. I haven’t played it in a long time, but I think I prefer the structure of the original game. That said, the design of Luigi’s Mansion Dark Moon is still fun. The missions are bite-sized, likely to adapt the formula to shorter handheld gaming sessions, and a single mission took me, on average, about 15 minutes, with the longest ones taking around 30 minutes if I got stuck on a puzzle for a while.

Another big change is that rather than taking place in a single mansion like the first game, Luigi’s Mansion Dark Moon has you visit 5 different mansions over the course of the game. Each mansion was fun to explore, but I did find myself thinking back longingly to the single, large mansion of the first game from time to time.

Lastly, there are no portrait ghosts in this game. Portrait ghosts were the bosses and mini-bosses of the first game, but here they’re mostly replaced by more generic ghosts. The bosses in this game are mostly “possessor” ghosts, who all look pretty much the same, and fight you by possessing something and attacking you. The boss battles themselves were okay, but I feel like they’re not as good as the portrait ghost boss battles of the first game. That could just be nostalgia talking though.

I could ramble on more about the differences between the first 2 Luigi’s Mansion games, but I’ll leave it there for now. There are aspects of each game I prefer. Both have a lot of charm though, and are fun games that give Luigi a moment in the spotlight!

I played a little more Odyssey this week, and collected a few more Power Moons by just wandering around or doing some shepherding. You know, the usual!

My Power Moon total is up to 520 now, but I feel like there’s still so many left to collect! Running and jumping around to find them still hasn’t gotten old though, it’s just so much fun!

The Legend of Zelda: Breath of the Wild (Switch)

I finally started Breath of the Wild this week!

I’ll briefly summarize the premise as revealed in the Great Plateau during the beginning of the game. 100 years ago, Link was gravely injured fighting against Ganon with Princess Zelda. Link awakens, healed, in the Shrine of Resurrection after sleeping for 100 years. He picks up the Sheikah Slate, an advanced little tablet that can activate Sheikah relics, which causes towers and shrines across Hyrule to re-activate. He gains several Rune powers from shrines around the Great Plateau. Then, the spirit of the King of Hyrule explains how Ganon took control of the Guardians and Divine Beasts, ancient weapons the Hylians intended to use to seal Ganon away, and with them laid waste to Hyrule. The King lost his life to the Guardians, but his daughter Zelda survived. Even now, Zelda remains at Hyrule Castle, keeping Ganon contained there. But her power is waning. It’s up to Link to help her defeat Calamity Ganon, and end the threat to the kingdom!

With that, you are given the Paraglider, and finally have a means to safely leave the Great Plateau. From there, you’re free to explore Hyrule. You could guide Link directly to Hyrule Castle. However, the King advises that this would be foolish, and instead advises you to seek out Impa at Kakariko Village. So, that’s exactly what I set out to do!

Of course, given the open world nature of the game, I got distracted along the way. I stumbled upon a Korok, collecting a seed from it, got the Spirit Orb from a Shrine along the way. After discovering my first stable, I found and tamed my first horse, who I named Scrub. It’s named after a Deku Scrub. I forgot how fun riding a horse around Hyrule in a Zelda game is. Especially in Breath of the Wild with its expansive world! Plus, you can attack from on horseback, similar to how you were able to in Twilight Princess but this feels more polished.

Riding my trusty horse Scrub, I went exploring and found Hateno Village. I found the Dye Shop here, where you can pay to dye your current set of armor, choosing from a wide selection of colors. I went with light blue. It doesn’t have any effect on the stats of your equipment at all from what I can tell, but I’d still consider it money well spent. With the armor and bandana died light blue, Link looks like he’s ready to join Team Aqua from Pokémon Ruby/Sapphire. 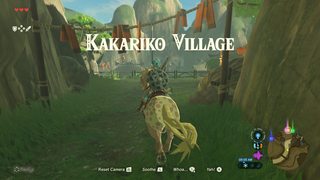 After that, I got back on track pursuing my main quest to find Impa, and finally made it to Kakariko Village. The Sheikah have always been like Hyrule’s version of ninja’s, but the Japanese-sounding music and architecture of Kakariko Village in Breath of the Wild really solidify this idea.

Anyway, I spoke with Impa and she had another quest for me, directing me to find a Sheikah researcher at the lab near Hateno Village. Luckily since my detour took me to the Shrine near there earlier, I could fast travel back! I quickly found the researcher, Purah. With her help, the final rune of the Sheikah Slate was unlocked: the Camera.

With the Camera, Link basically has a smartphone. The applications for the Camera in-game seem really cool though. By taking pictures of objects, they’ll be added to the Hyrule Compendium. The Compendium is massive, and has pages of animals, monsters, and all sorts of things to take pictures of and fill the Compendium. For some reason, that alone seems like a fun completion task to me, maybe because it reminds me of the Pictograph and Figurine mechanics from Wind Waker. But adding an item to the Compendium has a practical use as well. You can set your Sheikah Sensor to track any object you’ve added to your Compendium, and it will let you know when that item is nearby. I haven’t tried this yet, but it sounds pretty useful!

After getting the Camera, I followed an old man in Kakariko and he pointed me to the direction of the nearby Great Fairy Fountain, where I revived a Great Fairy by giving her 100 rupees. They went with slightly different design for the Great Fairies in Breath of the Wild from what I’ve seen in the series before. The Great Fairy I found can enhance your equipment if you give her a few raw materials, increasing its armor value. It was definitely worth seeking her out!

That about sums about my adventure in Hyrule so far, but there are a few final random notes I want to share. I love that Beedle is in this game, seeing him again is really making me feel nostalgia for The Wind Waker! With the open world, you can really get into situations that you are vastly under prepared for, leading to death as you get trampled by a Bokoblin on horseback. I love it! Lastly, Blood Moons are super metal. I only saw one this week, but as it began, the light began to turn red, and ember-like particles filled the air. At the time, I had just started some grass on fire in Hateno Village, and I was worried that the changes were due to it spreading into a wildfire or something. But nope, just a Blood Moon!

That’s all I have to say about Breath of the Wild for now. There’s so many things to do in this version of Hyrule, and so many possibilities within the gameplay and combat, it’s just amazing. I’m really looking forward to playing more!