There are final boss spoilers for Castlevania: Aria of Sorrow in this week’s post. My Bayonetta write-up is spoiler-free though! Click a title to skip to that section. Games contained within this post:

I finished Aria of Sorrow this week. It was a smooth road to end, and I really enjoyed it! 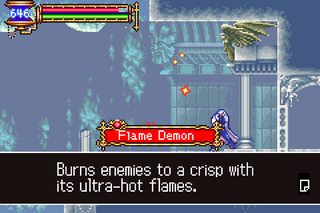 The final boss was the last thing standing in my path…or was it? From reading a guide, and to a lesser extent finding the in-game Ancient Book items that offer cryptic hints, I knew that just defeating this boss would end the game, but it wouldn’t be the best ending. Wanting to get the good/true ending, I went hunting for specific enemy souls. Because in order to get the true ending, you need to have 3 specific souls equipped when you fight this boss: the Flame Demon, Giant Bat, and Succubus souls. I mentioned the Giant Bat soul last week. It allows you to turn into a bat, and is required to reach some areas. The other two souls are drops from the corresponding enemies, and I was a bit skeptical that getting these would be fun. But to my surprise, once I found the enemy spawns, I probably only had to defeat about 10 Flame Demons and maybe 20 Succubi. It was actually pretty fun getting them, as I explored more of the castle and picked up more optional treasures on the way!

With those souls in my possession, I returned to fight the final boss: Graham, who has been absorbing power from Dracula’s castle. He was a pretty easy boss once I learned his patterns. Since I had the specific souls equipped though, he wasn’t really the final boss! After defeating him, there was a short cutscene where Soma learned what he must do next, and I was able to keep exploring. There was also a new soul to pick up in the room adjacent to the room you fight Graham, the Black Panther, which lets you do this awesome dash attack. You dash pretty quickly to the side, can use it in mid-air, and it even damages enemies a little when you run into them!

Soma then delves into the Chaotic Realm, an area that consists of distorted versions of castle areas, and some crumbling rooms reveal glimpses of space outside. At the end, you find the real final boss: Chaos. During its first phase, your soul abilities are sealed away. It really became apparent how useful those are when I was unable to use them for the first part of this battle. After that form is defeated, the second and final form is revealed. Both weren’t too difficult, but I did go in fully prepared with plenty of potions, and I did have to use a number of them!

With Chaos defeated, Dracula’s Castle vanishes once more. Soma and Mina have finally found their way out, and return safely home.

This was a really fun game overall! My only complaint remains the Death fight…that fight is still ridiculous! But the rest was all fair, offering a nice challenge. After beating the game, you can even play through it as a Belmont, similar to the Richter mode in Symphony of the Night. There’s also a Boss Rush you unlock, as well as the option to start a game on hard difficulty, and a New Game+ option where you carry over your weapons, armor, and souls (minus the traversal ones like Double Jump). There’s lots of reasons to replay the game, and they’re tempting enough that I might revisit it someday!

I played through Bayonetta this week, and it was quite an experience!

Getting into it, I really had no idea what was going on. You see some weird bits of flashbacks before the main menu shows up, and then some more cryptic exposition before the prologue. The beginning of the prologue has you control Bayonetta fighting off some angelic creatures while hurtling around on bits of rubble. It was pretty impressive, and set the tone for what was to follow!

The next thing you know, it jumps ahead to present day, adapting a film style that returns in some later cutscenes as well. There were was even an opening credits scene highlighting some key figures of the development team. The cutscenes have a really cinematic feel, often presented as cells of a film strip with dialogue overlaying. The setting is pretty intriguing, basically there are several worlds: Paradiso, home of the angels, Inferno, home of the demons, and the Human World, which is the world we all know. There’s also Purgatorio, a realm parallel to the Human World. Humans are unaware of Purgatorio and cannot see those within it, but those in Purgatorio can see and interact with things in the Human World.

Purgatorio is where much of the game takes place. Bayonetta is an Umbra Witch, a practitioner of dark magic who has made pacts with demons from Inferno. After waking up in a casket at the bottom of a lake 20 years ago, she knows nothing of her past, except that she is a witch, and she definitely remembers how to fight. The plot follows her as she fights against the residents of Paradiso, the Laguna, making them food for her demonic friends, and tries to learn about her past.

This is the first PlatinumGames-developed game I’ve played, but they’re known for very deep action battle systems with high skill ceilings. Bayonetta’s combat definitely fits that description. You have two types of attacks, punches and kicks, which can be strung into a long list of different combos depending on the order and number of times you push each button. You can also dodge enemy attacks, and doing so at the last possible moment will cause you to enter Witch Time, where time slows down and you can attack the enemies with vicious combos while they’re wide open.

The depth of this comes from a few things I’m not the best at: extending your combos with gunfire, and dodge offsets. The gunfire mechanics is simple, after pressing an attack button, even in the middle of a combo, if you hold it Bayonetta will fire one of her guns at the enemy and stand in place. You can then release it and launch more attacks to continue your combo. Dodge offset is similar. After pressing and holding an attack button, you press the dodge button, and Bayonetta will dodge, continue holding the button until the dodge is over and then continue pressing buttons for your combo. This allows you to dodge an enemy attack while maintaining your combo. It’s tough to use effectively since you have to time it with enemy attacks, but I’ve been trying to get the hang of it!

I started the game playing on Normal, which is the hardest difficulty available before beating the game. I switched to Easy starting from Chapter 6, because battles were really challenging! On Normal, I got several Game Overs even in the first few missions. You do have unlimited continues, but it tracks how many continues each chapter takes you. Using a continue really hurts your score at the end of the chapter, and with the way I was barely scraping by on Normal, I was getting the worst possible rating on several chapters in a row! Easy was hugely easier, and even allows you to just mash a single attack button and it will basically auto-battle for you, dodging and extending combos automatically. I tried not to do this, since I do want to learn and get better at the finer points of combat and combos! Both difficulty levels are really fun though. Getting a combo going against an enemy and dodging attacks is an awesome adrenaline rush.

Bayonetta is an action-packed, ridiculous experience, and I really enjoyed it! There’s definitely a learning curve, but the combat is so action-packed and over-the-top that it’s definitely worth it. Beating the game unlocks an extensive concept art gallery, which is pretty cool. I’m definitely keeping this one installed for now. Now that I have more upgrades and techniques purchased, and I’m a little better at combat, I’ve been able to beat some of the levels on Normal that were impossible for me earlier, and I’m looking forward to beating the rest of them on Normal as well!