There are some Fourside event spoilers for Earthbound in this one. Nothing really major though. I mean, I don’t even know if Earthbound has major spoilers. If you want to totally avoid all potential spoilers so you can play Earthbound yourself in a blind run, you shouldn’t continue reading! The only game contained within this post:

Ness and his companions’ zany adventures continue this week! 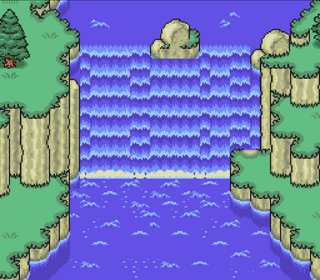 On the way to Master Belch’s lair, Earthbound employed some pretty strange game design. First of all, after learning the password to enter the lair, you have to go to the hidden entrance behind a waterfall. This isn’t out of the ordinary for a video game, but the weird part is how you enter. You have to stand still and not press any buttons for 3 whole minutes. I’d heard about this part before, so I wasn’t surprised to play it. Still though, those 3 minutes felt like forever just standing there!

Then, shortly after defeating Master Belch, you can stop to have a cup of coffee from a Mr. Saturn. This part almost feels like the game designers actually want you, the player, to get up and grab a coffee or other drink. The screen changes to some trippy visuals and text slowly scrolls upward. It was actually a nice little break reflecting on the journey I’d guided Ness on so far.

Anyway, with the zombies and ghosts of Threed cleared up, the group boards a bus bound for the big city: Fourside. The bus ride is cut short by a traffic jam in the middle of the desert, and you have to continue on foot. This desert area seems big, and I’m guessing it’s holding some secrets. I pretty much just walked through the minimum amount of it to get around the traffic jam and reach Fourside. I expect I’ll have to return to it at some point for something.

Fourside is a very striking location. All the buildings are at a different perspective than the buildings in other cities have been. It’s hard for me to explain, but looking at screenshots it should be pretty obvious what I mean. Everything looks much more “isometric” in Fourside, I guess?

Fourside’s visual perspective was just the beginning of the oddities in store for me there. The city is ruled by the corrupt Mr. Monotoli. While investigating him, Ness and company stumble into Moonside, a neon-filled, distorted version of Fourside. In Moonside, Yes means No and No means Yes, and this applies to all dialogue with NPCs in Moonside. So, if you want to stay a “sleep cycle” at the hotel in Moonside, you have to answer “No” when prompted if you want to stay. It’s weird, but pretty cool! Eventually, I found my way to an evil statue in front of Moonside’s version of Mr. Monotoli’s building. After destroying it in battle by having Jeff launch two Super Bottle Rockets at it (those things are seriously powerful!), we learn that Moonside was an illusion caused by the statue’s power. Ness and company were just stumbling blankly around a small warehouse the entire time believed they were in Moonside.

Another weird series of events followed in which I guided Ness through an underground cave filled with friendly monkeys with strange food cravings in order to retrieve a Yogurt Dispensing machine. Ness was also taught PSI Teleport by a monkey from that cave, so now we can Teleport whenever we’re outside to any city previously visited. Ness is shown using this ability in the Super Smash Bros. Melee opening, where he teleports to Onett I think and comes barreling out of a psychic portal leaving a fiery trail in his wake. It’s a pretty sweet scene, and I’ve thought of that every time I’ve used it so far, even though PSI Teleport doesn’t look nearly as cool in Earthbound.

Anyway, after traveling there in a UFO, we’re now in the overpriced resort town, Summers. I admit, I paid the Hint man here his asking price of $150 just to get an idea of where to look to progress in this new city. When I played part of Earthbound a long time ago, I remember making it to at least Threed. But Summers and much (or all?) of Fourside has been brand new to me, and it’s all been a video game experience unlike any other.