Although, it’s sort of like The Legend of Zelda in that the character is named by the player. Ness is the default name, but I could have named him whatever 6 character name I wanted. In fact, you name all three of your other future party members, as well as your dog, your favorite homemade meal, and your favorite thing. Lots of things to name when you start a new game! I went with the defaults for all of them, I guess because I’m looking for a “canon” Earthbound experience.

Like all great JRPG heroes, Ness begins the game sound asleep. A loud noise outside wakes him, and he decides to go investigate. Turns out it was a meteor crashing down. A talking insect named Buzz Buzz appears near the crash site, telling them he is from 10 years in the future when everything is in ruin due to the evil Giygas’ influence. Buzz Buzz tells Ness that he believes Ness is one of 4 heroes of legend who is destined to stop the evil Giygas from creating the apocalyptic future that Buzz Buzz came from. Despite being an insect, Buzz Buzz is quite powerful in battle. Unfortunately, he’s smashed by the Ness’s neighbor. With his dying breath, he tells Ness to seek out 8 places of power, and this will allow him to defeat Giygas.

Buzz Buzz’s death plays out pretty humorously, as does much of Earthbound’s dialogue. He keeps going on and on about how he’s near death, but asks if you want him to repeat his long dying tale. Much of Earthbound makes it abundantly clear that it’s a video game. You can talk to animals (maybe psychically, it’s not really explained), and there are moles who give you gameplay tips. There’s also a dog who mentions being possessed by the spirit of the Game Designer and proceeds to explain how the game indicates whether equipment a shop is selling is better than what your characters have equipped.

One of the things I like about it is that it doesn’t have random encounters. Enemies appear on the overworld, and combat only initiates if they touch you. They do move pretty quickly, so running past all battles would be pretty tough if not impossible. Still, it’s nicer than random battles popping up every few steps. Combat is a classic turn-based system wherein you fight some pretty bizarre enemies, like New Age Retro Hippies, Cultists, and walking plants. After you defeat them, they either return to normal if they’re a human-like enemy, or become tame if they’re an animal. Giygas’ evil influence is the reason they have become hostile in the first place, and I guess combat frees them from that. 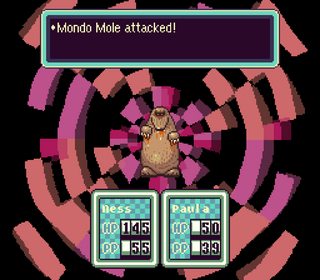 Sometimes combat can be challenging. I died to a giant mole boss several times before I looked online to see if I was missing an obvious strategy. Sure enough, I was! Ness’s PSI Paralysis works wonders on this boss, since if you paralyze him he can’t use any of his attack moves since they’re all physical.

Luckily, the consequence of dying in battle is pretty lenient. Rather than sending you back to your last save, you’re sent back to the last location you saved, and you lose half the money in your wallet, but the rest of the game state stays the same. Any experience or levels you gained stay with you, and items you used are still gone from your inventory. The annoying part about this is that only Ness is returned to consciousness after a Game Over. You have to go to a hospital and pay a medical fee to revive your fallen party members. It works pretty well overall though, and I think I prefer it to being forced to load my last save. 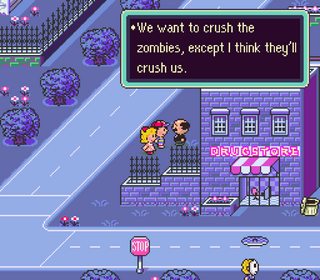 There have been a few rough spots for me, mostly due to it being an older game. Earthbound doesn’t hold your hand, sometimes you need to figure things out for yourself…or use a guide. I had to look up how to get past one small dungeon, because I just couldn’t figure out how to move forward on my own. Turns out I had to use a “Pak of Gum” from my inventory to give my monkey companion a piece of gum so he could blow a bubble, and use that to float up and throw down a rope so I could climb up a cliff and continue on. You know, just the usual. And when you’re wandering around trying to figure out what you’re supposed to do next, enemies will continue to pursue you. Having to battle enemies while trying to figure out what you’re supposed to do next feels pretty grindy. Despite these annoyances, I really am enjoying it so far! 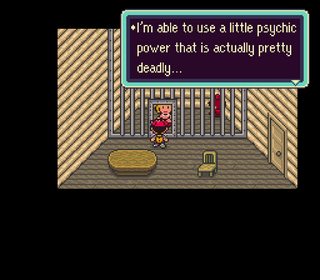 Something I think is pretty interesting is that, at least so far, Ness has basically none of the abilities he has in Super Smash Bros.. Paula is the one who knows PSI Fire, PSI Freeze, and PSI Thunder. Whereas the only offensive PSI Ness knows is PSI “favorite thing”, which is PSI Rockin in my game since I picked the “Don’t Care” option when naming his favorite thing. Other than that, he just knows healing and support PSI. I think he might learn PSI Magnet at some point, and then he’d have one ability from his Smash Bros. moveset!

The Last of Us Remastered (PS4)

After seeing the new trailer for The Last of Us Part II, I got the urge to play the first game again. I’m picking up in the middle of a playthrough I actually started on the side a few weeks ago, but I’m still very early on. 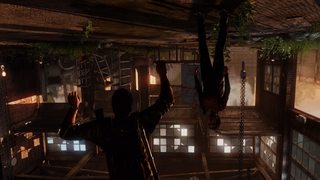 One cool part segment from my playtime this week is when player-controlled character Joel steps onto a trap during a scripted event, and ends up hanging upside down. He can still reach his pistol holster, but he obviously can’t move around at all. A refridgerator is the counterweight suspending Joel in the air, and the noise of it falling when the trap sprung attracts the attention of a large number of infected Runners and Clickers, some of the main enemies. You have to shoot at them while Ellie, your companion, works on freeing you from the trap. It’s a cool sequence, and I don’t think the “hanging upside down” mechanic is used anywhere else in the game. It’s always pretty cool to see unique elements like that in a game.