The World Ends With You (DS)

I started playing this original DS game this week, having recently bought a copy of it on eBay. My decision to start this is largely due to keeping the priorities I set in my Top 10 DS Games I Want to Play post. Let’s just say I enjoyed it enough that I played through the entire main story this week! 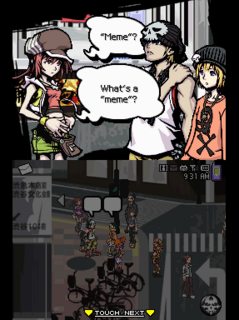 One quick note, capturing screenshots for this was quite the exercise. It doesn’t emulate that well on my phone. Even if it did, the heavy use of touch controls would smudge up my phone screen super quickly. So my process was playing it on my 3DS, frequently backing up my save file, then transferring my saves to PC and emulating it there in order to take screenshots. Like I said, it’s a process!

To give a brief summary of the beginning of the story, the main character, Neku, wakes up in Shibuya with no memory. No one else can see or hear him. He receives a text telling him to head to 104 within 60 minutes or he’ll be “erased.” Before he has a chance to figure out what this means, he is attacked by monsters that materialize out of nowhere. After running from strange monsters, he meets a girl named Shiki, who demands he form a pact with her. He agrees, and a strange light flashes. She hands him a pin, telling him it will help him fight the monsters, which are called Noise. While wearing the pin, he’s able to summon flames with his mind. With their combined strength, the two defeat the Noise, but their struggle isn’t over yet - they still have to reach 104 before time runs out, otherwise they’ll be erased - killed - by the Reapers! Time to book it!

That’s the setup of the story. Neku and the the player are slowly fed more details about what’s going on, and the pacing of this is absolutely wonderful.

Visually and aurally, The World Ends With You is incredible. The graphics hold up extremely well, and the only time it shows its age is with a few awkward looking 3D effects in a few areas. Design-wise it has a ton of style.

I actually find that the DS sound quality adds to the charm. There are a lot of songs with lyrics, which I think was pretty uncommon for the DS, and they get a certain lo-fi crackle (I guess I would call it?) that makes me love them even more. Here’s an example of one song from the OST (probably my personal favorite), “Déjà Vu”.

The battle system makes interesting use of the dual screens and touch screen of the DS. You control Neku, the main character, on the bottom screen exclusively with touch controls, which works out pretty well most of the time. On the top screen, you control Neku’s partner, and control them using either the D-Pad or the 4 ABXY buttons, depending on if you’re holding the stylus with your left or right hand. Since I’m left-handed, I’ve been using the ABXY buttons. 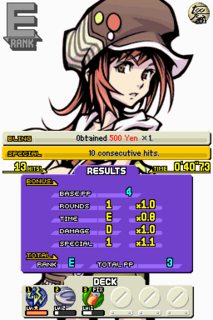 Neku and his partner fight the same set of enemies and share the same pool of HP. You have to keep an eye on both screens at once, which I’ve found to be really difficult! Luckily there’s a mode where you can have the top screen be auto-controlled, allowing you to focus on the bottom screen. However I don’t think this auto-controlled option ever has your partner block incoming attacks. Over the course of the game I got a little better at managing both screens at once, but I still usually let the AI to take over controlling the top screen in most cases, except when I occasionally tried to have them block attacks.

I got a number of Game Overs, generally to bosses or mini-bosses but occasionally just to regular enemies. Some of these were before I unlocked the “Retry after Game Over” feature, and I had to continue from my last save…those times were kind of a pain since I had to go through some dialogue multiple times. At least the Retry features lets you retry on Easy mode if you want. I’ve used the Retry on Easy mode basically every time I’ve lost to a boss. I have no regrets! I enjoyed the unique combat, but it was frustrating at times because it is very difficult to master (at least for me).

A big part of combat for Neku is equipping Pins to enable a wide variety of attacks. Each Pin has a specific gesture to activate in battle. Some have you slashing at enemies with the stylus, while others have you tapping the screen to shoot energy bullets in that direction. Most Pins can level up a few times to grow more powerful. You level them up with PP, which you gain through battle. Interestingly though, you also gain PP when loading up your save file based on how much real world time has passed since you last played. I was really surprised by this feature, but it’s pretty neat to get a little extra experience for your equipped Pins when you boot the game each day.

Anyway, I really enjoyed The World Ends with You. The music, combat, and story are fantastic. I love the contemporary setting. There’s quite a few gameplay systems outside of combat. A lot are common RPG elements, like equipment, but with an interesting spin on top. Some are more unique, like trends and influencing these trends to work in your favor. I might cover some of these features when I write my review of the game. For now, I don’t want this post to get too long!

I was really surprised that DLC fighter Banjo & Kazooie released this week! Previous announcements had said they would be coming in Fall, and it’s not Fall yet! Nintendo pulled a fast one on us again, but in the best possible way.

As a low-skill Smash player at the best of times, my initial play of Banjo against a CPU fighter was unfruitful. Gradually, I got more used to their moveset, and had some very limited success playing as them.

Banjo & Kazooie is a pretty fun addition to the roster. Their side special is a charge attack to the side that’s pretty useful for recovery and dealing damage, and more importantly they’re invulnerable while charging. This is balanced by only allowing them to use it 5 times per stock, but it’s still a powerful ability. I’m still getting the hang of how to play them, but I’ve had a lot of fun so far!

As with previous DLC fighters, Banjo & Kazooie’s release coincides with a new patch. This one is the version 5.0.0 patch for Ultimate. Notably, it adds Home Run Contest mode. The rules are the same as in previous Smash games, but the setup is slightly difference from what I remember in Melee. The Home Run Bat doesn’t spawn immediately, it spawns closer to when the time limit is up. You also don’t need to worry about accidentally knocking Sandbag off the platform, as a forcefield prevents it from getting knocked off (until you hit it with the Home Run Bat that is). Apparently there’s a co-op mode for this now too. I’m not sure if that was present in Home Run Contest in any prior games, but it could be kind of fun.