I wasn’t able to watch it live, but after catching up on the Nintendo Direct presentation streamed on September 4th, 2019, I thought it was a solid presentation! There were a some exciting new announcements, a few of which I’d dreamed in the past and was delighted to hear they would soon be a reality!

Here’s a link to the full Nintendo Direct video, but I’ll also link to specific video segments below for each announcement I found interesting. I’m not covering every game shown. For instance, I’m not an Overwatch player, but I’m glad Switch owners who are will be able to play it on their Switch.

Another note I want to get out of the way, I haven’t written any about the Animal Crossing: New Horizons footage they showed, because I don’t think anything new was announced…? It all looked adorable and amazing, but I think it was all features previously covered between the last Direct and the Nintendo Treehouse presentation. So that’s that: I’m super excited for the new Animal Crossing, but nothing particularly notable was shown here.

Okay, with all that out of the way, here were the announcements that I had a reaction to, or had some specific thought about, in order of appearance during the Direct!

Luigi’s Mansion 3 is looking good! The new environments have a lot of charm, I’m interesting to see what the disco one is like in-game!

The ScreamPark multiplayer they revealed didn’t do much for me. The 8-player local multiplayer mode sounds great in theory, but I don’t see myself getting 7 other people together to play it ever. 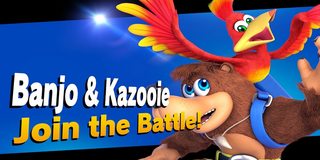 Nintendo’s YouTube channel doesn’t have a video for just this clip, but Banjo & Kazooie launched immediately after the Direct! Nintendo loves dropping immediate surprise releases like this during a Direct. I wasn’t expecting this one at all because they’d announced earlier that Banjo would be releasing in Fall, and it’s still technically Spring! I’m not complaining though, the Smash Ultimate roster just keeps getting more and more impressive.

Nintendo wasn’t done with Smash announcements there though. They revealed that Terry Bogard, from developer SNK’s Fatal Fury series, would be joining the ranks as the 4th Fighter’s Pass DLC fighter.

The way they handled this reveal was so clever. Like past reveals, there was a bit of trolling, beginning with the Nintendo console timeline sliding all the way back to NES/Game & Watch. Then it bounced up to SNES, before finally shifting sideways to the Neo Geo! Then when the Smash Ultimate invite narrowly escapes the clutches of several SNK characters, whoever directed this reveal trailer was just in full-on Troll Mode.

I don’t believe I’ve ever played a game from SNK. I know I haven’t played Fatal Fury, but I’ll gladly welcome new franchises to Smash Bros.! The broader the rosters’ representation of game franchises the better, in my opinion.

To pile on even more Smash Ultimate news, they announced that other new fighters are already in development, beyond the initial 5 promised for the Fighter’s Pass! Basically, there’s going to be another “season” of DLC, and although a 2nd Fighter’s Pass hasn’t been announced, I’m assuming there will be one. The roster is going to be absolutely massive when all is said and done, and I love it!

This was the first new announcement I got actively excited for! The original Tokyo Mirage Sessions ♯FE was exclusive to Wii U, so I never got a chance to play it. It’s a “Shin Megami Tensei x Fire Emblem” game that leans more toward the Shin Megami Tensei side, though it’s closer to a Persona game thematically. Until this Direct announcement, it sort of seemed like Tokyo Mirage Sessions would exclusive to Wii U for all eternity. But with the reveal of the “Encore” port to Switch, we know that won’t be the case!

The timing of this seems highly deliberate. The way they introduce it with “looking for more Fire Emblem goodness?” is obviously building on the popularity of Fire Emblem: Three Houses. But I think the games don’t have a ton in common, and the Fire Emblem elements here are pretty minimal, and are just represented as some sort of summonable entities in battle. Doesn’t matter to me though, I’m looking forward to playing this Persona-esque game with Fire Emblem Personas on my Switch when it comes out in early 2020.

The ability to further customize the hairstyle of the player character is a welcome expansion. This time around there seem to be a lot more hairstyles to choose from compared to previous games, for both male and female characters.

Honestly, I’m surprised at how much I like one of the newly announced Pokémon, Polteageist. I remain disappointed that not all Pokémon will be programmed into the game, but I’m still looking forward to the new Pokémon and region. I’m sure there are some very passionate people working at Game Freak that poured their heart and soul into these games, and they probably did the best they could with the resources they had.

Just like with the NES titles available for Nintendo Switch Online subscribers, Nintendo is now launching a SNES lineup of games for Online subscribers. It’s a very solid lineup of first party titles for the launch: The Legend of Zelda: A Link to the Past, Super Metroid, both Super Mario World games, Star Fox, F-Zero, and a slew of 3rd party games.

But it’s just a drop in the ocean compared to the potential of the SNES library. Games like Final Fantasy III, Chrono Trigger, and the Donkey Kong Country series aren’t available, and I’d love to see Super Mario RPG in the linup as well. These may be added as time goes on, but that’s definitely not guaranteed.

For me personally, I don’t see myself playing this initial SNES lineup that much. The only game available at launch that’s currently in my backlog is Breath of Fire, and it’ll probably be a while before I get around to playing it. I’ve played all the first party gems here already, and I’m not feeling the urge to replay them at the moment.

I’d heard rumors on Twitter that Monolith Soft would be presenting something during the Direct. That “something” turned out to be a remake of Xenoblade Chronicles! It seems to be a remake/remaster of the original game in the Xenoblade Chronicles 2 engine. The difference in graphical quality from the original Wii version to what they showed off during the Direct is incredible. Nintendo consoles have come a long way since the Wii! I’ve never played the original, so this should be an excellent way to experience it! It has a vague release date of simply 2020 at the moment.

Hearing that piano theme during the trailer gave me chills, and seeing the iconic image of the Monado stuck in the ground, with the title above it, just wow! What a great way to end this Nintendo Direct!