I finished my Golden Deer New Game+ playthrough this week!

My units reached Master tier classes, which is always cool because there are some awesome classes at this level. Namely, Lorenz became a Dark Knight, the first I’ve had in Three Houses. Lysithea became a Gremory, just as she did in my prior playthrough. It seems like the best class for her given her high magic stat. Leonie is now a Falcon Knight, which is what I’d planned for her since very early in the game. With her high dexterity and speed, she got frequent critical hits, and dodged most enemy attacks quite well. Marianne became a Holy Knight, basically a mounted unit specializing in white magic. In Marianne’s case, she primarily became a mounted healer, although she did have the pretty powerful Aura spell too. 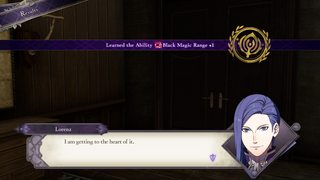 In addition to becoming a sweet Dark Knight, Lorenz also got his Reason skill to A+ or S which caused him to learn the Black Magic Range +1 skill which does what it sounds like. This was really cool actually, since he could reach units a little further away. At least, I was impressed by it.

I want to take a moment here to give an update on a criticism I left on last week’s post about how the last route I played and the Golden Deer route were basically identical after the time skip. Well, that held true for most of the rest of the game. With the exception of 2 missions, I think the maps and objectives were identical between those two routes, with the differences being in the dialogue and events happening between chapters. This was a little disappointing, because while I expect a little map re-use between routes to save on resources, these two routes are virtually identical! Maybe I just got unlucky and it’s only Golden Deer and my last route that are the same like that, but I can’t help but worry that Blue Lions will be the same way. Anyway, here’s a few spoiler-free, no context screenshots from cutscenes. Enjoy!

Beyond that, my team huddled up before the final battle, and shared their resolve to fight for each other and for Fódlan. Scenes like this really got me reflecting on how far my little Golden Deer had come. Anyway, I chose Claude for the S Support at the end.

Not everyone lived to see the end of the game though. I lost Lysithea during the final battle, and didn’t feel like replaying the last turn to try and save her, so…I didn’t. One cool thing I saw during the character epilogues for this playthrough were the strong friendships between a few pairs of characters. Marianne and Hilda, for example. Their joint epilogue talks about how their friendship remained strong after the events of the game, and I thought that was pretty cute. Raphael and Ignatz also had a strong friendship in the epilogue, and it was perhaps even cuter!

I think before I write a review of Three Houses I’ll play through the Blue Lions house as well. I’m thinking about trying the Hard difficulty too, to see how that’s different, but I’m mostly curious to see what maps and missions the Blue Lions have compared to the last two routes I played.

This game had a free weekend on Steam, which actually started before the weekend (Thursday, I think). I’ve had my eye on it a bit, so I had to jump on the chance to try it for free!

Two Point Hospital is a spiritual successor to Theme Hospital, a 1997 game that I haven’t played. Both are simulation games in which you run a hospital and cure patients of fictitious diseases, all the while employing an enormous dose of humor. For instance, patients with Light Headedness literally have light bulbs for heads. There’s also the Mock Star disease which causes people to look and act like a parody of Freddie Mercury. That’s the sort of humor that largely features here: lots of puns and satirical references.

The main single player campaign has you develop several hospitals, gradually unlocking new diagnosis and treatment rooms, which in turn broadens the number of diseases your hospital can treat. Once you complete the first milestone at a hospital, you earn 1 star out of 3 possible, and can advance to the next hospital if you so choose. The way this campaign progress is tracked and new areas are unlocked reminds me a lot of Jurassic World Evolution, although I’m guessing there are other modern simulation games with similar progression. Another similarity the two games share is how Research is shared between all the hospitals in your organization. 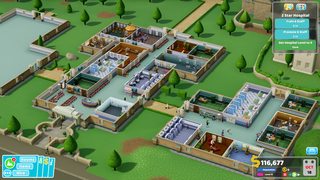 There are also incredibly sarcastic announcements that serve as alerts for current issues in your hospitals. For example, if you have a number of full garbage bins that require a Janitor to empty them, an announcement that says, “This just in: full bins require emptying,” will play. Sometimes announcements don’t serve a gameplay purpose though, and are just there for laughs. For example, I’ve heard one a few times that just says, “Announcement: please listen to announcements,” and I chuckle a little every time I hear it.

By the end of the weekend, I’d played about 6 hours of Two Point Hospital, and the idea of playing more still sounds fun. It’s an entertaining sim with a lot to offer, and it absolutely nails its claymation visual style. The biggest drawback I can think of is that there’s some repetition every time you switch to a new hospital when you have to build at least the first one of each type of room you want the new hospital to have. Maybe I just missed something, but it would be nice to be able to copy rooms from hospital to hospital. As much as I appreciate the option to build and furnish rooms however I like, there’s a limit to how many times I can build basically the same G.P.’s Office before it gets tiring. In spite of that though, I’d still be interesting in buying Two Point Hospital down the road, when it’s going on steeper sales.