After exploring the Sci-Fi movie further, Aigis and the Persona 3 Protagonist joined my team. Now I have all 25 characters unlocked to build a team with. That number is so high, ahh! It’s cool though, there’s lots of flexibility to build whatever kind of team you want by mixing the casts of the different Persona games together.

I’ve continued playing on Safety mode. Again, battles aren’t what I’m playing this game for, as weird as that sounds. The character interactions are my goal. Elizabeth and Theo are so funny, they’ve had some great moments!

Shadows of Valentia is a remake of Fire Emblem Gaiden, which was released only in Japan on the Famicom. I didn’t realize this until reading a bit of the Wikipedia page, but it’s actually set in the same world as the original Fire Emblem game (and therfore Awakening as well), just on a different continent, the continent Valentia. There are a lot of unique mechanics for the series here! I’m not sure if they were all present in the original Gaiden release, but they’re very interesting.

There’s a world map you can navigate, which isn’t new at this point, but was when Gaiden introduced it. More interesting than that, the map contains towns that you can visit. In a town, it sort of reminds me of a point and click game, or maybe visiting towns in The Oregon Trail. You can talk to NPCs, and use the Examine option to find items lying around that you can take with you.

Another big difference from other Fire Emblem games is the inclusion of dungeons. After entering a dungeon, you can control your main character directly in a 3rd-person segment that feels sort of like exploring a dungeon in a Tales game. Enemies roam around the dungeon too, and if you run into one it initiates a regular battle. Treasure chests await the thorough explorer, and I have to say I have had fun with the dungeons I’ve been in so far, although the battles against enemies within them are pretty bland. I don’t think I’d want the feature in every Fire Emblem game, but it’s fun here. It just doesn’t feel very Fire Emblem-ey to me.

On that note, Shadows of Valentia feels different from all the other Fire Emblems in other ways too. There are no “Chapters,” but instead there are “Acts” split into various small skirmishes as you move around the map and battle enemies. Most of these don’t have too much story exposition between them. The story has primarily moved forward at the end of each Act. Honestly, the maps and battles haven’t had a lot of variety so far, they’ve felt a bit similar. Sometimes they’ll have cliffs or walls, but for the most part they’ve been wide open spaces. They are pretty fun, just lacking in variety.

The story is probably the aspect that feels most like Fire Emblem. It feels a lot like the first few Fire Emblem games released in the west. Childhood friends Alm and Celica are separated after knights attack the town of Ram, and their caretaker Mycen takes Celica and hides her away. Alm promises he will find her someday. Mycen continues to take care of Alm in Ram, and trains him as a warrior. Years later, after a coup in Zofia, where Ram resides, an emissary from The Deliverance visits. The Deliverance is a group of freedom fighters who want to take the Zofian throne back from Chancellor Desaix, and they want Mycen to head their army. Mycen declines, but Alm steps forward in his place, and his journey begins. That’s the prologue to Shadows of Valentia in a nutshell.

While Alm tries to end the war through battle, there’s another narrative occurring at the same time from Celica’s point of view. The second Act has you control Celica and her separate band of fighters as she tries to find a peaceful solution to the war by seeking the goddess Mila’s guidance. Since it’s a Fire Emblem game though, this still involves plenty of fighting against monsters and pirates and the like. When I reached the third Act, I was surprised to see that I could now control both Alm and Celica’s armies at the same time, and pursue either one’s storyline at my leisure.

There’s also a ton of voice acting in this game. It’s actually pretty cool, although I might just think that because some of the voice actors are familiar to me since they also voice characters in Persona 5. It seems like most lines are fully voiced, which is unheard of for Fire Emblem. I like it though, I think it helps the characters feel more real and charming, and there are some really charming characters! Celica herself is a cool character. Alm has the noble Claire on his team. On Celica’s team there’s also Mae, who is super funny and cute!

I’ve been more or less playing both Alm and Celica equally so far, though I have favored Celica. Her army and storyline are more interesting to me. I’m playing on Classic mode, Normal difficulty as I’ve done for all the modern Fire Emblem games, and it can be pretty challenging! I’ve already gotten a Game Over when Celica fell in battle after I was a little too careless. I haven’t had to reload a save yet when a unit dies in battle (other than when Celica died and it was Game Over) thanks to the “Turnwheel” feature. Early in the game, you gain access to Mila’s Turnwheel, which lets you go back in time and undo your actions for up to several turns in the past. You can use it a few times per battle too. This has been really helpful getting me out of a situation where a unit has died, allowing me to redo my previous turn to keep them out of harm’s way or get them the healing they needed. It streamlines the process quite a bit, which is nice!

Excitement following the announcement of Animal Crossing: New Horizons for the Switch has gotten me playing Animal Crossing on my 3DS again. It’d been 5 months since I last played, as my villagers all reminded me, so my character’s hair was wild.

The town was also overgrown with weeds, and I think this triggered an event with the sloth character, Leif, from the flower shop. He was absent from his shop, but I found him sleeping in town. After talking to him a bit, he asked if I would pull up all the weeds in town while he counted how many remained. I agreed, and it started a timer and gave me a weed countdown! It took me forever to find the final weed, but I found the pesky thing eventually and got a lily record player for my troubles.

From selling things to the Nooklings (mostly fossils), I finally got enough money to pay off the debt from my last home renovation! This time, Nook offered me a lot of options on how to expand next. I decided to add a basement, because I always thought that was a cool addition in the original Animal Crossing. Nook told me it would cost 428,000 bells! Well…it’s pretty small, but I like it anyway.

Another new expansion pack for The Sims 4 released this week. This one is Island Living, and as the name suggests, adds a new world called Sulani focused on tropical island life.

I haven’t gotten into the pack too much. PatronusLight tells me it’s pretty cool. It seems like there’s a lot of new items in Create A Sim and Build Mode, and you can build some very cool island homes with them (or download them from the Gallery)! 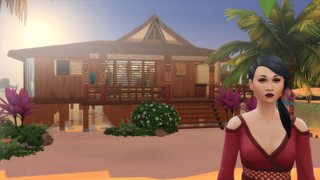 One thing I did play around with a bit was the new type of occult Sim - mermaids! My Sim, the immortal vampire actress and Hero-of-Strangerville Kayleigh Covarrubias, moved to Sulani to escape the humdrum of her regular vampire life. She wasn’t looking very enthused immediately after I moved her to the sunny island paradise. I’m not sure why. I mean, yeah she’s a vampire, but she is immune to the effects of the sun.

Anyway, I made her a mermaid roommate, Bret Ogle. His thing is that he doesn’t wear a shirt or shoes with any outfit.

Like vampires, mermaid Sims have a regular form and an alternate mermaid form, where their fins are revealed, and you can customize both forms independently in Create A Sim. I wanted to make his mermaid form really wild. I feel like PatronusLight and I did a good job at this.