The developers at Brace Yourself Games must be longtime Zelda fans, because what they’ve brought to life with Cadence of Hyrule - Crypt of the NecroDancer Featuring The Legend of Zelda is both a loving homage to the Zelda franchise and a wonderfully fun game on its own.

Cadence of Hyrule looks and feels a lot like a 2D Zelda game, but with the same rhythm-roguelike fusion of gameplay present in Crypt of the NecroDancer. This fusion of rhythm and roguelike gameplay mechanics is every bit as fun and compelling as in the original game. With its roguelike roots, gameplay is turn-based, and places a heavy focus on randomly generated environments with enemies to fight and treasure to find. It’s also a rhythm game since every turn is timed to the beat of the music.

The classic 2D Zelda formula: explore the overworld, fight enemies, collect new equipment, solve puzzles, and find dungeons to tackle. I’d say that about sums up all the main components of a Zelda game, right? Cadence of Hyrule expertly brings all of these elements to the table, to give it that classic 2D Zelda feel.

The overworld features classic locations like Gerudo Desert, Lake Hylia, The Lost Woods, and Kakariko Village. While these are randomly generated at the start of your playthrough and remain the same throughout, the floors of the dungeons are randomized every time you die.

Each dungeon has about 3 levels. You can only challenge the next part after you beat the prior one, and they are randomized after a Game Over. I really enjoyed Cadence of Hyrule’s dungeons, but it did seem like they were less difficult than those in Crypt of the NecroDancer. I didn’t find that to be a bad thing though, the fact that I didn’t have to make it through all 3 levels of a dungeon without dying was really nice.

The Heart of The Legend of Zelda 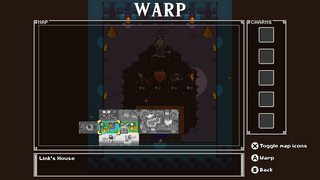 Like most, if not all, Zelda games, there’s a heavy emphasis on exploration. You’re given free reign to explore wherever you want from the beginning, but a few areas won’t be immediately accessible.

Heart Pieces are strewn around the overworld and dungeons, and you’ll definitely want to collect as many of those are you’re able to, because every four increases your total health, just like in most Zelda games.

Lots of items from throughout The Legend of Zelda’s history can be found in this incarnation of Hyrule. From common staples like the Boomerang, Bow & Arrows, and Bombs, to A Link to the Past classics like the Power Glove, Ice Rod, and Cane of Somaria, and even The Wind Waker’s Deku Leaf, inspiration has been drawn from throughout the series in terms of the gear present. Though, to be fair, it seems like more of these items come from A Link to the Past than any other game.

There are even a few original items. The Lightning Arrows are something I don’t remember seeing in any Zelda game. The Pegasus Boots were also reworked into the Pegasus Anklet, but have the same function and let you dash forward. I also found an item called the War Drum that let’s you skip a turn to increase your attack power on the next turn. 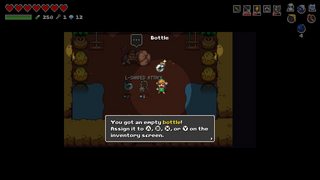 Multiple Bottles can be found as well, and they’re perhaps the best item to find. This is because you can fill them with Red Potion, which in this game heals you to full when you die. Who needs a Fairy in a Bottle when Red Potion is that strong, right?

There’s also the occasional puzzle to solve, usually involving pushing blocks to reach higher elevations. These are simple puzzles though, simpler than the puzzles Zelda usually has. It’s still nice that they’re here, as it further reminds me of the Zelda theme, but the puzzles are far from the main focus.

The pixel art throughout the game looks great. It’s very reminiscent of A Link to the Past, but with its own original flair.

Play as Link, Zelda, or Cadence 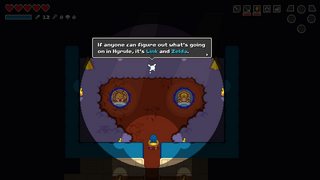 Another cool feature is the option to play as either Link or Zelda at the beginning of the game. There’s a short tutorial where you play as Cadence, the main character from Crypt of the NecroDancer, but after that you’re prompted to choose between Link and Zelda. Whoever you pick is who you’ll control for the beginning of your run until you unlock another character. Each of them has unique abilities, and a few late game weapons can only be used by specific characters. By the end of your run, you’ll most likely have unlocked the other two characters as well, but the character you choose to begin with will shape the start of your journey substantially.

Link plays how you’d expect if you’ve played a 2D Zelda. He can use shields to block and deflect attacks. You can also unlock his Spin Attack after finding it in the world. The Spin Attack takes a beat to charge up, after which you can unleash it to damage all surrounding enemies. It was a pretty cool ability that I used in a few tight spots, but I didn’t find myself using it very often.

Since I picked Link to start my playthrough, I got pretty used to him and didn’t play as Zelda much. When I did, Zelda’s Din’s Fire ability was really cool though. It’s basically a magical remote controlled fireball! Instead of a shield, Zelda has the defensive spell Nayru’s Love. It functions similarly to Link’s shield, but requires more precise timing to reflect attacks and can reflect both projectiles and melee attacks.

Of course, the heart of any rhythm game is the music, and Cadence of Hyrule has a stellar soundtrack. Lead composer Danny Baranowski has crafted a soundtrack that will have you dancing in your seat as you navigate the landscapes of Hyrule listening to remixes of familiar tunes from the Zelda series. Songs like the Gerudo Valley theme from Ocarina of Time, or the Ocean/Sailing theme from Wind Waker have been lovingly arranged and remixed for Cadence of Hyrule, and the result is sweet, sweet music to anyone’s ears, but to Zelda fans especially.

Sometimes I found myself jamming along to the music, not really thinking about it, and then suddenly realizing exactly what original Zelda track the song was a remix of. Those were cool moments, they really showed me the originality and inventiveness of many of remixes.

As much praise as I have to shower Cadence of Hyrule with, it’s not perfect. I mean, no game is perfect. There were a few areas I could criticize if I was really nitpicking.

Lots of upgrades, but they are rarely required

You get a lot of different items as you explore, but many of them were never explicitly required. In main Zelda games, practically every item lets you go somewhere you couldn’t go before, and the common design is to have an item you get in a dungeon be required to advance to the end of that dungeon. In Cadence of Hyrule, this isn’t the case. Very few upgrades seemed to be required to advance, there were only a handful of times I can recall needing a specific item to move forward. Most were simply different combat options.

I can understand why the design is this way though. Due to the randomly generated nature of the game, it probably wasn’t feasible to have many instances where a specific upgrade was required, because it would increase the complexity of randomly generated the world. Like I said earlier though, there were some cases where I needed a specific item to advance, and that was really cool to see!

And even though they’re not required for exploration very often, the wide assortment of upgrades do give you a lot of flexibility in battle. The Boomerang, Bombs, Bow & Arrows, Fire Rod, and Deku Leaf are just a few of the different tools at your disposal for dealing with enemies.

Early on, Cadence of Hyrule gave a considerable, but fair, challenge. I got many Game Overs as I worked to learn enemy movements and attack patterns, and struggled to keep my cool when facing hordes of enemies all at once.

At a certain point, the game became really easy, and the frequency of my Game Overs dropped dramatically. I think I can pinpoint this moment to around when I found a broadsword. The broadsword attacks the square immediately in front of your character and the squares to the side of that one. This makes dispatching enemies much easier than before. Nearly right after I found the broadsword, I also found a Great Fairy to imbue it with a multiplier based damage bonus, so the more I got into the groove, the more damage I dealt, up to three damage per attack. Couple that with the fact that I probably had around nine hearts at that point, and it was a recipe for steamrolling every obstacle the game threw my way.

Just because the game was easy at that point didn’t mean it wasn’t fun though. Far from it! I found it really satisfying that I could take down enemies without breaking a sweat, as it was a far cry from my abilities at the beginning of the game. For some though, the difficulty progression might not be hardcore enough. There are options when starting a new game to increase the stakes though, like the Permadeath Mode where you only have one life, so those looking for a greater challenge may find those options enjoyable.

I would wholeheartedly recommend Cadence of Hyrule to anyone who think it sounds remotely interesting, and definitely to Zelda fans looking for a different experience. It’s an excellent game loaded with fun, and doesn’t have any serious issues. I will absolutely be completing another run of it someday.

The fact that this game exists feels like a dream come true. Nintendo usually holds their IPs close, so the fact they partnered with a small indie studio is almost unbelievable. I don’t think I’m alone in hoping that this isn’t the last Nintendo/indie crossover we see. Actually, I would probably love it if wasn’t even the last Crypt of the NecroDancer/Nintendo crossover! Bring on Crypt of the NecroDancer Featuring Metroid!