This week, I finished exploring the dino-filled Junessic Land dungeon. It was fun…for the most part anyway.

After reaching the end of Junessic Land, there’s a boss battle…and man, that boss is tough. I first attempted it on normal difficulty. My party was promptly wiped out. I then attempted it on Easy difficulty. My party was promptly wiped out. The boss starts out easy, but eventually he gets 3 other cronies to back him up. They cronies cast buffs on him, and he begins using Confusion-inflicting moves that can target your entire party, and uses more powerful damaging attacks too! It was a bit much for me, personally. After switching to the Safety difficulty, where you can fully revive your team if you fall in battle, with no consequences, I was finally able to cheese my way through this fight. The boss and his cronies still took my team down 3 times though. Sheesh.

Another lock on the exit door unlocked, 2 left!

The next dungeon is a futuristic, sci-fi themed one. Here, I’ve encountered the characters from Persona 3, and they’ve joined my party. This brings the total number of available party members to a whopping 23! Since you can only have 5 people in your active party at once, this allows for a lot of different party combinations. It’s a little overwhelming, but I’m mostly sticking with the party I’d already been using, since only the characters in your party gain experience and level up. Although, I did add Shinjiro to my party since he has no elemental weaknesses, and was around the same level as current party members.

I’ve continued playing on Safety difficulty after that boss battle in Junessic Land. The battle system in this game just isn’t something I feel like really having to try at anymore, so I’m just going to lean on Safety and revive my party whenever they get wiped out in battle. I’m playing for the characters more than anything else.

Playing just one Persona game this week is hardly enough, right? Which brings us to the next game…

I played through the Story mode here this week. Really I was just playing the dances, I skipped all the dialogue bits since I’ve played the Story before on the Vita. The Story Mode dances can only be played on Easy or Normal, so they weren’t a challenge. They were still fun to watch and listen to while playing though. 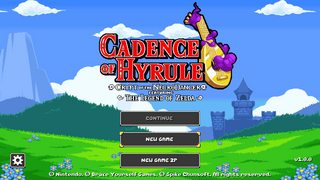 The premise here is that the evil Octavo has taken over Hyrule Castle and spread all sorts of nastiness across the land. You need to defeat his guardians hidden in four dungeons around Hyrule in order to gain access to the castle and defeat him.

After a very brief but effective tutorial where you play as Cadence (the main character of Crypt of the NecroDancer) after she finds herself mysteriously teleported to Hyrule, you have a choice to play as either Link or Zelda. I picked Link, but it’s really cool that you have the option to play as Zelda! You can unlock whoever you didn’t pick, and Cadence, by finding them during your playthrough, so you’re not locked into one single character for your entire run.

Like Crypt of the NecroDancer, the gameplay can be pretty challenging at times! I got a number of Game Overs early on when I had just a few hearts and wasn’t that familiar with enemy movement patterns. Luckily, dying is penalized pretty fairly. You lose common equipment, like rupees, your shovel, torch, etc., but you get to keep certain permanent upgrades like diamonds, your shield, boomerang, bombs, and so on. You can also respawn at any Sheikah Stone you’ve previously unlocked, so it doesn’t feel like starting over after each death.

The pixel art Hyrule looks great. It seems like they drew lots of inspiration from A Link to the Past, but its also infused with the unique charm Crypt of the NecroDancer has. A common enemy in the series, Bokoblins, for instance raise their arms before they move, and it’s a pretty cute little dance move. This is the same as the zombie enemies in Crypt of the NecroDancer, but it works well for the Bokoblins here too.

There’s also co-op, but I haven’t tried that yet! You can either start a New Game in co-op right away, or play co-op on a 1 player save once you unlock another hero.

My exploration took me to the Lost Woods first, and after traversing it using the Tingle Dowser, I reached my first dungeon, Lost Swamp! As my first taste of a real dungeon in Cadence of Hyrule, it was excellent! You get a mini-map of the dungeon floor you’re currently on. The dungeon was separated into 3 different levels, and once you unlocked one you could return directly to that level even after dying. This was really nice, because I did die a number of times when attempting the levels! Eventually, you’ll find the Boss Key and be able to unlock the door to the boss. The dungeon felt a lot like Crypt of the NecroDancer’s levels, except you don’t have to restart from the first floor of the dungeon every time if you die.

The first boss I faced was Gohmaracas, a Queen Gohma-inspired maraca guardian! Its attack patterns weren’t too difficult for me at this point. I was well equipped, and it didn’t have too much health anyway. After defeating Gohmaracas, the magical Maracas were mine!

After that, I explored the overworld a lot more. Found Kakariko Village, where I found and unlocked Zelda, Death Mountain, and picked up a few upgrades like the Deku Leaf and a Bottle on the way. 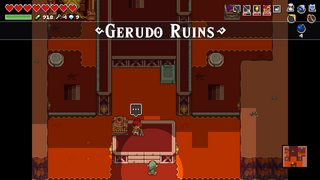 Eventually, I reached another dungeon - Gerudo Ruins. This was the fire-themed dungeon, and it had a bunch of Stalfos and some gecko-like enemies that turned to stone when you hit them. I’m not sure what those are really called. I was really well equipped at this point, so the dungeon was a breeze. Octavo again awaited at the end, and brought the Bass Guitarmos Knights to life! I had enough heart containers and a strong enough weapon here that they were no threat. After defeating them, the Bass Guitar was mine!

By then, I’d explored most of the map, so I pretty much knew where to find the last two dungeons. The Frozen Grotto held the guardian Wizzroboe, whom I defeated to claim the magical Oboe. The Temple of Storms held Gleeokenspiel, which I defeated and claimed the final magical instrument, the Glockenspiel!

With the four guardians defeated, it was time to take on Hyrule Castle and challenge Octavo himself!

Without spoiling too much, I’ll say that the final battle was great! Octavo summons pieces of the four guardians, and it’s sort of like a boss rush while you try to damage Octavo as he teleports around as well. There’s also a really cool part where all three playable characters are controllable at once, as the other two show up to help you during the final showdown!

In the end, Link and Zelda use their pieces of the Triforce to send Cadence back to her own world, and all is well in Hyrule once again!

I’m looking forward to writing a review for Cadence of Hyrule soon! Developer Brace Yourself Games has done fantastic work here. They absolutely the Legend of Zelda franchise justice. I will for sure be playing another run eventually! There are leaderboards for fastest completion time and fewest steps, and my time of a little over 4 hours is super slow compared to the top scores at the time! I have to step up my game, I guess!