Square’s Parasite Eve released for Sony’s PlayStation in North America on September 9th, 1998. I finally got around to playing it in 2019, and even after all these years, it was still quite an experience!

If I had to describe Parasite Eve’s genre in just a few words, I’d call it a “survival horror JRPG.” All the elements of a classic JRPG are present: a large focus on characters, active time turn-based battles, exploration, and regular RPG systems like stats and equipment. Additional elements typical of survival horror are then mixed into this, such as inventory management with limited space, limited supplies, and foreboding environments.

The story takes place in New York City. Having the game set in NYC added to the appeal for me, because it’s a unique setting for a video game of its era. For a JRPG, it’s an even more unique setting. Beginning on Christmas Eve, 1997, NYPD officer Aya Brea is on a date at the opera. Out of nowhere, the entire audience undergoes spontaneous combustion. Only Aya and actress onstage are unaffected. This is just the beginning of a six day ordeal in which Aya will frantically pursue the powerful, parasitic entity that calls itself “Eve.”

This story actually serves as a sequel to the 1995 book of the same name by Hideaki Sena. The events of the book are referenced in the game vaguely from time to time, but it’s not vital that you read the book before playing the game. I had read a synopsis of the book’s plot beforehand out of curiosity, but even that wouldn’t be required. The game’s plot stands well on its own.

The plot largely revolves around mitochondria. Basically, Eve began as mutated mitochondria, and has the power to manipulate the mitochondria of others. Usually by setting them on fire. It sounds like the plot of a cheesy horror movie, but I think it works to establish an action or thriller movie feel for the game.

The cast of this action movie plot are what really make it shine. I’m not sure exactly how it happened, but I ended up liking the characters a lot. There’s really not a lot of dialogue in the game though, so that makes it surprising that these characters grew on me so much. The dialogue that is present conveys a lot about the characters’ personalities. There’s no voice acting, but characters are given such strong speech mannerisms that by the end of the game I felt like I could hear what they sounded like anyway.

The story moves forward at a satisfying pace. There are never extremely long periods of exposition. You’re given details gradually, and have to piece together bits of the backstory on your own to some extent. This allows the main plot to move along comfortably, and keeps the action moving. 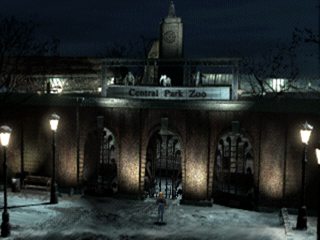 Due to its contemporary setting in NYC, exploring the environments during the Eve incident makes for some great contrast. The locations are largely ordinary, but the creatures you run into and fight are anything but.

Supplies like ammo and medicine are limited, especially at the beginning of the game. I found myself really needing to make an effort to conserve ammo early on, and every chest I found containing precious ammo was a godsend. As you progress and obtain more powerful weapons, you’ll likely wind up with more ammo than you need, but the scarce nature of it in the early game definitely made a lasting impression on me and shaped my experience. Even when I had plenty of surplus bullets, I was always glad to get my hands on a few more rounds, just in case!

Finding a nice new piece of armor or a strong weapon feels really satisfying. In the early game, the base stats of the equipment might be better than the stats of whatever you currently have. In my experience, I found I wasn’t finding better weapons or armor than what I currently had the further I got into the game. Each new piece of equipment still opened up lots of possibilities though thanks to the Tool system.

Every Tool that you find brings a rush of excitement at the prospect of boosting your favorite piece of equipment, or moving your accrued bonuses from an older weapon or armor to a new one with higher bases or a nice special effect. There are even rare Super Tools, but honestly I didn’t find a single one of these in my whole playthrough! I imagine they’re more exciting to find than regular Tools, and can do something really special.

Combat is essentially an “active time battle,” as seen in prior Square games, where you have a meter that fills up as time passes in battle. Once the meter is full, you can direct Aya to take an action, pausing time once decide to do so. The difference between Parasite Eve and other games with similar systems is that you can freely move Aya around, even when the action meter isn’t full. This allows you to dodge enemy attacks, and control the distance between you and the enemies. This brings in an element of learning your enemies’ attack patterns so you know how to move in order to avoid them, and keeps combat feeling very engaging as you regularly encounter new enemies with new attack patterns. 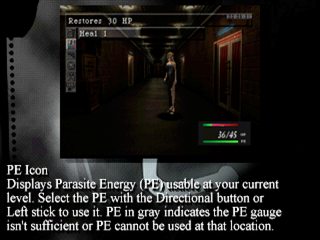 Aya can also use Parasite Powers in battle. This functions as the game’s magic system, and lets Aya use abilities such as Heal, Haste, or powerful attacks like Energy Shot. Parasite Powers expend Parasite Energy, which is a second meter that fills during battle more gradually than the action meter. When activating a Parasite Power, time in battle is completely stopped, which is nice because you can sometimes get yourself out of tight situation by firing off an Energy Shot that they can’t interrupt, hoping that it’s enough to defeat the enemy. I also found myself using Heal, and the powered up versions of it, very liberally throughout the game in order to keep my HP up without wasting healing items.

When playing older games today, they often seem to lack clear objectives. For instance, when I was playing the original Phantasy Star somewhat recently, I would have likely been completely lost at certain points if I hadn’t been following a guide. Some may say that this is just a change in game design, and that older games just chose not to hold your hand, and instead made you figure things out yourself. I think that’s true to some extent, but I also believe that technical limitations forced developers’ hands, and they simply couldn’t implement clear messages to the player on what their next goal was in many cases. 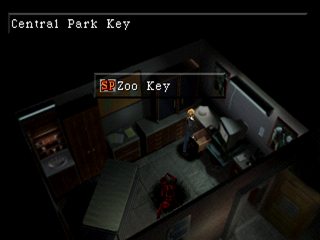 Parasite Eve almost never made me feel clueless as to how to progress. There were only two instances in my playthrough that I can remember feeling thoroughly stuck. Both involved keys I needed to find to unlock a door. In both instances, I just looked up a guide to figure out where the key I’d missed was, and moved on. Had I been more thorough in my scavenging and more aware of my surroundings in-game, I might have found the keys on my own. Either way, the next task is usually outlined quite well in-game, and rarely had me staring dumbfounded at the screen.

I haven’t played much PS1, so I can’t comment much on how Parasite Eve compares to its contemporaries. The FMV cutscenes in it look quite aged by today’s standards. Chances are, if you’re interested in playing a PS1 game today, you have some idea of what it’ll look like, and you adjust your expectations accordingly. Had I played this game when it released, the graphics probably would have blown me away, for what it’s worth.

Yoko Shimomura is credited for the music in Parasite Eve, and she did phenomenal work here because the music is perfect for the atmosphere of the game. The battle theme is fantastic, and always got me hyped to fight some enemies. And the song in the credits, “Somnia Memorias,” wow. That song felt perfect for the credits. The music works to build excitement when the action rises, and to build apprehension during tense moments, like before an encounter with Eve. But Parasite Eve also makes excellent use of silence to build tension. Certain areas of the game are completely silent, save for the sound of your footsteps. This always made me a bit anxious at what might be waiting for me in the near future.

When playing Parasite Eve, there was one comparison that kept popping up in my mind. This game feels like watching your favorite old movie. Like a movie that came out decades ago, but you still enjoy watching it. Visually, it doesn’t look as good as it used to, but it still has all the charm it did when it first came out.

My very first playthrough was in 2019 and I am so glad I finally played it. Sure, some parts of it might be cheesy, but those just add to its charm. Parasite Eve isn’t a perfect game, but it is a whole lot of fun. I definitely recommend it to any RPG fan looking for a new experience, as long as they don’t mind going back to PS1 era graphics!