I finished Parasite Eve this week! It took me later in the week than I expected. Since I’d been mostly playing Persona Q2 instead of this one.

Day 5 takes Aya on quite a long journey. From Chinatown, to the sewers, the subway, and then finally the museum. There was a centipede boss in the subway that I struggled with, I got a few Game Overs before I finally managed to scrape by. 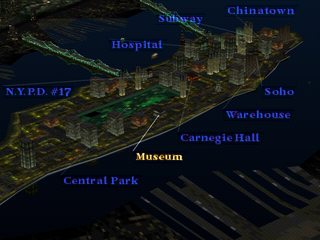 I got a little stuck during Day 5 in the museum and wandered around a bit because I didn’t know where I to get a key I needed to progress. Random encounters started to grate on me just a little during this point. I did get some good experience and ammo drops from all the enemies though! At that point, I just looked up a map online to see where the key I needed was. Naturally, it was in a pretty obvious area I should have checked out much sooner.

Aya fights dinosaur enemies in the museum. That was pretty awesome, especially once I got an upgraded Grenade Launcher. Then I was just blowing them away and felt super powerful! You also fight a T-Rex boss, which was just as cool as it sounds. It wasn’t very tough, it went down after I put enough grenades into it!

At course, you fight Eve at the end, at the base of the Statue of Liberty. This was a tough battle, her attacks do a bunch of damage if they hit, and it took me a while to learn the patterns to be able to avoid them at least some of the time. Plus, her body is made of 3 different parts, and they all have high HP. Nothing my trusty Grenade Launcher couldn’t take care of though. After this, she has a second form. Despite being very fast in this form, she didn’t pose much of a threat this way, and went down quickly. 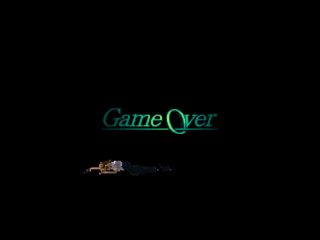 Is that really the end…? No! It’s not. In fact, I died many, many times after this. I had to look up some helpful tips and tricks. I’m glad I was playing this on an emulator because I would not have wanted to try it without save states. Eventually, after numerous game overs, I made it past the part giving me trouble! In the spirit of avoiding spoilers, I’ll say no more on the subject!

After it’s all over, Aya breathes a sigh of relief. The ending sees her returning to the theater to see the opera she was seeing in the beginning of the game. The ending I got takes quite a sharp turn in the final moments. There’s actually an area and an alternate ending only available in New Game+. I don’t have immediate plans to play that though, because I think the regular ending fits the thriller/horror movie kind of vibe Parasite Eve goes for.

Then credits roll. The music during the second half of them is an awesome track. It’s called “Somnia Memorias,” and I recommend giving it a listen (here’s a YouTube link) if you’re looking for a chill track sometime. It’s got a really cool, prominent bass line! In fact, the music throughout the game fits the mood perfectly. Big thanks to Yoko Shimomura for that! 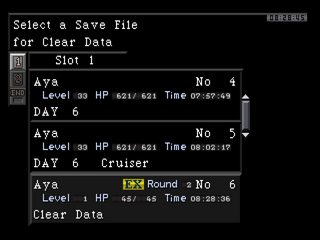 Once the credits are over, you have the option to save your clear data. Honestly, I can see myself replaying Parasite Eve using my clear data to play New Game+ someday. It was a fun experience! Not perfect, but I had a lot of fun with its battles, I enjoyed the story, and it doesn’t overstay its welcome.

There are actually 2 other games in the Parasite Eve series. There’s a sequel on the PS1, and it has a similar rating on Metacritic to the first game. However, I’ve heard it doesn’t capture the same spirit as the original. The sequel has fully real-time battles, making it closer to Resident Evil. There’s a 3rd game on the PSP called The Third Birthday that goes full third-person shooter, and has the lowest Metacritic score of the 3. Neither of those sounds like a “must play” to me, so I’m content having just played the first game in this series. 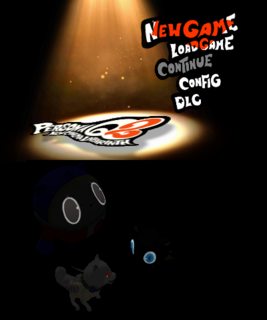 This game just came out in North America on June 4th! It’s a spin-off of the Persona series, so of course PatronusLight and I pre-ordered the special edition. It’s a sequel to the earlier 3DS title Persona Q: Shadow of the Labyrinth. To be honest, I wasn’t too fond of the first game. It was okay, but it never really clicked with me and by the end I found it to be kind of a chore. Still though, the promise of Persona 5 characters and the fact that it bears the Persona label were enough to get me to pick up the sequel.

It’s basically the same premise as the first game. Characters from several Persona games meet up, and it’s basically like a fanfic. But the focus is on Persona 5’s cast this time. The Persona 5 characters find themselves thrown into a strange “movie world” that they can’t escape until they find 4 keys to unlock the way out. From there, you explore dungeons which are inside movie theater projection screens, draw your own maps on the bottom screen of the 3DS, all the while fighting random encounters in a turn-based battle system.

My biggest complaint about it is that there’s no English dub. All text is translated to English, but all character voices are in Japanese, as in the original Japanese release. I don’t mind that in itself, but the issue I have is that not all the Japanese voice lines have subtitles! Certain character lines in battle have no subtitles, and no option to enable subtitles for them. They don’t seem to be integral to gameplay, and are probably just along the lines of “Nice shot!” and other encouraging phrases, but it still would be nice to be able to read what they’re saying when the lines are audio only.

You can change the difficulty during your playthrough, except on “Risky,” the hardest difficulty. This is nice, it made me confident in starting on Normal, but I might move down to Easy if I hit a difficulty spike later on. And if Easy is too hard, there’s always “Safety” mode! I loved Joker’s animations during the difficulty select screen. First of all, he’s eating popcorn when hovering over Safety and it’s so cute. Plus, when you switch difficulties the way he quickly moves as a blur to get into position for the newly selected difficulty just looked really cool. 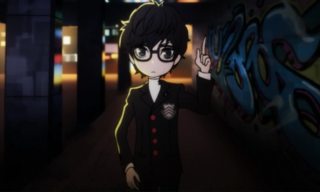 Persona Q2 has some nice quality of life improvements over Persona Q. Seeing the count of inventory items and max inventory count when getting enemy drops is nice. Your party is automatically healed when leaving the labyrinth, which is really nice. “Main character” Persona 5 protagonist doesn’t always have to be in party (unless you’re playing on the hardest difficulty) and it’s nice to have that option, even if I might not utilize it.

The design of the menus and main hub are solid and usable. The music is excellent, as I expect from a Persona game, even if this one is a spin-off. The characters are great, it’s awesome to play another game with the Persona 5 cast in it! Plus, seeing characters from across Persona titles meet up is wonderful. All Out Attacks during battle look fantastic.

Battles are very similar to those in Persona Q, and are fun even if don’t draw me in as much as main Persona games. They can feel a little grindy sometimes, but in the end it’s still an enjoyable system. I feel like the fact that I try to play it like it’s the same as a main Persona battle system hurts me, but I think I’m beginning to really grasp the mechanics of the Persona Q battle system.

I got my first game over during first attempt at the first dungeon’s boss. The game over sequence is cool at least, it’s in a movie theater. Some messages show on the screen and then you get a “The End” instead of a typical Game Over.

My second attempt at the first dungeon’s boss was much more successful. My party members died a lot, but I was able to make it through by using revival and healing items. With the first key in my hands, one lock on the exit door has been unlocked! There should be 3 dungeons remaining but it wouldn’t surprise me if there was a 5th dungeon at the end.

The 2nd dungeon is a Jurassic Park parody called “Junessic Land.” I really like the theme of this dungeon, since I really like Jurassic Park! I’m not too far in yet from what I can tell, but I have gotten far enough in to get a number of Persona 4 characters to join my team.