On my way to the end of the game, I did a few more Paralogue missions, including one to recruit Kaden’s daughter, Selkie. I didn’t use her at all though, Kaden’s stats were better even though both of them were around the same level when Selkie joined.

More units promoted, Hinata became a Master of Arms, as did his son, Hisame, shortly after I recruited him. I never used Hisame either, besides in the last 2 chapters when I put him in and always paired him up with Hinata, to boost Hinata’s stats.

The late game chapters see the avatar fighting their Nohrian siblings, similarly to how Conquest pits you against your Hoshidan siblings towards the end. Fighting Leo was really easy actually, the small map allowed me to reach and defeat him very quickly, completing the map in 2 turns. Likewise, the chapter in which I fought Xander also only took 2 turns! 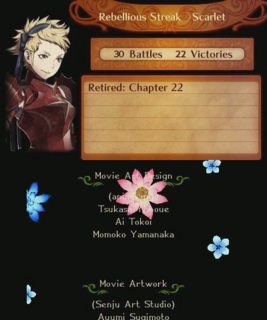 I lost Scarlet the Wyvern Lord a few chapters before the end. She was the only wyvern rider I got in Birthright. I had no real attachment to her. She joins as a promoted class, so I ended up not using her right away because she was stronger and a higher level than my other units at the time. She ended up getting neglected. Eventually, a chapter allowed me to have more units than normal, and I had room to use her. It didn’t go very well for her! But like I said, I wasn’t too attached to her, so I just let her fall.

Hinata fell as well during the final battle. He had fallen a bit behind in levels, so his stats were just dwarfed by the strong enemies in the Endgame chapter. I was sort of surprised he was the only one to fall, honestly. At least he got to slay a lot of enemies over the course of my playthrough.

I beefed up my whole team with a bunch of stat boosting items and tonics before the final battle, so that probably helped give us an edge. This final battle only took 4 turns, since I knew better than to let the enemy reinforcements keep coming and overwhelm me. I basically defeated only those enemies that I needed to in order to reach the final boss as quickly as possible. 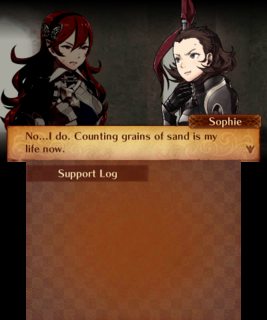 Birthright was a lot of fun. Much more laid back than Conquest. Maps were often just stat-driven numbers games instead of Conquest’s strategy-dominated death marches. I’m not saying Birthright took all the strategy out, but it’s definitely less focused on tactics than Conquest is. Character-wise, it also had a lot of likeable characters and fun companions. I enjoyed the cast every bit as much as Conquest. I feel that between the two, I would prefer Conquest, primarily because the focus of Birthright is the Japanese-like Hoshido nation, which was a cool twist in a Fire Emblem game, but it just didn’t feel quite as much like Fire Emblem as Conquest’s ebon-clan Nohrians did.

The story of Birthright fills in some gaps and answers some questions I’d had after Conquest, but…all in all, it’s still not complete. There’s one piece left in the puzzle, and its name is Fire Emblem Fates: Revelation! Onward we go! 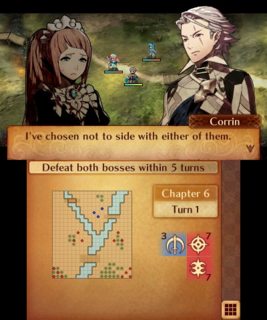 Upon choosing the Revelation path in Fire Emblem Fates, instead of siding with Hoshido or Nohr, the avatar chooses to betray neither. However, both sides decide that the avatar is a traitor then, and you begin this path with the avatar having made enemies of both sets of their siblings. Only a few allies stand alongside you initially. Azura and Felicia were Corrin’s only allies.

So far, Revelation has had a few unique maps, but mostly reuses maps from Birthright and Conquest. The new maps are pretty interesting though, some of them bring back what is almost a Fog of War mechanic. In one, you have to break through walls of ice, revealing pockets of the map where enemies wait in ambush. This adds some variety and I found it to be a refreshing change of pace.

Eevee learned the Secret Technique “Sea Skim” this week, which is a replacement for the Surf HM and allows me and Eevee to travel across bodies of water on a surfboard.

Even though my Eevee and other members of my team had reached the required level 45, I took a detour before I went back to Saffron City’s gym. After using the new Sea Skim ability to reach the Power Plant, I caught a number of Electric-type Pokémon. Electabuzz, Voltorb, and Magnemite were among those I encountered and caught.

But, the one I was really there for was Zapdos, one of the 3 legendary bird Pokémon of Kanto. After wiping out my entire Ultra Ball and Great Ball stock, I finally caught it after it broke dozens of Poké Balls!

After that detour, it was time for my team to challenge the Saffron City gym. The inside of the gym looks so cool!

Gym Leader Sabrina’s team had me struggling a bit. Their psychic type moves took down my Victreebel when I tried to use it against her Slowbro, and my Nidoqueen was defeated equally quickly when I switched it out to use healing items on my other Pokémon. My strategy for taking them down was alternating between Fearow’s U-Turn and Eevee’s Baddy Bad attacks. In the end, the Marsh Badge was mine!

That wraps up my adventures in Kanto this week. I’m sitting at 6 out of 8 badges collected! Here’s a look at my current party. It’s not the most balanced, as Sabrina’s Psychic focus did prove difficult, but I like it!