Over the course of the week, some units reached level 20 in their base class, so I promoted them with Master Seals. Orochi became an Onmyoji, a strong mage, Kagero became a Master Ninja, Takumi is now a Sniper, and Kaden is a Nine-Tails. Kaden is part of a race that can shapeshift into foxes. What’s interesting to me is that the beast-shifting classes of Fates have promoted classes at all. In most Fire Emblem games that have shapeshifters like that, they usually don’t have a promoted class and just have a higher level cap.

Some of the Paralogue chapters I’ve had to restart when I slipped up and lost a unit. Similarly to Awakening, I’m finding that some of the Paralogues are pretty tough right when I’ve unlocked them. Just as in Awakening, my plan is to try them once or twice, and if I fail, put them on the back burner for a bit to level up my units some more before I try them again. This has been working pretty well for me so far! I feel like in Birthright the enemy units in the Paralogue scale to your army’s level to some extent though, whereas I don’t know if Awakening had scaling like that? I’m just guessing there though, I don’t know how the underlying mechanics actually work here.

During the Paralogue to get Takumi’s son, I actually lost a unit that I didn’t feel was worth restarting for, Reina. While she did seem like an interesting character when she was introduced, she can only form a Support Link with the avatar, so in that regard she’s not very good. Also, she starts as a Kinshi Knight, which is a promoted unit. However, her stats were about the same as my un-promoted Subaki, a Pegasus Rider. So when I lost Reina, it was kind of a “meh” moment, and I kept playing the chapter.

Sofia, Silas’s daughter, is in my army again this time around. Since Silas joins you regardless of which path you pick, you can always get Sofia in your party. However, this time her mother is the ninja Kagero, and since the mother determines the child’s hair color, Sofia is dark-haired this time around. She also inherited Kagero’s Locktouch ability, so I have a Cavalier who can open doors and chests without a key! There’s probably better abilities for a Cavalier to inherit, but it’s still cool in my opinion. Sofia was pretty good last time around, I’m hoping I can train her up again and she has solid stats once more. I haven’t really been using Silas, and the Hoshidans don’t have any horseback riding units themselves, so it will be cool if she can fill that Paladin/Great Knight niche.

I’ve advanced several chapters further in the main story. In Conquest, I found myself pitted against the avatar’s Hoshidan siblings and their retainers in many chapters. Naturally, in Birthright it’s the opposite, and I’ve been fighting familiar Nohrian faces who I had fought alongside during Conquest. My army just fought Camilla and her retainers in one chapter, for instance. These familiar faces also included Charlotte and Benny in one chapter, and my army cut them down remorselessly. 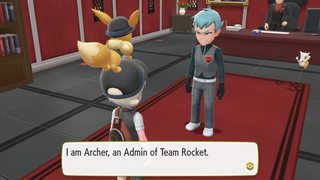 I finished the Team Rocket hideout in Celadon City. I fought Rocket Admin Archer before Giovanni, I wasn’t sure if this was newly added in Let’s Go or if Yellow had this admin battle as well. Apparently Archer wasn’t in Yellow, but has appeared in several Pokémon games in the past, starting with Gen 2, but he’s just “Rocket Executive” in those games. It’s in the Heart Gold and Soul Silver remakes that he was first known as Archer.

Anyway, I got the Silph Scope after beating Archer and Giovanni, allowing me to take on the Pokémon Tower in Lavender Town. Pokémon Tower was kind of a grind, to be honest. Lots of trainers inside, but they all had either Ghastly or Haunter so the battles were all nearly the same. I just sent out my Mr. Mime and he used Confusion, Psybeam, or Psychic to one hit KO them. Rinse and repeat until I reach the top and rescue Mr. Fuji from Jessie and James, who of course have Poison type Pokémon that Mr. Mime can hit with Psychic to kill thanks to his high speed and special attack.

Afterward I returned to Celadon City. After making my way through the trainers in her gym, I challenged and defeated Erika to get the Rainbow Badge. I thought her team in Gen 1 had more than 3 Pokémon, but I looked her up on Bulbapedia and I guess I was wrong! In Gen 1 she has a team of 3, and I guess in Pokémon Yellow she doesn’t even have a Vileplume, which is what I think of as her signature Pokémon. So I’m glad they adjusted her team in Let’s Go to include Vileplume. 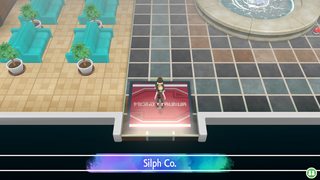 Then, it was on to Saffron City to free Silph Co. from Team Rocket’s clutches. This was an exercise in patience for me and a painful reminder of why we owned the strategy guide for Gen 1 back in the days of Red and Blue version. I got lost looking for the right teleporter for so long. I had to mute the music because I’d heard the loop way too many times and it was driving me up the wall! It’s not like I had trouble finding the Card Key, I got that without too much trouble. But, once I had it and could open all the locked metal doors, I got them all opened but then couldn’t find the right teleporter to get me to the only path to floor 11! Eventually, I walked into a teleporter that was in plain sight on floor 3 the whole time…and it was the right one. Ahhhhh! I could have sworn I’d tried that one before!!

Anyway, in the original games you fight your rival on the way to 11F, but instead here we actually fight Blue and it’s on the first floor before you start anything else at Silph Co.. I’ll take fighting the real Gen 1 rival over Let’s Go’s friendly rival any day! Then of course on floor 11 you fight Jessie and James and again, and Giovanni afterward. Beating him causes Team Rocket to withdraw from Silph Co., and gets you the Master Ball as a token of thanks from the president.

Usually at this point I remember challenging Sabrina at Saffron City’s gym right away. However, based on the layout of the badges on the Save screen, its designed for you to challenge Koga at Fuchsia City’s gym first. Also, the guy at the entrance to Saffron City’s gym won’t let you in unless you show him a Pokémon that’s at least level 45. I didn’t have one then, so I made my way to Fuchsia City and took on Koga. His gym was cool as always, filled with smoke invisible walls. My framerate seemed to take a little hit here, probably due to all the smoke. I took the master ninja down with a combination of Mr. Mime (who actually fared very poorly due to his 2nd Fairy type) and Onix. The Soul Badge is mine! 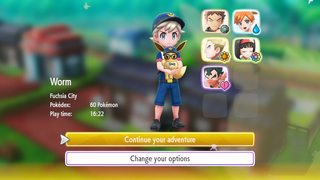 This is where I’m currently at. Despite the struggles I had with Silph Co., I’m still enjoying Let’s Go Eevee quite a bit, the nostalgia for Gen 1 still runs very strong in my heart. I still don’t have any level 45 Pokémon, but if I explore some more routes, fighting trainers and catching wild Pokémon, my Pokémon should reach level 45 in no time.