There’s a killer on the loose. A killer who removes their victim’s left eye while they’re still alive. Detective Kaname Date with the MPD, ABIS division, is assigned to the case due to his connection to the first victim. With the help of his AI companion, Aiba, he desperately tries to catch the killer before they kill again. This is the story of the New Cyclops Killings.

AI: The Somnium Files is a 2019 adventure game developed by Spike Chunsoft and released for PC, PS4, Switch, and Xbox One. The director and lead writer, Kotaro Uchikoshi, also wrote for the Zero Escape series, and there’s definitely a similar style and a few similar themes in this game. The flow of the story is also a little like the Zero Escape series, with a flowchart where you can can review where you are now in the story, see where it branches into several different routes, and restart from a previous point.

Gameplay is primarily a visual novel with some point-and-click sections, and the Psync segments which we’ll get into later. You play as Date, and see most of the game in first-person from his perspective. You can look around during these segments, but you can’t move around the area. During these parts, you look for clues and talk to people, with the occasional third-person cutscene for the more action-packed parts. Some of these even have simple quick-time events. The characters you’ll meet during the course of your investigation are an interesting bunch, but Date and Aiba themselves are just as interesting, if not more so. Date has a memory disorder and doesn’t remember anything past six years ago. He also lost his eye in an accident around that same time. Aiba was given to him by ABIS five years ago to be his AI companion, and her body is an eyeball - which is convenient, since it means she can replace Date’s missing eye. She and Date are linked via an artificial nerve while she’s in his eye socket, allowing him to communicate with her just by thinking. Aiba can also augment his vision, zooming in, and providing night, thermal, or X-ray vision. All this advanced technology make Aiba something of a state secret, so Date isn’t allowed to reveal her existence to anyone.

The story here is fantastic. It’s many things at many different times: it’s funny, it’s suspenseful, it’s mysterious. The brand of humor here might not be for everyone. Some of the jokes are pretty sleazy, but it also relies a lot on what I’d describe as “goofy” jokes, and sometimes it just gets so absurd that you can’t help but smile. Depending on your actions at several points, you’ll end up on one of several different routes to the game’s several endings. Each route gives you new details and background information, and as you play more routes these details slowly start to come together for the player. The overall mystery and the details of each route are interesting in their own right, but the payoff at the end of the final few routes is just incredible. I had pieced together some bits of the plot earlier, but I didn’t know how they were possible, and there were still some twists that I hadn’t anticipated. The way everything comes together at the end is extremely satisfying. When you reach the ending of the first few routes, you’ll have no idea what’s going on, so it’s amazing how other routes add context bit by bit until finally you look back and know exactly what really happened. 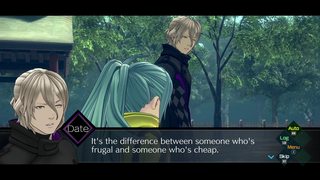 There were times when I wasn’t playing that I found myself wondering what would happen next, and if there were any clues in anything I’d learned. There’s a character Date calls “Boss,” she’s his boss at ABIS, and he’s called her Boss for so long he doesn’t remember her real name. So, one time when I was somewhere in the middle of the game, I was heading home from a McDonald’s run, and I suddenly remembered that you learn Boss’s real name in one of the routes, and I couldn’t stop wondering if that would be important (it wasn’t), but I also couldn’t remember her name! I think it just goes to show how well AI: The Somnium Files crafts its world and story that I couldn’t stop wondering about random details within it as I went about my everyday life.

In addition to creating Aiba, ABIS also developed the Psync Machine, a device that allows one person, called the Psyncer, to delve into another person’s mind and explore their memories in a surreal dream world called a Somnium. As the name of the machine might suggest, this process is called Psyncing, spelled with a “P.” Psyncing is crucial to Date’s investigation of the New Cyclops Killer, as it allows him to learn secrets and find leads that the suspects may be unable or unwilling to reveal otherwise. The branches in the story always occur during Psyncs, and most of them have two different outcomes depending on your decisions.

During a Psync, you explore the subject’s Somnium in third-person by controlling Aiba. This is the only time during gameplay where you can move around the environment. The goal of the Psync is to make it past several Mental Locks by exploring the Somnium and interacting with objects around it correctly. The way forward isn’t obvious a lot of the time, there’s definitely a lot of trial and error involved. There’s also a 6 minute time limit, and while time stands still when you’re not moving to give you time to think, every action you take when interacting with an object in the Somnium costs time, sometimes a lot of time. This is where Timies come in. These are expendable resources you can use to reduce the cost of an action. Some actions in the Somnium give you a Timie, and using them carefully is key to making it through Somniums. If you use Timies carefully, you can clear some Somniums on your first try even if you lose a bunch of time trying to figure out the solution, and sometimes you might clear them with just seconds to spare. Even if you mess up and run out of time though, you’ll be able to retry from the last Mental Lock. But you only get 3 retries per Somnium attempt, and if you use all of those you have to start over from the beginning. Luckily, you can fast forward through dialogue and cutscenes, so if you do end up having to replay one of them it’s really not bad. The designs of the Somniums and the actions you can take within them are interesting, some of them were pretty surreal. The Somnium gameplay itself was fun enough, it adds a light puzzle element to the gameplay. There’s one big drawback to Somniums that’s specific to the PC port, but more on that later.

Listening to this game was wonderful for two reasons. First of all, it has a great soundtrack composed by Keisuke Ito. I’m not too familiar with his other work, but as the lead composer on The Somnium Files he’s crafted a great soundtrack. My favorite was probably the music that plays when you’re in the interrogation room trying to get answers out of someone. The English voice cast for the game is also full of some great, familiar voices. My favorite was Erika Harlacher-Stone as the voice of Aiba. She also voices Ann in Persona 5 and Kyoko in Danganronpa, and I’d say her voice for Aiba is somewhere in between those two characters.

Now it’s time to address the worst part about this game, specifically its PC port: it tends to crash. This is usually during a Psync when you’re exploring a Somnium, but I also had it crash when I was in the options menu once. The crashes are a common problem on PC, with hit-or-miss solutions available. For instance, after the first crash I read up on the Steam community page and people recommended disabling Vsync in the game’s settings, which confusingly actually turns on the game’s built-in 60 FPS cap, which supposedly makes it more stable. I also turned the graphics settings down to Normal instead of Fantastic at that point, and for a while it was fine and ran without crashing. But once I got to the next Somnium, it crashed again. Following more advice from the Steam community, I updated my graphics drivers and was able to make it past that Somnium, but it was far from the last crash I’d experience. After repeated crashes in a particularly troublesome Somnium, I finally tried turning Vsync on using Nvidia Control Panel, and turned the game’s graphics quality down to Low, and that might have fixed things because I didn’t get any crashes afterward. I didn’t feel very confident in its stability given the number of crashes I’d experienced in Somnium up to that point though, so I continued to save frequently during these sections as I’d been doing since about the second crash. It’s disappointing that these crashes were never fixed by a patch for the PC port or something, but it speaks to the quality of the game’s story that I and so many others were willing to struggle through these crashes on PC. The game has a Very Positive review score on Steam! Given its positive review score on Steam, you probably wouldn’t expect it to have technical issues like this, but here we are. The last thing I’ll say on this is that it’s definitely a game worth playing, but you may want avoid the PC version and play it on another platform if that’s an option for you.

AI: The Somnium Files is a great game, despite its issues on PC. Its story is definitely worth experiencing, and the music and voice acting are also highlights. I highly recommend it if you enjoyed the Zero Escape series or if you enjoy visual novels. My final time was 22 hours 31 minutes.