I spent some time this week doing some of the Joker DLC Spirit challenges. These spirits are of characters from Persona 5, like Ann and Makoto. I still have a number to collect, as some of them are quite challenging!

I’ve also done Classic Mode as Donkey Kong, Pikachu, did really really poorly as Fox, and did surprisingly well as Yoshi. They were the first step in completing Classic Mode as all the characters. A lofty goal, to be sure, but one that I’ll continue making tiny steps toward. My first milestone will be beating Classic Mode as every character on the original N64 roster. Now I only have to complete Classic Mode with Jigglypuff, Ness, and Captain Falcon to finish off the N64 roster!

Other than that, my time playing Smash has been filled with Spectating some online matches. PatronusLight and I enjoy watching them, you do see a variety of skill levels among the random players which is pretty interesting. I’ve tried my hand at playing online too, largely as Joker, and I’m not the only one. We’ve seen a lot of Jokers playing online. Like, a lot of them. Especially early in the week. As the week went on, the level of Jokers seemed to decline though.

PatronusLight and I looked at some of the stages people are creating in Stage Builder and sharing. Memes, memes everywhere! Lots of the most popular ones are humorous joke stages. Like one featuring Hank Hill from King of the Hill or another with the Principal Skinner Steamed Hams joke. One cool one that I downloaded but haven’t played on yet was a recreation of the N64 Smash Sector Z stage.

Chapter 21 was a lot of fun. You’re tasked with having all your selected units escape, while the map is full of monsters and more reinforcements come just about every turn. There’s also a few Stoneborn on the map, which is the first I’d seen of them in the game, though they do feature in the CG opening. The map would be very difficult without the Dragon Veins that are spread around. The power these unleash on the map is freezing the movement of all enemies for 1 turn. By moving from Dragon Vein to Dragon Vein each turn, I was able to make it through the map easily, and even took down a few monsters for fun along the way. At the end, my Paladin Silas just wasted so many of the Faceless. He would get two attacks due to his speed, and his first hit was taking around half the enemies’ health, and he kept getting critical hits for the second. It was pretty awesome! 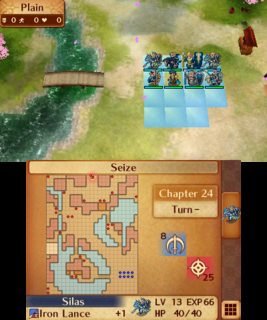 The subsequent chapters gave me some trouble…In Chapter 22, I lost Camilla, Beruka, Azura, and the avatar’s daughter Kana. Not wanting to restart, but knowing I probably should to avoid losing so many fighters, I saved in a new file so I could go back and replay from Chapter 22 if I had to. Well, in Chapter 23 I also lost some units. So, by the time I reached Chapter 24 on this save, I had only 8 useful fighters left - the other 4 I did have were so underleveled that they were worthless at this point. I decided to go back to my Chapter 22 save!

Replaying Chapter 22, after a few restarts I was able to make it through without losing any characters. Unfortunately, no matter how many times I tried Chapter 23 after it, I kept losing someone. The last time I tried it, I was doing pretty well, but then I lost Silas! I considered restarting again, but victory was so close I could see it, so I kept going and was able to win without losing anyone else. Losing Silas was a heavy blow, but I had Xander to fill the Paladin role anyway. 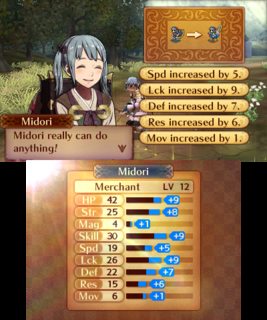 I had a little trouble with Chapters 24 and 25, had to restart a few times. In the end, I made it through losing only Elise, I think. In the meantime, I got 2 more pairs of characters up to S rank, which means I got to add their children to my army after doing some Paralogue missions! As in Awakening, getting 2 characters to S rank unlocks their child as a character. These new child characters I got are pretty useful too, one is a Merchant, Midori, who can use bows and lances, and the other is a Great Knight, Ignatius. I also have a child character I got earlier, Sophie, the daughter of Silas (may he rest in peace). I promoted her to a Great Knight as well, and she is a pretty great unit!

Now I’m at the beginning of Chapter 26. I haven’t attempted it yet, but I assume it’ll provide a challenge and lead me to restart several times. I’m pretty sure I’m in the last stretch of the game though, and I’m looking forward to seeing the end! What a journey it’s been!