Jeanne d’Arc is a strategy RPG (SRPG) developed by Level-5 for the PSP. It released in North America on August 21, 2007. Despite being Level-5’s first game developed for the PSP, and their first (and only) strategy game, it released to favorable reviews and strong sales.

I’m used to SRPGs like Fire Emblem and Final Fantasy Tactics Advance. I found Jeanne d’Arc held up very well among this group.

The Hundred Years’ War, with demons 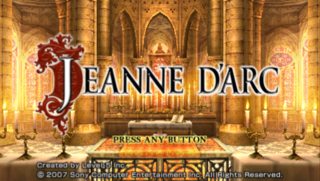 The story of Jeanne d’Arc deftly weaves in bits of actual history with fantastic and magical elements. With Joan of Arc’s involvement in The Hundred Years’ War as the basis, the story follows young Jeanne, a peasant girl from the small village of Domrémy during the ongoing war. One night, Jeanne finds a magical armlet in the forest. After it attaches itself to her wrist, she begins hearing a voice telling her to fight to save France, and the armlet gives her the power to transform into a powerful warrior. Immediately afterward, the English and their monster minions attack and burn her village to the ground. Driven onward by the voice in her head, and wanting to protect her friends and country, Jeanne leaves the ruined Domrémy with her friends Roger and Liane to fight alongside the French army.

This marks the beginning of her journey to save France from the English and the demons they’ve allied with. A journey wrought with struggle and loss, but also with a delightful cast of characters who join to fight at Jeanne’s side. One of these, La Hire, the lion-like therion, is based on the historical figure of the same name. The La Hire in reality is also said to have been a close ally of Joan of Arc. It’s little historical touches like this that give the story of Jeanne d’Arc an extra dimension that I haven’t seen very often, at least not this recognizably.

The game uses Anime cutscenes to portray key story moments throughout. Considering the small resolution of the PSP, these look wonderful. There are some dodgy frames of animation here and there, where maybe a character’s face is misshapen, but overall the quality is excellent. If a Jeanne d’Arc anime adaptation was ever released, I would watch it immediately. 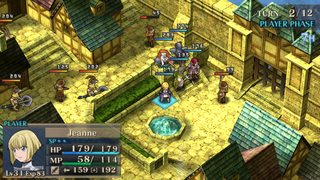 Like other games in its genre, the primary gameplay element in Jeanne d’Arc is strategic combat. Each stage has a victory condition and a failure condition. Every stage also has a turn limit, so you can’t waste too many turns. The turn limit was only an issue in a few stages though, in general it was generous enough not to feel restrictive, and kept me focused on the goal.

Through battle, your units gain experience and level up to become stronger. You also need to manage their equipment by buying new weapons and armor from shops throughout the game. This is pretty typical SRPG fare, but where Jeanne d’Arc primarily innovates is with the Burning Aura and Transformation systems.

Burning Auras form when you land a regular attack on an enemy. The Burning Aura forms on the opposite side of the enemy. If you place a character inside a Burning Aura, their attacks will do more damage, providing incentive to surround enemies. In my experience, Burning Aura made a huge difference against some bosses, and throughout the entire game it felt like a very natural and well thought out system.

The Transformation action available to some characters likewise revolutionizes the strategic opportunities available to the player. Certain characters, like Jeanne, can Transform once they’ve accrued enough SP. They gain 1 SP per turn, and using the Transform ability takes 3 or 4 SP. Once transformed, the characters become more powerful than when in their base forms, and gain access to powerful skills unique to their transformed state. Throughout the game, you will get additional gem stones for the armlet, which allow you to take on more forms and use Transform more than once per stage.

I also found the Godspeed mechanic while transformed very useful at times. If a transformed character defeats an enemy, they get to act again. If you’re able to defeat another enemy in this time, the character again gets another move, and the cycle continues. This opens the door for a lot of potential strategies when facing many enemies at a time, and can turn the tide in a pinch!

Of course, there are some problems Godspeed can’t solve, and one of those is boss battles.

The struggle is real, sometimes

The biggest fault I found with Jeanne d’Arc is that it occasionally throws a really tough difficulty spike at you. One minutes you’re breezing through missions without any problems, when a tricky stage or a seemingly god-like boss stops you in your tracks.

These difficulty spikes were the biggest struggle. Most of them seemed like a fair enough challenge, and I was willing to lose a few times. At two points in the second half of the game, there were incredibly difficult boss battles, and I nearly lost motivation to complete the game.

Both times, however, I just looked up threads on GameFAQs to find suggestions on how to best tackle those obstacles. Each time, a number of people didn’t run into the problems I did at all, which surprised me! The reason behind this boils down to one thing: you can grind experience and levels freely before proceeding to the next main story stage.

In SRPGs where grinding is possible, it often seems that an easy solution to a difficult level, or even to a difficult game, is to just grind and increase the levels of your units. This is definitely true for Jeanne d’Arc, and since I did very little grinding in my playthrough, it may explain why I had such a hard time on a few occasions.

Aside from the difficulty spikes, I can find very little fault with anything in the game. Everything works and plays well. There are some features that would have been nice to have, like the ability to speed up or skip battle animations, or the ability to see the full attack range of the enemy. 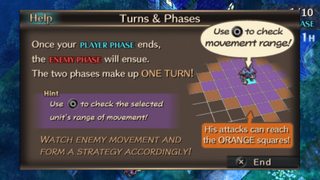 For the latter, Jeanne d’Arc does allow you to see an individual enemy’s movement and direct attack range, however it does not show you the attack range of any special skills they might have. So an enemy who has a powerful magic spell might not look like they can hit you based on their movement range, but they might still be able to throw a spell your way. You also can’t turn on movement/attack range visibility while planning your own moves, or for more than one enemy at a time. Fire Emblem has all these nice features, so maybe I’m just spoiled from playing those. On the other hand, Jeanne d’Arc probably doesn’t need those attack and movement range features since unit death isn’t permanent as it is in Fire Emblem.

There are a number of fun mechanics in Jeanne d’Arc I didn’t even cover in this review. It’s not that I skipped over them because they’re bad features, far from it. Things like Skill Gems, Skill Binding, Skill Affinities, and Unified Guard. These features too make Jeanne d’Arc a great game, and Skills in particular allow for lots of great customization and freedom. Other RPGs or SRPGs have similar features though, and I only wanted to cover the unique aspects of Jeanne d’Arc in depth.

In the end, my recommendation on Jeanne d’Arc is this: for fans of SRPGs, if you are able to play it you absolutely should! I also think that it would be a decent entry to the SRPG genre, thanks to the early game tutorials that explain many concepts well, but should a new player run into difficulty spikes (which they may not, depending on their playstyle) they may be discouraged.