The King of All Cosmos has gone a little overboard. He destroyed all the stars, and the moon. It was the alcohol’s fault, really. Anyway, His Excellency can’t be bothered to replace them all, so as The Prince, it’s your job to scrounge up things to rebuild the stars and moon with. It’s a big job, you’d better get started. 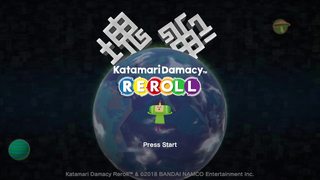 Like I mentioned in the intro, you play as The Prince, the 5cm tall child of The King of All Cosmos. In each of the game’s levels, you have to roll around a katamari, a magical ball that causes anything smaller than it to stick to it, making the ball you roll around bigger and bigger. That’s where the puzzle element comes in, because you have to roll around the levels finding things small enough for you to roll up, causing the katamari to grow and let you roll up larger things.

You have a time limit for each level (well, there’s one level that isn’t timed but that’s not relevant here), and your goal in most levels is to get the katamari to at least a certain size within the time limit. Once it reaches that size, you can keep rolling around until the time is up though. It’s fun to see how big you can get the katamari in each level, and I replayed a few levels to see if I could beat my previous high score.

The levels all take place in the same world, but there are always different objects around to roll up, which make the levels feel different even if you’re rolling around the same location each time. The starting size of the katamari also varies, sometimes you’ll start out with a katamari barely bigger than a thumbtack and you’ll be rolling around a house, whereas some levels start you out with a much larger one and you’ll be rolling around city streets. There’s a lot of detail in the levels too, I didn’t even realize they all took place in the same town until closer to the end of the game, when I began to recognize certain landmarks.

When I played Donut County a little while back, I’d heard that it had similar gameplay to the Katamari series. I definitely see the resemblance. Both have a similarly joyful gameplay loop. Rolling things up into the katamari is just pure fun. Even when you get the point where you’re rolling up people into the katamari, which is sort of a horrifying concept, the game maintains this happy, upbeat vibe. It helps that the graphics aren’t realistic, and are instead heavily stylized. The cheerful music also contributes heavily towards the happy, energetic feeling, and it will get stuck in your head, by the way. It’s so catchy, I found myself whistling some of the melodies when I wasn’t playing for days after finishing the game.

Katamari Damacy is a bizarre game. The premise is weird, both the story and the gameplay. But it’s so much fun, and it works so well. It was the first game in the series, and I’m definitely going to have to try more games in the series at some point. This game is the only one on modern platforms at the moment, but maybe other games in the series will see a remaster someday. My final time for this one was 4 hours 23 minutes, and I enjoyed every minute.