There’s a time loop on an island called Blackreef. Every day, the inhabitants wake up and go about their day. At midnight, time resets, and the same day begins again, but no one on the island remembers it. Well, there are two people who keep their memories across the loops: Colt Vahn, and Julianna Blake. Colt is determined to break the loop and end the repeating day forever, while Julianna doesn’t want the loop to end, and spends the day hunting and killing Colt to stop him. But death on Blackreef is only temporary. Even if Colt dies during the day, he wakes up alive in the morning, ready to start the day again and try to, in his words, “break this fucking loop!”

Deathloop released in 2021 for PC and PS5, and it’s the PS5 version that I played. It was developed by Arkane Studios, who also developed the Dishonored series, and it feels a lot like a Dishonored game in many ways. The mechanics and level design allow for the same “play your way” philosophy, with many paths through levels, and many different approaches you can take. You can sneak around, taking out enemies silently, or maybe you just go in guns blazing. I definitely prefer the slow, stealthy approach, but that’s mostly because I’m not very good at the latter. You also get supernatural powers just like in Dishonored, but more on those later.

Right off the bat, the biggest difference between Dishonored and Deathloop is in how they handle progression. Dishonored is strictly mission based and linear, whereas Deathloop is more open-ended. Your goal overall is simple: assassinate all 8 Visionaries on Blackreef in a single loop. Getting to that point takes a lot of investigation and exploring though. The time loop is split into 4 different time periods: morning, noon, afternoon, and evening. You can visit one area per time period, and there are 4 different areas available. Depending on the time of day you visit an area, the level changes a bit. Certain parts get closed off, and others open up depending on the time of day. There also might be more enemies at different times of day, and enemies might be in different locations. So while there are technically only 4 different “levels” in Deathloop, each of them is big, and visiting at different times introduces enough variety that revisiting the levels never felt stale.

There’s no time limit on how long you can spend in an area either. The day doesn’t advance to the next time period until you leave. You could visit an area in the morning and spend 10 minutes there or an hour there, and it will stay morning until you leave. Once you leave, it becomes noon, and you decide where you want to head next. You can just wait until the next time period if you want, and not visit any area. Waiting might be nice if you’re following a specific lead and want to focus on it, or just don’t have anything else to do at the current time. I didn’t use the waiting mechanic very much, there was always something for me to do in at least 1 area at any given time.

The tutorial to Deathloop is linear, guiding you through how the 4 time periods and 4 areas work, but once you’re through the tutorial, it’s up to you to decide what you want to do and when, and figuring out how you can possible assassinate all 8 targets in a single loop. They don’t make this easy. Each morning, Julianna warns the Visionaries that Colt is out to get them, so they and their henchmen will shoot on sight. Also, the Visionaries aren’t supposed to group together in order to make it harder for Colt. You need to figure out their schedules, and figure out ways to assassinate multiple Visionaries in a single time period. For example, visiting The Complex during the morning and sabotaging some equipment there will disrupt Egor’s experiment, causing him to spend his evening at Updaam instead of The Complex, giving you a chance to assassinate both Egor and Alexis at the same time. Discoveries like this area tracked via Leads, and you can pick whichever Lead you want to highlight in order to get objective markers for it, and have the area you need to visit highlighted for you when planning your next move.

I really enjoyed the freedom this system gives you. You have several different Leads you can pursue at any given time, and it was fun becoming familiar with each area at each time of day, and figuring how to best assassinate each target. Ultimately, there’s only one way through the day that lets you assassinate all 8 Visionaries in one loop, but figuring out everything necessary to get to that point was a lot of fun, and executing the plan in the end was really satisfying.

This system leads to a lot of variety in the early game too. When you start out, you only have a basic gun and Colt’s Reprise Slab. Slabs are the items that give Colt and the Visionaries their supernatural powers, and Colt’s gives him 2 extra lives basically. In each time period, Colt can die twice without resetting to the beginning of the loop thanks to Reprise. Dying and consuming a Reprise use respawns Colt back to where he was shortly before he died, giving you another chance at whatever lead you’re currently following. Early on, before I had a lot of equipment stocked up, I used these a lot, and sometimes even the Reprise lives weren’t enough, and my Colt died for real, resetting to the beginning of the loop. This was a little frustrating honestly, but since Colt keeps his memories between loops, you can still make progress even if you die, since you might learn an important password or other information that will advance a lead, and even if Colt doesn’t make it out of the area alive, you can take this information into the next loop with you.

Thanks to the Infusion system, I died a lot less the farther I got into the game. Normally when the loop resets, Colt loses any guns and equipment you picked up during the previous loop. But by absorbing Residuum energy from glowing objects around the maps, you can spend it between levels to Infuse your equipment, which lets you keep things between loops. This is incredibly helpful, and allows you to start the day with a better and better loadout.

In all the Dishonored I’ve played in the past, I relied heavily on the Blink ability, which lets you teleport short distances. Deathloop features the same power, called Shift here, but unlike in Dishonored, you don’t start with it. You have to get around the old fashioned way in the beginning, walking, jumping, and climbing everywhere. My Blink addiction made that difficult for me, so the first thing I did after the tutorial was trying to get and Infuse the Shift slab. Shift is in the hands of Charlie Montague, one of your assassination targets, and getting to him without the teleportation ability was a struggle. Since he has the Shift slab, he can teleport around if he sees you coming, and I definitely alerted him the first time I went to assassinate him. He was hard to hit since he was always teleporting around, but eventually he got stuck on something long enough for me land enough shots to take him down, and the Shift slab was mine. 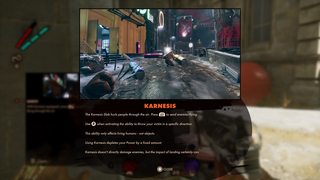 Other than Colt’s Reprise slab, which is equipped permanently, you can equip up to two other Slabs. Once I got Shift, I had it equipped to 1 of those slots for the rest of the game, which left me one power slot to experiment with. The other available Slabs are held by a few other Visionaries, and there’s some fun things to play around with. Nexus allows you to link enemies in a small area and cause them all to die when you kill one of them. Emily in Dishonored 2 had a very similar power called Domino, but I don’t think I used it much there. I played around with Nexus a bit, but the power I ended up using most of the time in my last slot was Karnesis. Karnesis lets you throw enemies around telekinetically, and you can control the direction they get sent with the right stick. Using Karnesis to throw enemies off cliffs, into walls, or even just throwing them to the ground to stop them from shooting me for a bit was super useful. Aside from Shift, it was definitely my favorite power in the game.

Another big way Deathloop differs from the Dishonored series is with its greater emphasis on gunplay. A large part of that is due to the difference in setting. Dishonored is set in a fictional, Victorian-era world, whereas Deathloop is set in the 1960’s, so it makes sense that there are a lot more guns around than the flintlock pistols of Dishonored. There are 8 different kinds of guns to find, plus a few extra unique weapons you can find in a few side quests. The weapon drops you find, like all item drops in Deathloop, have varying levels of rarity. It does the color-coded rarity thing that a lot of games do nowadays, where the colors indicate the rarity tier. Purple weapons are the best tier, and have added permanent bonuses, like being quieter, or dealing more damage against tagged enemies. You can also further customize your weapons by equipping weapon trinkets to their open slots, and higher rarity weapons have more slots available.

Until now, I’ve been talking about the “Break the Loop” mode where you play as Colt, but there’s actually a second game mode, “Protect the Loop,” where you play as Julianna. See, “Break the Loop” actually has an online multiplayer component: another player can invade your game and control Julianna as she hunts you down. When you play “Protect the Loop,” this is what you do. You control a Julianna and try to kill someone playing as Colt as they go about their business trying to follow a Lead. I wasn’t able to play any of this actually, since I don’t have the paid online subscription for PS5, PlayStation Plus. It sounds like an interesting idea, but I missed out on it entirely. Even playing offline as Colt though, an AI-controlled Julianna will sometimes appear to hunt you down, but I imagine having Julianna controlled by another player would be very different.

Deathloop takes the Dishonored formula, evolves it in some interesting and fun ways, and adds more guns. I had a blast playing it, and if you’re a fan of the Dishonored series, I definitely recommend giving it a shot. My final time was around 15 hours, but I think I’ll definitely be playing some more at some point to try out different playstyles and character builds. Similarly to Dishonored, it has “Clean Hands” achievements for completing assassinations without killing anyone besides your targets. I always enjoyed going for those in Dishonored, and I think I’ll do the same here eventually.

I finished Murder by Numbers this week. Continue reading