One area I unlocked recently in Jeanne d’Arc is The Colosseum, which sort of exists as an optional area where you can fight to level up your characters pretty easily. It also seems to parody the old TV show Deal or No Deal, as you are asked before each fight if you want to Yield or No Yield.

I used the Colosseum to get Rufus, the Scooby-Doo dog man, up to a suitable level to use in combat. I had been using the lion man La Hire, but after doing some brief research online and after talking about the game with a co-worker who played it as a kid, it became clear that Rufus’s stat growths make him a better character overall. So far, he hasn’t let me down now that he’s gained a few levels! He can deal some pretty heavy damage with just his regular attacks.

Aside from that, I didn’t accomplish much in Jeanne d’Arc this week. I ran into a tough mission in which you need to escort an AI controlled unit, the dauphin, to the opposite end of the map. The trouble I’ve run into is that the dauphin will run forward at the beginning of each turn, and all I can really do is try to keep up and keep the enemies at bay. However, there are enemy archers on the map that have picked the dauphin off time after time, since they can just fire right over the units I’m surrounding him with. I’ve gotten so close to completing the stage, only for an archer to wipe out the dauphin with a single attack.

So, I’m still working out how I’m going to overcome this challenge. It does feel a bit tedious at this point, but I welcome the challenge, and I feel like I’m just missing a bit of strategy. Maybe I’m forgetting an earlier tutorial and there’s a way to direct what the dauphin will do on my turn, because that would make the level so much easier if I could just stop him from rushing forward!

Just a few random adventures of Kayleigh Covarrubias this week!

First off, Kayleigh finally achieved her Master Vampire Aspiration, and after doing so she had enough power points to get the Supernatural Speed and Perfect Sun Resistance Vampire Powers, which means she can run super fast now!

She’s also completely immune to the sun! A true Daywalker. Also, it might not look like it from the GIF, but the Supernatural Speed is actually really, really fast in-game. It’s super nice. Demario got it a long time ago, but Kayleigh hadn’t, so I forgot how convenient it is for your Sims to get from point A to point B super fast. 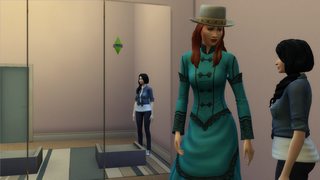 While getting into costume for a recent acting gig, I was also reminded that Vampires in the Sims 4 don’t have reflections in mirrors. This is so cool, I love this little detail! The gig itself didn’t go well though, since my game decided to glitch out for some reason and Kayleigh and everyone else on the lot just stood still whenever I tried to get her to act out the scenes…so frustrating! I ended up quitting the gig early and I probably won’t join Kayleigh at future gigs, at least for a while.

To end my Sims tales for the week, please enjoy this picture of Kayleigh suffering from the burdens of fame as everyone copies her outfit