So when I said last week that I was going to call my post-game adventures “Complete” in Ultra Moon…well, that was just a Fake Out, I guess! I’m still playing this a bit! Just wandering around Alola exploring, I seem to be finding all kinds of little post-game activities.

I revisited Iki Village and talked to Hala, and we battled once more! I wiped the floor with him. My reward for this victory: Z Crystals for the starter Pokémon I didn’t pick.

Oh, also, remember those 55 Big Nuggets that are the reward for completing Episode Rainbow Rocket? Well, 55 Big Nuggets sell for a lot! I have more money now that I know what to do with. That’s the kind of thing that feels like a fitting post-game reward: more money than I’d ever seen before in-game.

In continuing my Tapu hunt, I went to visit the shrine on the first island. Before I made it to the shrine, I ran into Lillie and Nebby. Deciding to entrust Nebby (now Lunala) to me, Lillie requested I battle Lunala and capture it in a Poké Ball. Thus, the battle with Lunala began!

I paralyzed it quickly with my Manetric, then switched in my Aegislash who knows False Swipe, wanting to bring its HP down to 1. Well, that plan was quickly foiled when I realized Lunala is Psychic-Ghost type and False Swipe has no effect. I didn’t want to risk killing it, so I didn’t attack it too much and just threw Ultra Balls at it at near full health. A few Ultra Balls later, it was mine! Not a very difficult catch after all.

With Lunala captured and sent to a PC box, I could continue on to face the Pokémon I was there for: Tapu Koko. Tapu Koko was a little tricky because I couldn’t paralyze it, I guess because it has an Electric type. I could still weaken it with False Swipe though, and I captured it in an Ultra Ball after several broke.

Then it was on to the final Tapu, Tapu Bulu. I used the usual tactic, paralyzed it and brought it down to 1 HP. Despite all this, it still broke through a surprising number of Ultra Balls before finally staying. It probably took around 8 Ultra Balls, I think. Nevertheless, in the end it was mine, which meant I had completed my Land Guardian Poké Dex page!

More Sims! I’ve been playing a little bit here and there in the past few weeks, The Sims is just a nice game to come back to again and again as I keep building upon the story and legacy of my Sims. 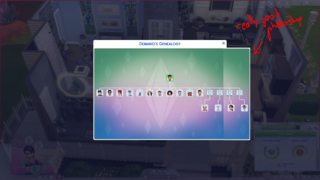 First off, we can see as a result of Demario’s deeds last week that his family tree is progressing nicely. He has so many descendants now that they don’t fit in the genealogy window all at once, so I had to bust out my advanced Photoshop skills to work some magic. I didn’t play as Demario this week though, I’ve returned to his vampiric granddaughter, Kayleigh.

Kayleigh spent some time looking for a new potential suitor to father another child. The first man didn’t work out, as he left her house before she had a chance to Try for Baby.

Never fear though, she found a new suitor shortly after, and after putting the moves on him at a local bar and Trying for Baby in the closet, Kayleigh became pregnant with her second son.

Once he was born I aged him up from a baby to a toddler immediately because I think the baby life stage in The Sims 4 is pointless. Kayleigh had no desire for motherhood as she stood holding him blank-faced, so I again moved the new child to live with his father. Kayleigh’s lineage is now well on its way! I don’t intend to give her any more children, but you never know. I am super glad Demario still shows up on in her genealogy window, even though her parents were erased from memory by my earlier MCCC blunder.

I’ve started playing this fine strategy RPG this week! Think Fire Emblem or Final Fantasy Tactics, but set during the Hundred Years’ War in an alternate reality with monsters and magic. It’s pretty awesome, and a whole lot of fun! It was developed by noted Japanese developer Level-5, who have put out a number of well received series including Professor Layton and Yo-Kai Watch. This will be the first Level-5 game I play, as far as I can remember. One thing to note about the screenshots this week, you’ll see varying resolutions and quality, since I switched from emulating on my phone, PSTV, and PC when capturing them. I’ve settled into emulating on the PC with a higher rendering resolution, and I think it looks quite nice!

In the world of Jeanne d’Arc, there was an ancient war between humans and demons in ages past. Humanity was able to defeat the demons and seal them away with the help of five Holy Armlets. Many years later, during the Hundred Years’ War, the English have allied themselves with demons, partnering with them to occupy France. It also seems the young king Henry VI is possessed by demons as well.

From the very beginning, I was impressed with the quality of the animated cutscenes. Considering the small resolution of the PSP the have to use, they look absolutely wonderful from what I’ve seen so far. They aid in telling the story of Jeanne, who finds a legendary Holy Armlet in the forest. The Holy Armlet attaches to her wrist, and gives her the strength to fight, allowing her to transform into a sort of Holy Warrior form. That same night, her village is attacked and destroyed by the English and their demon allies, and Jeanne begins her journey driven by anger, and begins hearing a voice in her head telling her to fight and save France.

My knowledge of the Hundred Years’ War is basically non-existent, but I’ve read many of the figures Jeanne meets are based on real people from history, such as Charles VII. The characters I’ve met so far have a lot of character. Colet has a very unique way of speaking, basically a stereotypical French accent but combined with Elmer Fudd’s difficulty with the letter “R.” He’s just one of the colorful and fun cast. There’s also the lion-man La Hire, who I guess is just a normal occurrence in this world because no one seems to react unusually to his appearance. 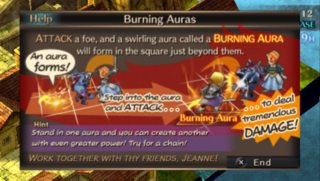 The in-game tutorials are also excellent, and look just as polished and excellent as the rest of the game. The tutorials are presented in slides. The one depicted here explains Burning Auras, a unique feature compared to the other strategy RPGs I’ve played. After you attack an enemy, the space opposite the side you attacked will be surrounded with a Burning Aura (unless it’s an impassible tile I think), and if you are able to position a unit in that tile and launch an attack, they will deal more damage. This can tip the scales in your favor hugely, if utilized frequently!

There are various weapon types as well, some of which have different attack ranges, like how lances reach two tiles. Likewise bows can reach several tiles including adjacent ones, but unlike other types of weapon users a bow-wielder cannot counter. 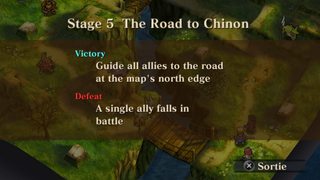 I also really like how the victory conditions of each mission have a bit of variety. So far I’ve encountered the usual “defeat all enemies to win” condition, or sometimes a “defeat boss” condition, but one mission’s victory condition was to get all allies to the exit. Failure conditions also vary between missions, which I think helps keep things interesting. Usually it’s “you fail if all your allies fall,” but sometimes you lose if Jeanne falls, or if anyone falls. I actually got a Game Over due to that last one, I was just a little too reckless with my units.

Another feature that plays into strategy hugely is Jeanne’s ability to Transform. Because she has the Holy Armlet, she can transform in battle into a super powered form. It takes a few turns initially to charge before transformation is available, but once transformed Jeanne deals more damage, gains access to a unique and powerful skill, and most importantly gets to take another turn every time she defeats an enemy. You can Transform once per Gem per battle, and so far I’ve collected two Gems for Jeanne’s Holy Armlet, so she can actually use Transform twice now!

There’s also a World Map system. Similarly to Final Fantasy Tactics Advance or some Fire Emblem titles, the World Map allows you to traverse your known locations on the map freely, stopping at previously unlocked locations to buy equipment, skills, or items where available. When you’re ready to advance the story, you simply head to the location of your objective. There’s a Free Battle system as well, where you can return to prior locations on the World Map to fight battles and gain extra experience or items.

The ability to equip different skills for your characters is nice too. Each character can have up to 3 equipped initially, though they gain more slots as they level up. Each skill has a prerequisite level required to equip it. You’re pretty free to customize your units with skills as you see fit. One use of the aforementioned skills is in giving a character a Spirit Affinity. The Spirit Affinities system seems sort of similar to Fire Emblem’s Weapons Triangle. Basically, there’s 3 affinities and each receives a bonus against 1 other affinity and a penalty against the other one. Skills are equipped to increase Spirit Affinities. It seems like a nice system that could make a difference in tense combat situations. Finally, as if all that weren’t enough, you also gain the ability to fuse certain skills together to form new ones relatively early on in the game, a feature they call Binding Skill Stones!

In summary, I’m loving Jeanne d’Arc so far. The story, characters, and gameplay are all absolutely wonderful, and I can’t wait to play more! I expected it to be good, but I didn’t know it would be this good!