Yesterday, following the conclusion of Persona 5 The Animation’s final TV special, Stars and Ours, which concluded the anime adaptation, Atlus released another teaser trailer about the P5R project, which has been revealed to be Persona 5 The Royal.

So far, that 45 second teaser is basically all the information Atlus has officially released on the subject. The end of the teaser promises more information on April 24th, but until then it’s likely they will remain silent on the subject. What are Persona 5 fans supposed to do until then? Launch into a fever of rampant speculation online, of course!

PatronusLight and I are extremely excited for any new Persona 5 content, so it’s amazing to see new teasers and announcements for P5R. Of course, basically nothing has been confirmed so far. We don’t know who the female seen in the trailer is, her relation to the Phantom Thieves, or even whether Persona 5 The Royal will be DLC or a whole new game release. One thing that has been confirmed is that it will be on the PlayStation 4, as confirmed by the Japanese P5R site with the large PS4 logo at the bottom of the page. We know that it includes a new female character, depicted in the trailer, and that she is a first year Shujin student from her uniform and the number on her jacket (assuming it is her uniform and not just some disguise).

I’ve read tons of theories online. Most are pure speculation, but some seem to have a bit of investigation behind them. For instance, one popular theory is that the girl in the trailer is a female player character, and P5R will give you the option to play as her instead of the male Joker. That seems plausible enough, given how Atlus has done something similar with Persona 3 Portable in the past, but what lends further weight to this is that Super Smash Bros. Ultimate dataminers have recently uncovered information that seems to indicate a female costume variant for Joker will exist in that game. If this new female character is an alternate costume for Joker in Smash, it would make sense that she’s a new female player character, right? Of course, Joker hasn’t been released for Smash Bros. just yet, so this should be taken with a grain of salt.

Male: What do you think of the Phantom Thieves?

Female: I think that helping people is a great thing. But, I don’t like the Phantom Thieves. I don’t think what they are doing actually helps people. In the end, people have to solve their problems on their own, I think. 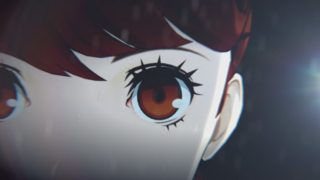 If the female voice belongs to this new red-haired ponytail girl, it hardly sounds like she’s a friend or supporter of the Phantom Thieves. However, she’s not seen speaking. We don’t know that the female voice-over belongs to her, although it does seem like that’s the intention since she’s on-screen during the majority of the voice-over. I’ve also seen it said that the male voice belongs to Akechi, but I am not familiar enough with his Japanese voice actor to know.

If you’re interested in reading more theories and discussion about them, and you have a Reddit account, you might head over the the r/Persona5 post on the Persona 5 The Royal announcement. I used that as a source for some of these theories, and it’s likely you’ll find theories there wildly more inventive than my own, but beware of P5 spoilers if you check it out! Although, I imagine most who are following the P5R news have already played P5.

As I’ve said throughout the article, we know basically nothing about P5R in reality! Atlus has strung us along teaser by teaser so far, and all we can do is speculate, and get hyped. I, for one, am very much hyped! Let’s hope when April 24th rolls around that we’re given a little more than just another teaser and another date to look forward to!

Oh man, I just realized we don’t even have a Japanese release date for P5R, I don’t even want to know how long I’ll have to wait for the English localization…!