Be warned, spoilers are contained within this week for Pokémon Ultra Moon! I spoil most of the Episode Rainbow Rocket post-game content, so read at your own risk!

My postgame adventure continues, I began the week by catching another of the island guardians, Tapu Lele.

This one I was much better prepared for than the last, or maybe I just got lucky, but it only took 2 or 3 Ultra Balls to catch it. It was paralyzed before I started throwing Ultra Balls, I’m guessing that helped quite a bit.

I went to the Game Freak offices in-game afterward, and challenged two of the in-game Game Freak employees. I beat them handily, but it was a fun battle. The double battles here always remind me of the limits of the 3DS though…the framerate really suffers when 4 Pokémon and 4 Trainers are all displayed at once. 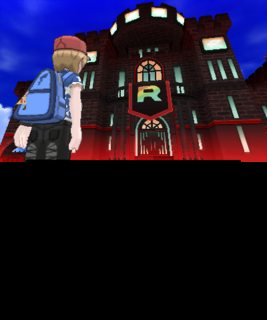 I finally decided it was time to begin Episode Rainbow Rocket, and played through all of Episode RR this week. The Rockets have made their castle where the mansion once stood on the grounds of Aether Paradise. To get to it, I had to fight a couple Rainbow Rocket Grunts. I have to say, it’s really cool to see the classic Team Rocket uniform again. I think it looks great in Ultra Moon.

The Grunts were easy to beat…but I also had to fight Aether Branch Chief Faba right before the castle. It was no surprise he was evil again. The battle was really close, his team nearly beat me. His Bruxish in particular was just destroying my team. In the end, we narrowly prevailed.

Once inside Team Rocket Castle, I was excited to see Guzma appear and team up with me to fight some Grunts in a double battle. Guzma wants to help rescue the Aether president, Lusamine, who has been spirited away somewhere by Team Rainbow Rocket. For whatever reason, Guzma is probably my favorite character in this game. His theme music is awesome. After schooling those two grunts, Guzma stands guard at the entrance, and I pressed onward exploring the castle.

The castle is pretty cool, there are a number of Grunts to fight, all of whom use classic Team Rocket Pokémon, like Persian, Muk, Tentacruel, Golbat, and Fearow.

There are also some neat puzzles, like a teleporter maze similar to the kind seen in the original Pokémon games.

There was also a cool Meowth Statue puzzle. You have to avoid walking in front of the Statues’ line of sight, and each statue can be turned to face a single different direction if you can get behind it. So those required a little puzzle solving to make it through, and were well designed in my opinion. It’s also not a type of puzzle I remember encountering in any other Pokémon game.

They also brought back the puzzles with the arrow tiles that send you spinning when you step on them. So, basically all the classic Team Rocket dungeon puzzles were here, which is really cool!

There were a couple surprises waiting for me in the castle too: the bosses from each prior Pokémon generation, each of whom uses a legendary Pokémon from their generation in battle. The backstory of these bosses in Episode RR is interesting as well, they’ve all been summoned from their parallel dimensions. What’s interesting is the dimension they each come from is one where they succeeded with whatever dastardly plan their Team had cooked up, and several make remarks when you beat them about how maybe things would have been different in their world if a trainer like you had existed.

You also battle representatives from X/Y, Black/White, and Diamond/Pearl, and having played each of those generations, seeing the old baddies return with the a signature legendary Pokémon of their generation was neat.

Of course, the final boss of Episode RR is the leader of Team Rainbow Rocket, none other than Giovanni himself. One thing I’m not clear on is if this is the original Giovanni from Red/Blue/Yellow, or some parallel dimension Giovanni. I really don’t know the chronological timeline of the Pokémon games, but I do know it exists.

Anyway, his team gave me some trouble, his Rhyperior took down several of my Pokémon, and likewise when he sent out Mewtwo and mega evolved it into Mega Mewtwo, he had me down to 2 Pokémon. Luckily I had some Max Revives! I managed to take him down, somehow.

Afterward, Aether Paradise goes back to normal, and your reward for saving the day is 55 Big Nuggets. Pretty cool! Of course everyone is unharmed after things settle down.

After the earlier fight, Giovanni mysteriously vanishes. We see him plotting future evil deeds in a cutscene before he vanishes into thin air again.

Then, that’s it. The end of Episode RR.

It was a fun bit of post-game content, and took me several hours to complete! I’m not sure what other post-game content awaits me in Ultra Moon now. Episode RR was the only thing I was aware of, so I kind of consider myself “done” with the post-game, but I’m probably wrong about that. I’ll probably keep Ultra Moon installed, and play it here and there, but I think this one is going in my “Completed” category on HowLongToBeat now.

I finally returned to Spider-Man to finish what I started! When I last left off, I knew I was close to the end of the game, but I had no idea how close. I started playing, started the next story mission…and realized it was the last one. I was done with the game within 30 minutes, but what a cool 30 minutes they were. Like many superhero movies, Spider-Man ends with a cool confrontation against the bad guy, Spider-Man struggles and faces a tough fight, but he prevails.

There was some cutscene after the final battle, several scenes played out. Honestly, the last scene felt a little rushed. Time jumps forward 3 months, Pete and MJ talk in the diner some more, and then it just cuts to the credits. So that felt a little weird, but in the end Pete and MJ are tentatively back together again I think, so I guess that’s good. I don’t really know what else I was expecting. Since I did spend so much time away from Spider-Man before finishing it, it could be that I’m forgetting earlier scenes where things were tied up and resolved, etc., I’m not really sure. Either way, I have officially finished the main story in Spider-Man.

It was a ton of fun. As a AAA game, it has a ton of production value. The story was a really good superhero-movie type story, this version of Peter Parker and Spider-Man were really well done and the voice actor for him was the great Yuri Lowenthal. Swinging around was also awesome, and the rest of the game was solid too. I probably won’t do a full review of the game, because it’s pretty obviously a good AAA, open world game. My biggest complaint remains the MJ/Miles missions, those were a drag. If you’ve played other AAA open worlds, you know what to expect with Spider-Man.

I will say that it is everything I wanted in a true Spider-Man 2 video game successor, which is honestly something I didn’t think I’d ever see.

With the mystery of StrangerVille solved, I’ve turned to playing as my original Sim on this save, Demario Covarrubias. Eternally a young adult, in the past he’d built up quite a family tree, with many children, grandchildren, and even great-grandchildren to his name. Then I messed all that up when I installed the powerful MCCC mod, which contains tons of features. I used one of these without thinking, and wound up removing a lot of sims from his family tree. The living Sims themselves are still in the game, but many of his direct children were already ghosts by then, and the MCCC utility I foolishly ran deleted these, breaking the links on Demario’s family tree.

Oh well, time to start working on it again!

Demario’s first target was a young woman named Maki. Despite initial failures at wooing her, eventually Demario was able to charm her. After successfully Trying for Baby with Maki, Demario continued his quest to broaden to lineage.

Suffice to say, a trip to the bar and several Try for Baby sessions with several different Sims in the closet on-site, Demario’s quest was well on its way. I sped things along with MCCC, advancing the pregnancy stage of all the Sims Demario had hooked up with. Jaqueline, Wendell, Jonathan, Samuel, and Case were all born within a few days of each other.

Thus was the seed of Demario’s family tree sown.