There are large spoilers for Radiata Stories this week. If you want to remain unspoiled for Radiata, please do not read that section!

The rest is all spoiler-free!

I finished Radiata Stories this week. I’m just going to put some random screenshots here to create some buffer room before we get into spoiler territory. Hopefully this creates enough spoiler-free zone to allow people to skip this section if they don’t want Radiata Stories spoilers.

At around the halfway point, there’s a crucial decision you have to make: side with the Non-Humans or side with the Humans. Whichever side you join will make permanent enemies of everyone on the opposite, which makes joining the Non-humans at this point particularly vexing, because nearly all the friends you’ve made up to this point have been human. I went with the Non-human side though, because that’s the route I heard had a better story, but it was bittersweet leaving the vast majority of recruited characters behind. Seriously, my recruitable friends went down to 4 after the split. One of those, Ridley, is required, so she doesn’t really even count. Losing all those friends was a big blow, both to me and to Jack in the context of the story.

Understandably, Jack spends a long time after the split wondering if he made the right choice. I have to think that this is all intentional game design to make the choice of whether to join the humans or non-humans a difficult one, and it works pretty well if that’s the case. I didn’t want to side with the humans because they’re pretty difficult to empathize with (their goal is basically just to suppress or kill all the non-humans), but the non-humans aren’t great either, because they mostly want to kill all the humans except for the few on their side. The silver lining of the non-human side for me was that both Ridley and Ganz can rejoin your party on this route for the first time since the beginning of the game, so that was a nice reunion, at least for a while.

Some of the light-hearted tone and humor is still present even after the split, but it’s definitely more serious than the first half of the game. 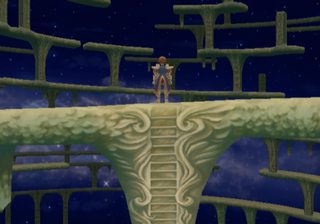 The final dungeon would have been a real pain if I didn’t have save states at my disposal. Reason being, the dungeon is a long vertical climb up ladders. First of all, climbing the ladders is pretty slow, so I was also glad I could turn on turbo speed to get through those faster. Secondly, rivers of sand could sweet you off your feet and carry you down several levels at a time, making you lose progress and forcing you to find the right ladders to slowly climb back up. I was annoyed by these thanks to the power of emulation - I made a lot of save states, and if I got taken down several levels by an unexpected sand river, I just reloaded my last save state. Playing without these emulator features would have made this dungeon very obnoxious.

The final boss, the Silver Dragon, was a reasonable challenge. It was pretty easy since I had plenty of healing items, I definitely struggled more against an earlier boss. The final boss didn’t have a special move that could one-shot me, so that made them easier than the earlier boss by default. The Silver Dragon still put up quite a fight though, and the fight took quite a while. Eventually, they went down, and the entire dungeon collapses. After a short scene, the credits roll. It was sort of an abrupt ending, definitely left a few questions in my mind, but the main plot points are more or less resolved, so I was okay with it. From the guide I’d been referencing, I know there’s quite a bit of post-game content I could get into. Lots of post-game bosses to fight, and some recruitable characters specific to the post-game. I don’t know if the post-game provides any additional lore or closure (I assume it does), but I don’t feel the need to get into it.

All in all, Radiata Stories was a good game. The pace was pretty slow at times, and I think I had the most fun prior to the split. The best part was exploring the city, seeing the tons of NPCs go about their day and learning how to recruit them. After the split, that part went away, and the rest of the experience felt a little…hollow, I guess? Maybe I would feel differently if I’d chosen the human side. I don’t feel like replaying the game to see what the human side is like, but I may watch some gameplay of it, or maybe a speedrun or something. My final play time according to my save file clear data was 25:58:48.

Started Gravity Rush 2 this week, and it has everything I enjoyed about the first game but bigger and better than ever! The main character, Kat, is also just as charming as ever. If you don’t like Kat as a protagonist then I don’t know what to tell you, you might not have a heart.

Instead of Hekseville, the setting of the first game, it takes place in a new city. The new city seems significantly bigger and with even more verticality than the world of the first game. At first I missed Hekseville, but I think the new setting was a good choice. It gives the developers freedom to do whatever they want with the world, and it is quite different from Hekseville! It’s made up of “islands” built on top of airships, which is pretty sweet.

Like the first game, there are a number of optional side quests and challenge missions to pursue if you so choose, but not too many of them so as to be overwhelming. A lot of the side missions make use of the new camera mechanic, and have you taking photos of people in the city, or showing people a photo to track down a specific person or something. The camera mechanic also serves as the game’s photo mode, and photos taken this way are saved to your PS4 hard drive just like normal screenshots. They’re a different aspect ratio though, sort of like a Polaroid.

There are a few other new features from the first game, like equipable talismans that give you various benefits. Mostly though, it plays like the first game, but it looks much better since it was built for the PS4 rather than the PS Vita. The menus also have a lot more style and flair.

It’s been super fun flying around as Kat again. Walking on walls, falling upward, and otherwise bending gravity to my will never fails to bring a smile to my face. I’m looking forward to seeing what the rest of the game has in store for me!

I just started this game, so I haven’t had much time with it yet. All I’ll say about it this week is that it’s an SRPG game with the familiar demons of Shin Megami Tensei, and incorporates a turn-based battle system similar to the Press Turn system. It’s been so fun so far, look forward to a more thorough write-up on it next week!