Everything is spoiler-free this week, because I only talk about one game, and I avoided spoilers for it!

Persona 5 Strikers released in Japan about a year ago as Persona 5 Scramble: The Phantom Strikers. It took a while, but eventually a Western release was confirmed, and it finally came out here last week. Naturally, I had it preordered, and spent basically every waking moment playing it after my copy arrived. It arrived on Tuesday, and I finished it on Sunday!

So what is Persona 5 Strikers (P5S)? Well, it’s like a spin-off sequel to Persona 5. I say that because while it features the characters of Persona 5 in a brand new story that takes place several months after the first game, it features action RPG gameplay instead of traditional turn-based gameplay. It’s from developer Omega Force, who are known for the Warriors series. Hyrule Warriors, Fire Emblem Warriors, and (of course), Dynasty Warriors are all from them. A lot of things from the recent Persona games aren’t here as a result. The time management is gone, as well as Social Links/Confidants. However, the style Persona 5 is known for is here in full force, with all flashy menus and UI elements you’d expect. 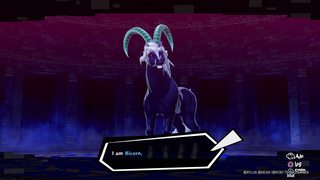 And though it doesn’t feature several elements of P5, other staple mechanics are very much present in Strikers, and quite deep as well. Persona fusion is present, and though the roster of available Personas is substantially lower than that of a normal game, there’s still plenty to enjoy with this feature if you’re into it, like skill inheritance and Persona strengthening.

The main gameplay loop generally consists of cutscenes and dialogue that advance the story, exploring and fighting your way through a dungeon, and some boss battles. Not always in that order, you will get some short cutscenes as you explore a dungeon, and there are a few longer periods of cutscenes between dungeons sometimes where the main cast just hangs out together. There’s also plenty of optional side quests if you want to get distracted by those. A lot of them are just defeating certain types of enemies or delivering quantities of specific items, but I enjoyed doing a number of them anyway.

As an action RPG, combat is quite fast-paced, and it gets a bit hectic at times. Sometimes you’ll be fighting large numbers of weak enemies at a time, and other times you’ll be fighting fewer foes that are much stronger. You’re able to control any member of your 4 person party, switching freely between them while exploring the dungeon or even during battle. The remainder of the Phantom Thieves remain on standby if you don’t pick them for your party, and can only be swapped in outside of battle. Each of them has the same general controls, but plays a bit differently, with different attack speeds and different combo attacks. Luckily the button inputs for the combos is consistent between characters, it’s just that the combos do different things for each one. They also have unique special skills, like being able to imbue their regular attacks with the fire element, or transforming into a car. Just normal stuff like that. 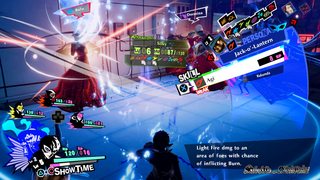 Aside from regular attacks, you can also summon the character’s Persona (or one of Joker’s many Personas if playing as him) to pause the action and choose one of the Persona’s skills to use. Like in P5, these skills cost either HP or SP to cast, and are extremely useful, especially support skills like healing or buffs. I’m grateful that the AI controlling the party members you’re not currently playing as is very good about healing you. One of the new characters in the game, Sophie, has several healing skills, and the AI was very good about using them whenever I or another member of the party was low on health, which was very appreciated! Initially, I felt pretty bad at the combat. Once I got used to the combos and abilities of a few characters, I really enjoyed the battles!

Exploring the dungeons was a lot of fun too. There are treasure chests to find, and the exploration itself sometimes involves sneaking around or shimmying along a ledge on a tall building. Persona 5 also had very light stealth mechanics like this, and Strikers likewise allows you to ambush enemies from behind or from a hiding spot for a damage bonus at the start of battle, and it’s satisfying every time.

As a fan of Persona 5, it was really cool just seeing the characters back together for a new adventure. I would have been satisfied even if the story was just okay, but I think the story in Strikers is pretty great actually. It’s a bit derivative of Persona 5’s story in a number of ways, sure, but it was still plenty interesting. I was always invested in what the next step was going to be for the characters, and PatronusLight (who was watching me play) and I had a lot of fun telling each other our theories of what we thought would happen next. As I mentioned a bit earlier, there are also a number of scenes where the characters are just hanging out. While these are mostly just fan-service without real character development (at least for the returning characters), I definitely enjoyed them. The returning characters from P5 might not see any real character development, but the new characters, Sophia and Zenkichi, get some real character development over the course of the game, and I ended up liking them both a lot.

One mild complaint I have is a graphical thing: there’s some pretty ugly aliasing on the character models. You might have seen it in some of the prior screenshots. I think the dark outlines around characters exacerbate the problem, the game hates those and they end up looking really jagged. To be fair, there’s a graphics option that you can switch from “Framerate” (the default) to “Graphics” that would presumably make the graphics look nicer, but I never tried it because I wanted a smooth frame rate for battles. The aliasing looked super ugly to me in the beginning of the game, but I guess I got used to it by the end because it stopped bothering me.

I would absolutely recommend Persona 5 Strikers to anyone who played Persona 5, as long as you’re okay with the combat system. Combat is very different from the turn-based system of Persona 5, so I can see how Strikers wouldn’t be for everyone. I really enjoyed it though. It’s not nearly as long as Persona 5, which makes it much more accessible for people without the 90+ hours of free time Persona 5 requires. As an example, the real gameplay loop of Persona 5 probably starts around the 9 hour mark or so - prior to that, you’re going through cutscenes, tutorials, and meeting characters. In Persona 5 Strikers, I was into the gameplay loop proper around the 3 or 4 hour mark. And that’s not to say you don’t do any playing prior to that in either game, but that’s the point in each game where it stops holding your hand and you start to get a feel for what the rest of the game is going to be like.

The music is a mix of tracks pulled straight from Persona 5, some brand new songs, and remixes of songs from Persona 5, and the end result is an incredible soundtrack! Hearing rock renditions of classic P5 songs like Last Surprise was really cool, and always got me pumped for boss battles.

I could gush and ramble on about Persona 5 Strikers for longer, but I think I’ll wrap it up here. If the amount of time I spent playing it this week didn’t make it obvious, I really enjoyed this game. My final playtime was 46:38, and I’m a bit sad it’s over to be honest. I’m planning to get 100% trophy completion for this game though, so I don’t have to say good-bye just yet!