Fair warning, there are final boss spoilers for Yakuza 0 in this post.

There are also spoilers for the first act of Shin Megami Tensei IV. If you haven’t reached the end of Naraku, then you will be slightly spoiled reading the section this week.

I finished the main story in Yakuza 0 this week! There are “where are they now?” type blurbs after the credits, and some of the events mentioned in these (or maybe all of them?) are what the first Yakuza game’s plot is all about. There aren’t spoilers in them, as far as I know. In fact, it was just enough detail to get me interested in the next game’s plot without revealing too much! 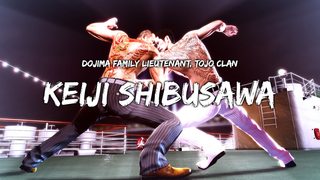 I have to say, the final boss battle was pretty epic. You play as Kiryu for this one, but don’t worry - Majima has his own final boss battle before this too. Anyway, the boss Kiryu fights is notable in that he uses the same fighting styles as Kiryu. Each of his phases is a different style, and from the very beginning I thought his moves looked pretty familiar. It was really cool having to battle a boss who fought similarly to Kiryu, both gameplay-wise and for its story significance. The fight kept me on my toes, considering how to best counter Kiryu’s own fighting styles. He was pretty tough too! Luckily, I brought plenty of healing items with me, and I definitely needed them several times.

After all the fighting is done, lots of cutscenes play out. I mean, lots. I think it was over 30 minutes of cutscenes, maybe even 45 minutes? There was a lot to wrap up though, and I’m not complaining, since I really enjoyed Yakuza 0’s story. The two main protagonists both get new wardrobes in some of the final scenes, and I’m pretty sure their new duds are the ones they wear in every other game in the series. There was an especially cool moment in one of Majima’s closing scenes. I won’t spoil it here, but it was something I didn’t even realize about his relationship with another character, and it sort of blew my mind. Thinking back, it definitely makes sense given the interactions and scenes the characters had together, but I hadn’t thought about it before. Oh, and the two protagonists finally meet in a post-credits scene, and Majima delivers a line that is apparently his trademark phrase in future games: “Kiryu-chan!!!”

Of course, finishing the main story in a game with as much side content as Yakuza 0 means I actually only completed 30.48% of the game, according to the Completion percent listed in my results summary. That’s what the Premium Adventure mode is there for! This mode is basically a sandbox where the main story doesn’t exist, you can switch between characters at your hideout, and change your clothes to various outfits. I enjoyed playing Premium Adventure for a few more hours this week, playing the business mini-games, and doing a little more side content for each character.

I think I might actually keep Yakuza 0 installed for a little while longer, to play a bit more Premium Adventure on occasion. There’s also a New Game+ mode, though I’m not sure what parts of your save file carry into the next game. I don’t think I’ll be replaying the main game anytime soon, but New Game+ is always a nice inclusion. I don’t want to get too caught up on completing all the side content in this game, since the backlog is always calling me, but it’s been so much fun that I can easily justify playing just a little more. The scary thing is, there are 7 more Yakuza games, and they probably each have similarly huge amounts of content. I’ll definitely be playing more Yakuza games in the future though, even if they completely overtake my backlog. Yakuza 0 was just so much fun!

I played a ton of Shin Megami Tensei IV this week.

There’s one early game spoiler I can’t easily write around this week, since the setting of the game changes drastically after this plot twist. After descending to the depths of Naraku, the player character and their fellow Samurai are shocked to discover an entire city underground, overrun with demons. They soon learn that this place is called “Tokyo,” a name unfamiliar to them. Exploring the ruins of Tokyo, meeting human survivors, and interacting with 2 opposing human factions, those being the Ashura-Kai and the Ring of Gaea, brought the story and gameplay up several notches in my book. Not that I didn’t enjoy the opening act set in Mikado, but after the plot twist that the entire ruined city of Tokyo was hidden beneath Mikado, I was more interested than ever before.

One of the pillars of the Shin Megami Tensei series are its multiple endings based on the player’s alignment. This is dependent on your choices throughout the game, and generally includes Law and Chaos, with a Neutral option sometimes available depending on the game. In Shin Megami Tensei IV, I think all 3 routes are available, and when one of the pivotal choices game up, where I had to side with either Jonathan or Walter, I had no idea who to choose. Neither option was perfect. I sided with Walter in the end, partially because I just like the character. For a while, I was really questioning my decision. Like I said, there’s no right or wrong choice. They all feel like different shades of gray. Siding with Walter has been cool so far, but I imagine in the end it will probably lead to lots of people dying…although the other endings might too, for all I know.

It doesn’t seem like I’ll be finishing the game by the end of the year. HowLongToBeat.com lists its main story at 43 hours long, and while I’m only several hours away from that, I think my final time will end up being higher, possibly around the 55 hour average completion time. There have been a few times I’ve wandered aimlessly when I couldn’t figure out how to get to the next destination, and that’s padded my playtime a bit. As I mentioned last week, Shin Megami Tensei IV feels very “old school RPG” in some of its design, mostly in that it doesn’t hold your hand. You have to explore and talk to NPCs to figure out how to get to different parts of the world. It’s honestly pretty refreshing in some ways, and has lead to me gaining a lot of experience as I battle a lot of demons while figuring out where to go next!