Ori and the Blind Forest (PC)

I finished Ori and the Blind Forest this week! My final time was 05:02:08, with 221 deaths. Not bad, I think. I actually finished the game without learning 2 entire traversal abilities. It’s pretty interesting that the game is designed in such a way that you don’t actually need all the abilities to finish it.

So there are a few “dungeons” in the game, and each one ends in an escape sequence. These are usually pretty intense platforming challenges where you’re on some sort of timer, so you have to be both fast and accurate with your platforming. The final dungeon’s escape sequence was probably the easiest in the game though, but that might be because of all the traversal abilities I had unlocked by that point. It was still fun, it’s just interesting that it wasn’t nearly as hard as the ones before it.

The ending itself is nothing short of beautiful. I didn’t really mention it last week, but the story of Ori and the Blind Forest is really emotional. It’s not a story focused game, so the story is pretty simple, but it’s very effective. I enjoyed the game so much, that I actually loaded up my save after finishing the game and explored a bit more, collecting the abilities I’d missed and picking up some more collectibles from around the map. I still didn’t go for 100% completion, but I enjoyed a few mores hours worth of running around the map with all the endgame abilities unlocked. Ori and the Blind Forest definitely gets my recommendation if you’re looking for a great platformer, or a platforming-heavy metroidvania!

Yakuza is a beat ‘em up/action-adventure series that’s been around since 2005. Chronologically, Yakuza 0 is the first game in the franchise, but it was actually the 6th main game released, and serves as a prequel to the first game. I hadn’t played any of the series before, so starting with Yakuza 0 seemed like a good idea!

Most of the games in the series, including Yakuza 0, follow main protagonist Kazuma Kiryu as he navigates through the yakuza crime world, which he himself is a part of. The storyline primarily revolves around crime drama, with power struggles between higher ups, and scuffles to snatch up real estate and gain power. Kiryu finds himself caught in the crossfire, and it’s honestly pretty interesting seeing how Kiryu responds to the situations the plot puts him in. Kiryu is a very stoic guy, and incredibly capable in a fight. He seems like he’d be right at home at the protagonist in a shonen manga or anime. It’s super fun controlling Kiryu and beating up a bunch of goons all at once! 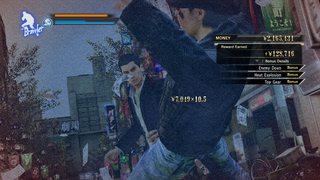 Combat gameplay involves switching between different fighting styles. In each one, you can chain togther fast and strong attacks into combos, but each style still feels unique. Brawler style is balaced, whereas Rush is all about faster, weak attacks. Story missions often contain at least one battle, and you’ll be pursued and attacked by goons as you run around the city between missions too. It’s a solid system, and made even better by the fact that dollar bills explode out of your enemies as you defeat them, and Kiryu gains hundreds of thousands of yen by beating people up.

Aside from the main story and combat mechanics, there are a ton of mini-games and side quests. Karaoke is a pretty fun and hilarious rhythm mini-game, as is disco dancing. You can also play real Sega arcade games like Out Run at several arcades in-game.

I’ve only just reached another bit of gameplay, Real Estate Royale, where Kiryu can purchase properties around town, assign managers to them, and collect profits. There have also been a few chapters in my playtime so far where I’ve played as Goro Majima, another protagonist of Yakuza 0. I’ll probably write more about both of those parts next time, after I’ve experienced more of both. I’m particularly interested in seeing where Majima’s story goes, because the last chapter I played as him ended in quite a cliffhanger before control switched back to Kiryu for the next few chapters!