Once again, the Danganronpa V3 section is spoiler-free.

Before getting into the usual recap, I want to acknowledge this blog milestone: this is the 100th weekly post, and 100th week in a row that I’ve made one of these weekly updates! Triple digits! I’ve really enjoyed writing these, I can’t believe I’m at 100 of them already. Time flies I guess! Whether this is the first weekly update you’re reading, or the 100th, thank you for reading!

I finished Danganronpa V3 this week, and it was everything I could have wanted from the final Danganronpa game! The main scenario writer and creator of the series, Kazutaka Kodaka, left Spike Chunsoft after V3 released. While it’s not impossible that there will be a new Danganronpa someday, I think it’s unlikely, and I feel like V3 was created with the intention of being the end of the series.

Rather than risk spoiling something by talking about the game’s latter half, instead I’ll focus on the bonus modes you unlock after beating the game. These are jam packed with love for the entire Danganronpa series, featuring characters from all 3 main games! The first mode is the Training mode, where you choose a Danganronpa character and play a board game to level them up and increase their stats. Your play 3 boards, each one representing a year of that character’s high school life, and the objective is to reach or pass the goal space before the end of the school year. A month passes after each action, so you have to keep an eye on the remaining spaces to the goal when choosing which paths around the board to take. This one’s pretty fun, it seems like a nice mode to play while doing something else, like watching TV, since it doesn’t require much focus.

Training mode goes hand-in-hand with the Dungeon mode. In dungeon mode, you build a party of up to 4 characters out of the one’s you’ve trained in Training mode, then enter a 50-floor 2D dungeon. This mode is pretty much a simple roguelike, though I don’t know if the floors are randomly generated or not. You collect treasure chests, fight in turn-based battles through random encounters, and craft new gear using drops from the enemies you defeat as you make your further down in to the dungeon. The gold you earn from battles in this mode can also be used to unlock characters from Danganronpa 1 and 2, and those characters can be trained in Training mode and added to your party here as well, forming a pretty neat gameplay loop for these 2 modes.

The final bonus mode is akin to the dating sim bonus modes of the previous games: Salmon Team. The difference here is that there’s no resource-collection mini-game like there was in the previous entries, but I think that’s fine since there’s so many different bonus modes in V3. This mode is an alternate story in which the killing game is replaced by a dating game, and you just have to fall in love with someone to escape the Ultimate Academy. You play as Shuichi in this mode, and it serves as an easy way to increase your Friendship level with all the characters. Of course, you can also go on dates with them by spending Date Tickets. One pretty amusing part of these dates is that you’ll sometimes enter a brief Class Trial mini-game during them, where you hear the other character’s inner thoughts and have to shoot through their doubts.

That about sums up the bonus modes. They’re pretty grindy, but served as a neat diversion for an hour or two. I never got that into the bonus modes in the previous games, and I didn’t really get into them much in V3 either, but I think these are probably the best bonus modes in the series. A lot of love for the series as a whole seems to have gone into them, and in the Training mode you’ll sometimes see fun crossover events where characters from different Danganronpa games meet up and have a fun conversation.

I’m so glad I got into the Danganronpa series. Finishing Danganronpa V3 was bittersweet, since it’s nice to say I’ve played all the main games in the series, but I’m definitely going to miss Danganronpa’s plot twists and unique humor. I think V3 has the best class trial gameplay in the series, and possibly the best story as well. It’s really hard to say, they’re all so good! I can definitely see V3’s story alienating some fans. I won’t say more than that to avoid spoilers, but I thought it was brilliant, personally. I definitely recommend playing Danganronpa 1 and 2 before V3, because it really makes all the little references in V3 worth it!

Ori and the Blind Forest (PC)

I was craving another metroidvania, so I started Ori and the Blind Forest this week! As far as metroidvanias go, it definitely leans more towards platforming than it does action, but it’s still definitely in the metroidvania space with its non-linear exploration, power-ups, and backtracking. You play as the title character, the guardian spirit Ori, on their quest to restore life to the forest’s Spirit Tree.

First off, this game looks great. It’s all 2D (well, some objects are 3D), with great backgrounds and vibrant colors. The zoomed out world map is also gorgeous, and the zoomed in map is pretty nice to look at too, but more importantly it’s also a very functional map.

As I mentioned, there’s a heavy focus on platforming in Ori. As you explore, you’ll gain access to a slew of new abilities that add more depth to the platforming. Movement ends up feeling pretty unique in the end, with Ori able to climb walls, and intercept projectiles and enemies in mid-air to launch himself in any direction. This latter ability in particular took me by surprise, it’s pretty awesome. That ability is called “Bash,” and it’s pretty satisfying stringing together multiple Bash moves to navigate around some of the platforming challenges.

The platforming is quite challenging at times, but that’s balanced by the unique checkpoint system. There are fixed warp points around the map that you can also save your progress at, but most of the time you’ll be using the Soul Link feature to save. By spending Spirit Energy, a resource that you find around the map as you explore, you can create a Soul Link where Ori is standing. This saves your progress, so you have to weigh the options and choose to either save your Spirit Energy for strong attacks in battle, or spend it to save more frequently. I usually take the latter option, because there have been some platforming sections where I was really glad I could save right before them so I could just retry repeatedly until I made it through them. 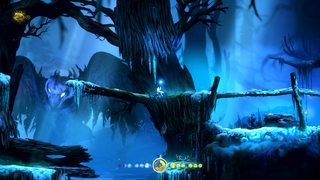 I think the biggest thing I’m missing in Ori are boss battles. There are some arenas where you’ll fight slightly stronger enemies, but these lack the feeling of true boss battles that you’d find in other metroidvanias like Hollow Knight or Symphony of the Night. Maybe the reason for this is that combat isn’t really the focus in Ori. You have a few different attack options, but largely you’ll just be spamming the attack button to damage enemies with Ori’s standard Spirit Flare attack, which auto-targets nearby foes. Also, I think some of this game’s platforming challenges are supposed to be its boss battles, because they are quite challenging, and overcoming them provides a similar feeling of relief and accomplishment.

I’m probably about 2 thirds of the way through the game right now. In my 4 hours of playtime, I’ve died 185 times so far. There’s definitely trial and to error to some of the tricky platforming segments. I’m looking forward to finishing Ori and the Blind Forest next week, it’s been a really good experience so far overall!