Golden Sun always seemed appealing to me. The pre-rendered 3D style sprites and pseudo 3D effects in battle looked amazing on the GBA. I had a chance to play some of Golden Sun: The Lost Age as a kid, but I never got into it, probably due to feeling lost since it is a direct sequel to Golden Sun, which I didn’t own. Now, I’ve finally gone back and played both games, and found them to be a great, classic RPG experience! 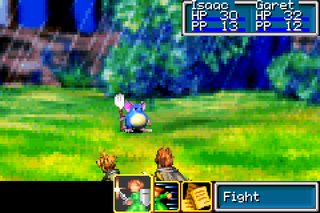 Golden Sun was developed by Camelot Software Planning, and released in 2001 for the Game Boy Advance. However, this game only tells the first part of the story. A direct sequel would release in North America in 2003, Golden Sun: The Lost Age. Together, the two games deliver a very compelling RPG experience exclusive to the GBA.

Golden Sun and its sequel play like RPGs that very well could have existed on the SNES. Lots of elements in their design remind me of a traditional RPG, and that’s not a bad thing.

For one, there’s a proper overworld in both games. This is where you’ll spend your time exploring between dungeons and towns, and where you may find a few secrets waiting for you if you’re either extremely thorough in your exploration, or just lucky.

In both the overworld and in dungeons, battles occur via random encounters. This further likens them to classic RPGs like Final Fantasy or Dragon Quest, and while I’m not usually the biggest fan of random encounters, they felt good in these games. The encounter rate was balanced, although it did feel like encounters were slightly more frequent in The Lost Age.

Golden Sun also feels retro-inspired in how it guides you forward. There’s not a lot of hand holding here. You’re given a general goal, but it’s up to you to figure out how to move toward it, little by little. You need to talk to NPCs in order to learn about the area, and get clues on how to proceed and where to go next. Sometimes, you just need to explore on your own to find the area.

The Lost Age takes this even further. There are non-linear sections where you have a goal, but the means to accomplish it are unclear, and require a lot of exploring (or a guide) to figure out.

The games take place in the fantasy world of Weyard. The magic in Weyard is called Psynergy, and the wielders of this power are known as Adepts. With a few exceptions, only Adepts are aware of Psynergy’s existence. A small village of Adepts called Vale is where the story begins, with the player naming and controlling their silent protagonist, who I left with the default name: Isaac.

The story here doesn’t do anything too unusual, but it’s a fun adventure all the same. It’s the details and nuances of how the plot plays out that keep it interesting, but I won’t get into them in the interest of avoiding spoilers. I will say that it’s very interesting where the plot leaves off in Golden Sun, and where it picks up in The Lost Age.

The presentation here is just top notch, and oozes with charm. The sprites look like they’re pre-rendered 3D sprites, similar to Super Mario RPG. The character sprites stomp around, or have little speech bubbles denoting various emotions during cutscenes. This adds a lot of charm, and there are a few characters whose dialogue is exceptionally charming, particularly in The Lost Age!

I can’t do a review of Golden Sun without mentioning the music. Motoi Sakuraba composed for both games. Known for composing for the Tales series, Sakuraba has a wealth of experience composing for JRPGs, and delivers more wonderful songs in these games. The battle themes have an excellent energy to them, which is especially important considering you’ll be hearing them frequently.

In towns, dungeons, and other areas, you’ll come across a number of puzzles. These are usually some variation of block pushing puzzles, and they may or may not require you to use Psynergy to complete. Certain Psynergy skills like Move and Whirlwind can be used outside of battle, and you’ll have to do so many times throughout your journey.

Overall, these puzzles are well designed. They’re usually not too difficult, and the solution can be reached pretty naturally. There are a few rare exceptions to this though. A few puzzles have such obtuse solutions that I had to look up a guide in order to move past them. Sometimes the solution seemed obvious in hindsight, but at least one time the solution was so out there that I felt justified in using a guide.

Most of the puzzles that aren’t required have some optional treasure waiting for those who solve them. Sometimes this is a unique weapon or armor, and the rest of the time it’s a Djinn waiting to be added to your party. Some of these Djinn can be easy to miss, but it’s extremely useful to recruit as many of them as possible, since they play a huge role during battle.

Character and enemy animations during battle look superb for the GBA, with impressive looking pseudo 3D effects. The battle system is turn-based, with standard attack, magic, item, and defend options available to each character. The Djinn are what set it apart from other battle systems.

Djinn have several states. They can be Set to a character, on Standby, or in Recovery. When a Djinn is Set, it changes the characters stats and may change their available Psynergy as well. Furthermore, a Djinn that is Set may be unleashed by that character to trigger some sort of effect. Usually, this is an attack of some sort, but Djinn can have other effects as well, like healing a character, or protecting the party from damage.

After a Djinn is unleashed, it will go from Set to Standby. While in Standby, it no longer provides stat bonuses to the character it was Set to. However, Standby Djinn serve another equally important purpose: Summons. One or more Djinn on Standby can be used to Summon powerful attacks. After being used for a Summon, a Djinn goes into Recovery, and can’t be used for several turns. Once the requisite number of turns passes, a Djinn in Recovery will automatically become Set on its original character again, and the cycle starts anew.

This Djinn system is absolutely necessary against many bosses, especially the Djinn that protect the party from damage for a turn when unleashed. Summons are also a great way to deal damage to bosses, who have much larger HP pools than regular enemies. 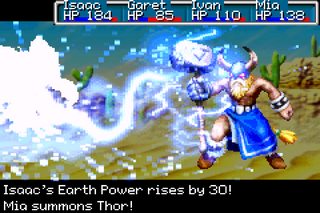 Djinn also open up new strategic opportunities in battle. One option is to leave all your Djinn on Standby before entering a battle, and then using your most powerful Summons on the first turn. I employed this strategy a number of times when playing the games, and it’s a pretty awesome feeling breezing through battles with regular enemies by unleashing powerful summons like Thor right away.

Overall, I really enjoyed playing through both games, but there were some points that grew tedious. For instance, in the first game I ended up having to navigate through the final dungeon several times, because I was unprepared when I reached the final boss at the end. I could leave the dungeon instantly using the Retreat Psynergy, which is a nice feature. This allowed me to leave and collect more Djinn, but when I returned I had to go through much of the dungeon again. This is by no means a universal problem, but if you miss a number of Djinn like I did you could easily run into the same situation

In The Lost Age, I used a guide more often throughout the game to make sure I got as many Djinn and powerful weapons as possible. Because of this, I was well prepared for the final boss. However, I think another aspect of it is that the final dungeon of The Lost Age is just designed to allow you to leave and come back more conveniently.

In spite of my complaints, I really enjoyed both games. Had I played them when they came out, I’m sure I would have been blown away by the depth of this experience on a handheld. Golden Sun and Golden Sun: The Lost Age are definitely worth playing if you enjoy old school RPGs!