Pathway released today on PC! Published by Chucklefish and developed by Robotality, it’s available on Steam and GOG, and is also being sold on the Humble Store (for redemption on Steam), which is where I picked up my copy!

Pathway is a turn-based strategy RPG that takes a lot of inspiration from Indiana Jones in the best possible ways. Read on for my initial impressions on this new indie title. 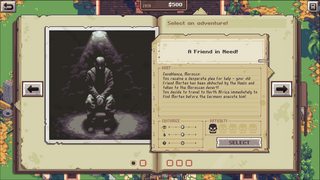 Pathway consists of 5 different “Adventure” campaigns. The first of these is “A Friend in Need!” which sees the team you assemble facing off against Nazis in the Moroccan desert in order to rescue your friend Morten. This is the only unlocked Adventure to begin with, and the other Adventures build upon the story that’s set in motion here.

From the character selection screen when beginning an Adventure, you can see that there are several characters to choose from off the bat when building your party. There are also 10 unlockable characters, with various unlocking conditions. I haven’t looked at the conditions to unlock them yet, but despite that I already unlocked 1 of the characters during my first Adventure, and I’m looking forward to unlocking more!

Side note, when an RPG has characters that receive a “+20% damage vs. Nazis,” it seems like a safe bet that you’re in for an entertaining ride.

Once you build a party and start an Adventure, the map for that Adventure is generated. Now, since I’ve only played one Adventure so far, I don’t know if the layout of the points on the map changes between playthroughs of an Adventure, but I know that the locations of certain points of interest and the random events that occur on each point should vary between playthroughs. From this, the developers claim no 2 playthroughs will be the same. This should keep each replay of an Adventure feeling fresh, which is good because you might need to replay them from necessity should you fail on your first attempt, like I did!

Yes, my first Adventure in Pathway ended in my defeat. But it was still a ton of fun! One of my two adventurers was KO’d and I couldn’t heal them in time, but I found a dog companion to replace them. Of course the dog couldn’t wield a gun, so they weren’t a complete replacement. I went into the final battle of the Adventure with only the dog and my remaining adventurer, and the adventurer was already pretty injured when battle began. They never had a chance!

In the end, my party defeated 21 Nazis in total, and came out with $1736 worth of valuables. The entire thing took just under an hour, mostly because I was familiarizing myself with the mechanics. Future Adventure playthroughs probably will go faster. One thing I did miss, you don’t seem to be able to save in the middle of an Adventure to continue later. You have to play the entire Adventure in one go. An Adventure probably won’t take longer than an hour, but it is something to keep in mind if you only have a limited amount time for a gaming session.

Failure isn’t a bad thing in Pathway. Your characters keep the experience and treasure they collected, which should give them an edge in future Adventures. The difficulty of an Adventure can also be adjusted before starting, which is nice if you want more or less of a challenge.

The basics of Pathway were pretty easy to pick up, I didn’t really have to read through any tutorials to start playing. Of course, there is a pretty extensive guidebook of information on game mechanics available in-game whenever you feel like reading up on a certain aspect of the game, so that’s cool.

Of course, a large part of Pathway’s gameplay consists of turn-based battles, and this part is fantastic. For strategy RPG veterans, it plays out like you’d expect. You alternate turns with the enemy, moving and attacking with your units on your turn. Guns play a large role in combat, and therefore so does cover. Ending a unit’s turn outside of cover is basically a guarantee that they’ll be hit by enemy gunfire. Reloading also has to be kept in mind, each character can shoot only a few times before they need to reload, which uses up a share of their allotted actions in a turn.

Characters have both HP and Armor. In a single Adventure, the damage a character takes to HP and Armor persists between battles, so you may need to keep an eye out for HP recovery and Armor repair items. Or, cross your fingers and hope you find new armor equipment over the course of the Adventure to replace your damaged equipment. All of this combines to make for very satisfying combat, in which maintaining your party’s battle efficiency is as important to victory as your battle tactics.

I’ve really enjoyed Pathway so far, though admittedly I haven’t experienced a lot of it yet. The battle mechanics are solid, and the random events on the map that have you make decisions give it almost an Oregon Trail sort of feel, or The Banner Saga for a more contemporary example. Managing resources like fuel, ammo, and inventory space also adds a nice layer to the Adventure.

I see Pathway as a game I’ll keep installed on my PC, and maybe even install on my (aging) laptop, so I can play an Adventure every so often. The promise of no two Adventure playthroughs being the same makes a solid case for its replayability. From what I’ve seen so far, it’s definitely a game I’ll want to keep coming back to as well!

A huge thank you to Robotality and Chucklefish for bringing this game into the world. No doubt the journey to Pathway’s release was a difficult one, but as I and all the others enjoying the game can attest to, the results speak for themselves: Pathway is awesome!