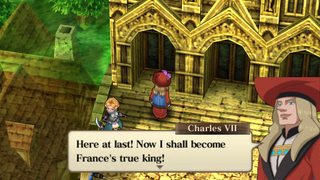 At the end of last week, I was stuck struggling with a mission where you have to escort the dauphin to the cathedral so he can be crowned king, while he does his darnedest to put himself directly in harm’s way. Well, I can happily report that after several more attempts and losses, I finally got him to the cathedral! The key for me was keeping with my current strategy, but most notably rushing ahead as much as possible with the majority of my force, except I had to leave some units by the beginning of the stage. This allowed me to counter the reinforcements that showed up, specifically the archer that spawns at the beginning of the stage a number of turns in.

I was given a choice between 2 locations this week, and I imagine the mission you do differs based on your choice. I chose Saint Pierre-le-Moutier, and there met and recruited Claire, a witch who claims to be invincible. Well, she’s very much not invincible due to her low health and defense, but she does have some good spells. I assume had I picked the other option I would’ve gotten a different character, and I’m sort of left wondering if I made the best choice. I do like mages in general, but I’m not sure if I really needed another one in my team. Oh well. 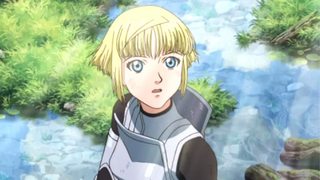 The story has taken some large steps forward now. I don’t want to spoil anything here. The historical basis on the story of Joan of Arc is visible, but there’s also a number of other things going on that keep it interesting. I think I can share another screenshot of the gorgeous animation without spoiling anything though. I would totally watch an anime adaptation of this game if the quality was on par with the in-game animated cutscenes, the backgrounds just look amazing, and the characters as well. I’m pretty sure no such anime exists though. 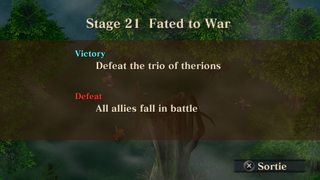 Gameplay-wise, the scenarios continue to have interesting premises and victory conditions. The challenge is ramping up though, during one stage you need to defeat the 3 therions that have been pursuing Jeanne for much of the game, but you only have 2 units to do so! I failed this one several times before finally finding a strategy that worked. In the end, I barely scraped by too. One of my two units had fallen, I was only 1 or 2 turns away from the turn limit, and my 1 remaining unit was quite low on HP. With a few lucky rolls on the RNG though, I grasped victory.

The enemies I’m facing now are also full-blown Demons from time to time. One of these posed quite a challenge, a demon known as Superbia. You have 20 turns, a common turn limit in this game, and in that time all you need to do is defeat that hellish-nightmare-demon. The catch is, only Jeanne starts in the room with it, and my Jeanne was doing all of 12 damage with a regular attack. So I needed to get my other 4 units into the room with Jeanne and Superbia, but they had to take the long way, which takes about 10 turns. After challenging the stage several times, I had lost each time due to the turn limit, while at the same time barely making a dent in the demon due to its high HP and the fact that it regenerates 120 HP per turn. My strategy wasn’t working, so I did the only thing I could do: started grinding EXP using Free Battle. It wasn’t something I really wanted to do, but facing Superbia with the level my units were at was just such an insurmountable task. I also read some tips on GameFAQs, to see how others were able to beat Superbia. This led me to reinstate the archer Marcel in my team, as he has generally higher attack than the other archer I had been using. In the end, I finally beat Superbia by surrounding it on all four sides and just whaling on him with my units’ strongest attacks, and also making use of the damage bonus from Burning Aura as much as possible. I managed to beat the level with a few turns to spare!

That ordeal with Superbia nearly drove me to my limit, to be honest. It just felt like such a huge wall that my enjoyment of Jeanne d’Arc waned significantly for a bit there. My biggest takeaway from this I guess is that Jeanne d’Arc may have more in common with the Disgaea series than I initially thought. Sometimes, you just need to grind. Although, since then I’ve faced a few more powerful demons, and didn’t struggle with them nearly as much. Each time, the “surround with 4 units and beat them down” strategy has served me well.

Outward is a new RPG that just launched on PC, PS4, and Xbox One. For me, the big selling point was local split-screen co-op! I bought it on launch day so PatronusLight and I could play it. We did play it for a bit, and it seems solid actually. A number of survival-style features, like thirst, hunger, and sleep are present, as well as a crafting system. There’s also the usual RPG inventory management, and all of this handled quite well with a controller. We didn’t get a chance to do much combat while we played. Didn’t really get into the story either, I’ve read it’s pretty open-ended once you get into it though. For us, it was okay, but it didn’t really grab our attention.

In the end, I refunded Outward. Not because I think it’s a bad game, and I may re-purchase it later on a sale, but it just wasn’t compelling enough for PatronusLight and I to justify paying full price.

This is a large contributing factor to why I got a refund for Outward. PatronusLight and I bought a Switch this week, and our first game was the LEGO Harry Potter collection!

We’ve played both games in the collection together before, but never on the Switch obviously. We both enjoy Harry Potter and the LEGO gameplay formula, so these games should provide more hours of enjoyment. Due to the portable nature of the switch, we can play anywhere we want too, and that’s pretty cool!

I’ve always loved the cute and quirky presentation of the LEGO video games. The Harry Potter ones especially seem to get me chuckling to myself more often. Plus, playing it in co-op is always a lot of fun. A large part of this is because PatronusLight and I always have a lighthearted competition to see who can get the most studs in a level.