This week, all I played was the PSP game Persona 3 Portable. I’ve tried to keep out any plot spoilers, but if you want to play P3P yourself someday and go in blind you might not want to keep reading! Some screenshots may shed light on when and what sort of events happen at certain points in the game. Now that you’ve been warned, here’s my summary of my gaming week!

To start off, I’ve moved from playing P3P mostly on my PSTV to playing it entirely through the emulator PPSSPP, both on my phone and on my PC. There are some drawbacks to using an unofficial emulator like PPSSPP, like a few minor graphical glitches. These are most likely just due to my settings though, as I’m rendering the game at 4x the native PSP resolution. The benefits of PPSSPP are well worth it though, it has everything the PSTV can do and more. It supports save states and saves them basically instantly, and of course my most used feature, the speed toggle that you can use to fast forward, causing the game to run super fast while holding the mapped hotkey button. Many emulators have this feature. In P3P, I use it skip past a lot of the battle animations. Don’t get me wrong, I really enjoy the battle system in P3P, but after seeing Mitsuru summon her Persona Penthesilea for the thousandth time, I don’t really need to see it every time I have her use a skill! Anyway, as I mentioned you see some weird glitches in some of the screenshots this week, as a result of me using PPSSPP now.

One new feature in P3P that I totally forgot about last week, you can go on rescue missions to save people trapped in Tartarus! These are time sensitive. Generally, the way it’s gone so far is you hear about people disappearing mysteriously, and the game tells you that these people are trapped in Tartarus. Once you go to Tartarus during the evening, if there are people lost inside you are informed of a range of floors they may be on. So, you start exploring the tower along those floors to find them. When you find the right floor, you just need to track them down, and when you find them you teleport to the entrance of Tartarus to save them if you want to (you can choose not to!). You get rewards in the form of money or items for each person rescued, so it definitely seems worthwhile.

Another reason I really like this new feature is it gives the player more incentive to explore Tartarus. Rather than just climbing floors you’ve already climbed before to grind for experience, now you’re working to rescue a missing person in return to rewards, and any enemies you fight along the way for experience are just a bonus! One last note about this feature, sometimes a missing person will be one of your Social Links! I assume this prevents you from raising that Social Link as long as they as missing, but I haven’t tried to visit them while they’re missing so I don’t know if there’s special dialogue or anything like that.

The general pattern Tartarus follows is you can freely climb the tower, and every so many floors you unlock a teleporter so you can return to that floor later. The teleporter floor also always has a boss that you must defeat to continue climbing higher. One of these teleporter floor bosses recently wiped the floor with me several times. Seriously, I died to this thing 3 or 4 times before I finally scraped through! It had a dangerous combination of powerful wind magic and the Sexy Dance skill, which targets your whole party with a chance to inflict Charm on your members. Charm is a nasty status effect in that a Charmed character will attack will either do nothing on their turn, attack their allies, or (if they are capable) cast healing magic on your enemies! So if Sexy Dance manages to hit every member of the party and charm everyone, you’re pretty much out of luck as your party members will attack each other while the enemy continues to devastate their HP with its attacks. I was not properly prepared to deal with the Charm, the only thing I had to cure it was about 10 Dis-Charm items, which remove Charm from a single character. I got lucky when I finally beat the boss because it didn’t even try to Charm me that time, thankfully!

In other news, I’ve formed a few new Social Links. There’s the Businessman social link for the Devil arcana, who you become acquainted with after he swindles you out of 40,000 yen.

Then there’s the Social Link with a Dying Young Man, for the Sun arcana. He has a genetic illness with no known cure. Persona 3 features a lot of themes related to death and dying, and this Social Link very obviously connects to those themes as well. 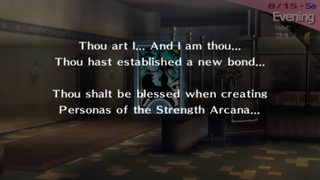 The rest of the new Social Links I formed this week are with new party members! There’s the Strength arcana, formed with party member Koromaru, who is a Persona-wielding dog. All of his dialogue is a combination of woofs, barks, and whines. At one point you can take him to the movies, and I think he was disappointed that a movie he wanted to see wasn’t playing, but he cheers up after you promise to buy it for him on DVD when it’s released.

The middle schooler, Ken Amada also joined the team. He’s nervous to be hanging out with a high school student, so your Courage needs to be Badass before you can start his Social Link. Ken is the Justice arcana Social Link.

Lastly, the final team member Shinjiro Aragaki joined. He puts up a harsh front, but when you form his Social Link, that of the Moon arcana, you find out that he cares a lot about the rest of the party members.

He’s always asking if everyone’s eating properly, and otherwise secretly looking out for everyone. He’s also a very good cook, and there’s a heartwarming event in his Social Link where he makes dinner for everyone after you suggest it. It was so sweet. I quickly got his Social Link to Max rank.

Now, I believe the only Social Links I haven’t formed are with Mitsuru (Empress) and Aigis (Aeon). Mitsuru is technically available to form a Social Link with since early in the game while playing as a Female character, but your Academics needs to be maxed out, which you can’t realistically accomplish until later in the game. Aigis I won’t be able to form a link with until late in the game, assuming it’s the same as in Persona 3 FES, as her Social Link is locked behind story progression. 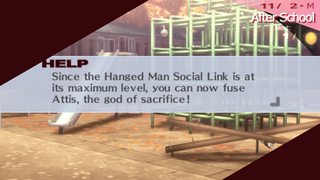 Aside from forming new links, I’ve also been continuing to rank up the Social Links I’d already formed. The Hanged Man Social Link has been maxed out, allowing me to fuse the Persona Attis once I’m a high enough level. I think Attis might require me to be around level 70-80…? I imagine it’ll be a while before I can fuse them.

Meanwhile in the main story, the plot really picked up in the parts I played through this week. For a while, there were story-related cutscenes After School every day. Things develop rapidly, at least compared to the start of the game. One NPC made a remark that seems pretty meta, about how the first semester is just a warm-up, and “the game starts for real during the second semester.”

It really is pretty true, the latter half of Persona 3 gets wild. I reached the point where two shocking plot twists occur, during which the entire party is quite shaken. Of course I’m not going to outright spoil what happens. I will say that when I first played Persona 3 FES, I did not anticipate this at all. Now, playing through the story again in Persona 3 Portable, I kinda saw subtle hints leading up to the first twist that not all was well. Small bits of foreshadowing in the way characters behaved seem to be interspersed throughout otherwise normal days. Maybe I’m making it out to be more than it is though, since I now know all the twists Persona 3 has in it! Sometimes I wish I could experience it for the first time all over again. In any case, the events cause dramatic changes for several characters, leading to them awakening to new Personas! These “second awakenings” were something I hadn’t anticipated the first time I played, and they’re still very cool to see.