I’ve been advancing my social link with one of the members of my team, Junpei. This week, I reached Rank 10 in the social link, the max rank! Maxing out a social link is beneficial for a few reasons, namely that you unlock the ability to fuse the “ultimate Persona” of that arcana, but also because I never have to hang out with Junpei again, checking that one off my list and leaving more time to spend boosting other Social Links. 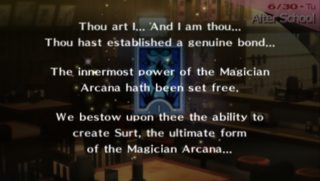 Beyond that, the in-game days are progressing steadily. I’ve forged new Social Links, and I’m very close to maxing out 2 others!

Plot-wise, Persona 3 does take its time to be honest. In the beginning you’re given a basic goal, but the pacing is unlike probably any other game I’ve played in that you spend a lot of time just doing the old routine, school during the day and fighting shadows in Tartarus at night. The other Persona games I’ve played, 4 and 5, are close, but still not quite like Persona 3. Only now, after about 20 hours in, does the main plot begin to develop further, and a sort of “primary goal” begins to take shape. I like it a lot though, the pace is relaxing!

I just made it past a part where you visit the beach with your friends at Yakushima, and Junpei was loving seeing the girls in their swimsuits.

Also, Fuuka delivered the most relatable line of dialogue ever. 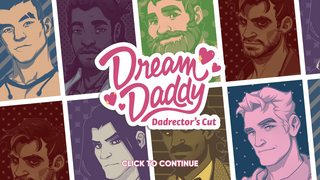 Okay…this isn’t a game I had heard of or ever imagined myself playing. That is, until PatronusLight and I watched CallMeKevin play it, and saw how hilarious it was. After that, I went into “watch-for-sales” mode, and lo and behold, it went on sale this week to the historically low price of US$4.65. So, I bought it.

It’s mostly PatronusLight playing this, and I just watch, chuckle, and recommend which dialogue option to pick from time to time. It’s been a wild ride. The song on the Main Menu is stupidly catchy while also being hilarious. 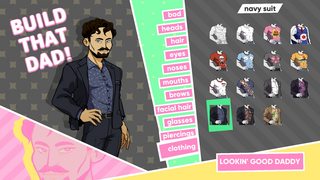 PatronusLight and I have been singing it and giggling it like crazy all week. The game itself is interesting, to say the least. First, you have to create your own Dad character, of course. PatronusLight and I made “Harry Worm”, a dad who apparently wears his suit at all times. Seriously at one point, he went to the gym and the dialogue mentions how changed into his most gym appropriate clothes…but it still showed him wearing his suit when he got to the gym.

The dialogue has a bunch of jokes and quirkiness left and right. Of course, there’s plenty of dad jokes in it too. Not all of it lands, but I’d say it’s pretty entertaining overall. The best part so far was when the game went into Gen 1 Pokémon mode and you battle another dad in a bragging content over whose daughter is better.

A main feature is also “DadBook” where you go to date the game’s 7 dads. In order to create our in-game profile, we had to answer a series of questions. Some of the answers resonated especially well with my sense of humor. Not sure what effect these answers have in-game, if any, but they were amusing at the very least.

Near the end of the week we went on our first “Dad Date.” It wasn’t much of a date because our daughter was there for a lot of it, PatronusLight felt that was lame. 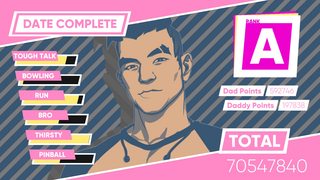 At the end you get a score based on your “Dad Points” and “Daddy Points”, I guess? We did score over 70 million points on that Dad Date, that seems like it’d be good but the game might just throwing huge numbers out there for laughs.

We’ll have to compare it to the score we get when we play more and go on another Dad Date.