I finished my first playthrough! The main story was dope! I don’t want to divulge any details about it to avoid spoilers, but at a certain point in the main story missions, I just got hooked and it was one thing happening after another. The pace was excellent starting near the end of the second Act, and continuing until the final mission. It was crazy awesome! I plan on writing a full, thorough review of Fire Emblem: Awakening in the near future, where I’ll analyze and break down my thoughts on the game as a whole. But for right now, just know that I had a hugely enjoyable time with this game!

Before finishing the game, I also finished all the Paralogue missions I had available to me. Despite that, I can still see that there were at least 8 characters I never even got in my playthrough, according to the Support Conversation viewer you unlock after beating the game. After a quick Googling, I learned that all but one of these mystery characters were from SpotPass missions I hadn’t downloaded. Maybe that’s something I can play around with in a future playthrough. Awakening is definitely a game I can see myself re-playing at some point! 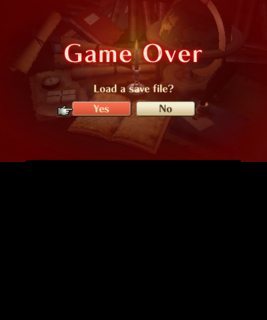 Anyway, completing one of the Paralogue missions I unlocked was especially difficult, I was a bit too reckless a number of times and experienced my first Game Over when I left Chrom alone with a few too many enemies, and they killed him dead.

On that same Paralogue map, I also had to restart when a unit got trapped, and ended up surrounded by enemies, with no chance of survival. The foes prompted dispatched my unit, forcing me to restart the level again, since I wasn’t about to continue on without Stahl. Eventually I beat the map, but I had to be careful when I did. It was a nice challenge, actually! I had to take that one seriously.

In the end, there was one character I could have paired up to unlock another Paralogue missions and child characters..but I didn’t. The character, Sully, was one I hadn’t used since they joined my party. That meant they were a level 4 Cavalier, a starter class that was completely useless to me that late in the game.

In other news, I made a mistake with Tharja. She’s a Dark Mage initially, and I had recently promoted her to an advanced class with a Master Seal. The problem is, I made her a Dark Knight. 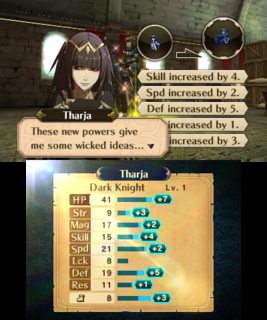 I assumed that she would still be able to use Dark magic tomes. You know, Dark Mage, Dark Knight, I assumed they’d be similar, you know? Well, I was wrong. Dark Knights use magic tomes and swords…but not Dark Magic Tomes. Ugh. Anyway, I regretted that decision. Tharja’s Strength was horrifically low, so the fact she could use swords was pretty useless. I mean I could have given her a special sword that does damage based on Magic instead of Strength, but those are pretty rare and I didn’t want to waste them. Her movement range was better as a Dark Knight, but overall I wished I’d promoted her to a Sorcerer at class change instead of Dark Knight.

With those regrets in mind, I used a Second Seal on her and made her a Dark Mage again, and eventually leveled her up to the point where I was able to class change her into a Sorcerer instead. She was my only Dark magic user, so I really wanted her to keep the ability to use Dark magic!

Although ironically, by the time she was a Sorcerer I had little of the game left, and she wasn’t what I’d consider part of my main team. So she didn’t really get all that much use as a Sorcerer. 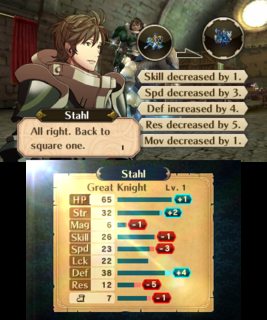 After that, I played around with Second Seals some more! Stahl maxed out as a Paladin, and I used a Second Seal to make him a Great Knight.

The cool thing about that is Paladins can use Swords and Lances, which he’d mastered both of, and now as a Great Knight he gained the ability to use axes! So he could use all 3 weapons of the weapons triangle, two of which he was Rank A in and could wield any weapon in that category, which was sweet!

My avatar, Worm, also reached max level. He was given a Second Seal as well, and became a Dark Knight. I feel like Dark Knight worked better for him than it did Tharja. He had better strength so he could actually make use of swords. It felt like a pretty natural progression for him, in my opinion.

Last, but never least, enjoy this picture of my Hero, Donnel, DESTROYER OF ALL! Fear the pot on his head! Check out his final stats, my Donnel ended up a serious beast of a unit. 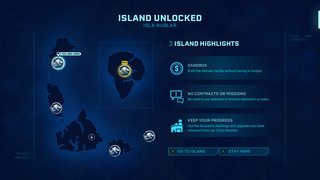 The sandbox mode on Isla Nublar is now mine to play around in! Being a sandbox mode, you’re given access to tons of settings you can’t normally toggle. You have unlimited money by default, but in addition can turn on/off things like dinosaur aggression, the need to build power plants and an electrical infrastructure, dinosaur disease, dinosaur attempting to break out, and a number of other settings as well. The mode gives you a ton of flexibility to play with all the stuff you’ve unlocked however you want. So far, it’s been awesome! I’m sure at some point sandbox mode will lose its charm, that hasn’t happened quite yet though.

I did leave sandbox mode to return to the main Campaign islands, and deal with the struggles of money, disease, dino breakouts, etc. in order to unlock more stuff, and also because those struggles make the experience more rewarding too. I mean, that’s the reason any of us plays a management game, right? Balancing some number of factors to achieve a careful balance and find prosperity. 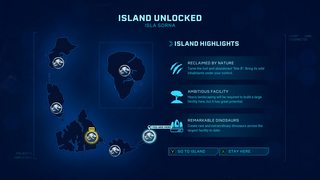 Unlocking stuff has been going well, I finally unlocked the final island, Isla Sorna, which may sound familiar to Jurassic Park fans because it’s the island from the 2nd and 3rd movies, The Lost World: Jurassic Park, and the aptly named Jurassic Park 3. You get there and there’s just wild dinosaurs running, and you have to contain them. That was really easy, I just built fences around them where they were in the wild, a couple I tranquilized and moved to enclosures with the others. One of the wild dinosaurs I enclosed was a Spinosaurus, which is a nice nod to Jurassic Park 3 where the dinosaur made its Jurassic Park film debut. …I’ve always liked the Jurassic Park movies.

There was an incident where said Spinosaurus was unhappy with its enclosure. At that point, that area of the park wasn’t prepared for emergency situations, and unfortunately (okay it was actual fun to see, I’ll admit it) a guest was eaten.

Shortly afterward, I managed to get things under control. Surprisingly my park rating and profits didn’t really take much of a hit from the death inside the park. I guess people just can’t get enough of seeing dinosaurs, even if their lives are put at risk!