I played a bunch of Valkyria Chronicles this week, and it was awesome. I’m really into it now. I’m finally grasping the finer points of combat and strategy, and the story has picked up a ton too!

I love that the writing and story humanize both sides of the conflict. The soldiers of the Empire aren’t evil, they have families and are fighting for their country just like the Gallians are. Even an enemy general, Gregor, is humanized in this way. Of course, Gregor still isn’t a great person. He’s later shown treating people in an Imperial concentration camp quite poorly.

I struggled with one mission pretty hard, getting several Game Overs. In the end, I wound up looking up a guide online, trying to get an idea of what I was doing wrong…and I realized I was hugely misunderstanding one of the unique mechanics of the level. The goal was to take down an armored APC using only rifles (no explosive weaponry allowed), before it reached the other end of the map. What I didn’t realize is that it’s path around the stage was not pre-determined, but could be influenced by moving your tank to block its path and direct it where you wanted. The part I didn’t grasp is that you can tell which direction it will move on the next turn by which way the headlights are pointing. That…was not something I noticed, but it made a huge difference once I realized this since I could see where it would move next, and better use my own tank to direct it where I wanted. That, and I used the suggestions of the guide, played a few Skirmish missions to grind some experience, and learned the “Damage Boost” Order by getting my Lancers to level 7. After that preparation, I got an A rank on the mission! 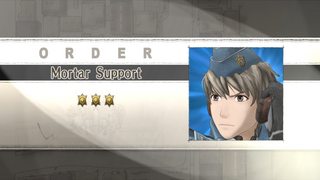 Writing the above, I don’t think I’ve mentioned Orders in any of my posts yet. Orders are special abilities you can activate each turn by spending the required amount of CP. Primarily, they’re things like “increase Attack for selected unit,” but there are some that aren’t buffs, like the ability to call down a Mortar Strike centered on the specified enemy. That one costs 3 CP, but the mortar seems to be super strong, so it’s a fair cost.

After the mission I really struggled on, I think I finally started to understand the mechanics enough that I stopped struggling so much. There was a cool mission later on that gave the Edelweiss new equipment in the form of smokescreen rounds. The Edelweiss can launch one of these to create a thick cloud of smoke over an area. While units are standing in the smoke, they’re invisible to the enemy. In that mission, you’re prompted to use this to make it past powerful gatling turrets that would otherwise mow down your infantry. It’s a cool ability! I keep forgetting to use it in other missions though. On the mission that introduced the smokescreen rounds, I did well enough to earn a B rank all on my own! No guide on online tips needed.

A few missions after that came a big one. A direct confrontation against the bulk of the Empire’s invading force, all gathered in one area. But more importantly, the enemy forces are led by Selvaria, who is a Valkyria and wields the powerful weapons of her bloodline. The game explains all of this earlier on. Basically, history tells of a powerful and technologically advanced race called the Valkyrur. A Valkyria is someone descended from the Valkyrur, but they’re all but extinct in the modern age. When the Gallians first learn that the Empire has a Valkyria on their side, it’s a big blow against their morale. In this battle too, with Selvaria leading the charge, things look grim.

While Selvaria decimates Gallian forces on another front of this battle, Squad 7 leads a charge to capture an enemy base camp. This was a fun mission. It takes place almost entirely in trenches dug into the landscape. These trenches are the only place safe from the barrage of rocket fire scorching the plains. The trenches are narrow, and you never know when an enemy is around the corner. You also start with no tanks, and no ability to use Orders since Welkin and the Edelweiss aren’t on the field. You first need to capture a camp on the other side of the map to stop the rockets, and only then do your tanks arrive. Unfortunately, they arrive at the same time as Selvaria. Her weapon can shoot a powerful beam that destroys tanks in a single shot, so your only option is to hide your tanks in pits dug into the landscape, and pelt her with tank mortar fire. This doesn’t hurt her, but it does stop her from moving for one turn. While that was going on, I advanced with my infantry and eventually took the enemy camp, successfully completing the operation. 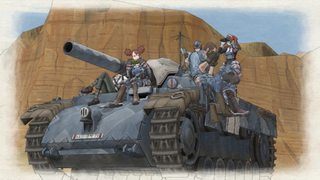 Avoiding plot spoilers, I won’t go into the events immediately following that battle. A lot happens, and some plot threads from a few missions prior come together in a great way. I really liked this writing, it made a lot of sense to me, as did the way characters reacted to it. That’s all I’ll say! Enjoy this unrelated picture of Squad 7 chilling in the desert.

Somehow, I still haven’t had any die in the line of duty on my save. I’ll seen people die during a mission only to fail that mission a turns later, and boy…these death scenes really make you feel guilty about letting a soldier die. But none of those deaths have happened in my current save, so I guess it’s a good thing I got a few Game Overs along the way, as it let me restart the mission and better plan my strategy to avoid deaths!