I had picked Mario+Rabbids up months ago, about the same time we bought our Switch, and I’m just now starting it! 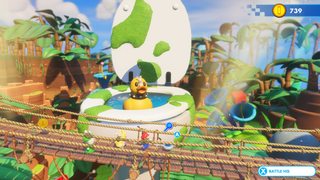 This game has a ton of character…let’s call it that. The Rabbids are zany, and although I went in skeptical of them, I do ocassionally chuckle at something the Rabbid Luigi or Rabbid Peach teammates do. The enemy Rabbids are more obnoxious I think, which is fine by me because it makes eradicating them even more fun.

Basically, the premise is that a brilliant tech wiz (from our world?) created a device, the SupaMerge, that combines two items. The SupaMerge accidentally summons Rabbids into the inventor’s room. The Rabbids do what they do best, and make a mess of things. One of them activates the SupaMerge again, and all the Rabbids get sent to the Mushroom Kingdom.

The story is light-hearted, of course. This is a Mario game after all. It sets the stage for incredibly fun tactical combat, and gets out of the way afterward. Led by the robotic AI assistant Beep-O, Mario and two friendly Rabbids, dressed as Peach and Luigi, and acting like caricatures of the two, set out to retrieve the SupaMerge from the Rabbids hands before they cause even more chaos in the Mushroom Kingdom

There are short exploration segments between combat stages where you can find optional treasure chests containing new weapons or collectibles. Sometimes there’s a simple puzzle or two to solve during these segments. Eventually, you’ll come upon a battlefield designated by Rabbid flags where one part of the current stage takes place. Most stages have two battles in them, and you get a reward at the end depending on how well you did during the battles in that stage. Keeping your team members from running out of HP is the main goal, along with completing the objective within a certain number of turns. If you do well in both of those areas, you get a good rating and a better reward.

I haven’t played an XCOM game, but I’ve heard that combat here is basically XCOM-style tactical battles. It’s turn-based, cover-focused, and you shoot your enemies. Each character can move a certain number of tiles on your turn, attack, and use their special ability if it isn’t in cooldown.

What mixes up the combat is the Dash and Team Jump abilities. A Dash is where you move into an enemy during a character’s Move, damaging them slightly. A Team Jump is when you Move onto the same tile as one of your characters, and they propel you to a distant square of your choosing. It’s basically like getting a second Move starting from one of your teammate’s positions, and it really increases your positioning options when used carefully. You can reach tiles pretty far away if you plan out Team Jumps carefully. Some characters can eventually get upgrades that allow them to Team Jump twice in a row, giving you even more flexibility! 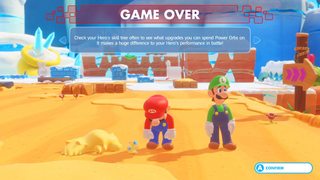 While things start off easy, once you’re far enough in to have grasped all the mechanics, the challenge increases. I’ve gotten a few Game Overs now from bosses and even regular stages. It’s always my fault though, I can never blame it anything but my own lackluster strategy, because RNG plays a pretty small role overall. RNG plays a role in the damage your regular attacks do only by a few points, and in landing critical hits, but that’s about it. There is an option at the beginning of battle to give your team extra health, sort of like turning on an Easy mode for the battle. There’s no penalty for this either. I’ve used it during boss battles or stages I was particularly struggling with. I’m trying not to use it too much though, especially during regular stages.

The one thing that legitimately bothers me so far is that there’s no option to undo a Move action if you accidentally click the wrong tile. Why isn’t this a feature? I understand not allowing an undo after an attack or something, since that could make things easier, but if the Move is the character’s first action that turn, there seems to be no reason why it shouldn’t be undo-able, in my opinion. I’ve accidentally clicked the wrong space before and after a team jump a few times, and it’s just irritating that I’m locked into moving a character to a space I didn’t intend when that happens.

Mario+Rabbids Kingdom Battle looks excellent on the Switch as well. The art style is executed really well, and looks great in both docked and handheld mode. While I was skeptical of the Rabbid premise, it somehow just works. The Rabbids are a little too goofy for me, but the presence of the Mario characters, Beep-O, and the fun and challenging gameplay just keep me drawn in. I’m looking forward to more Mario and Rabbid battling action in the coming week!

Like the Game Packs before it, this DLC is somewhere in the middle between a Stuff pack and a full Expansion. Similarly to Makin’ Magic for the original Sims, Realm of Magic lets your Sims become Spellcasters, and travel through a portal to the Magic Realm.

So last time I played was right after the last expansion pack, Island Living, came out. My main Sim, the master vampire Kayleigh Covarrubias, had just moved to the tropical Sulani area and gained a mermaid roommate. Since Realm of Magic adds a new neighborhood, Glimmerbrook, I had to have Kayleigh and the mermaid move once again! I found a pretty cozy looking home in the Gallery and placed it for them.

The house was only 1 bedroom though, so I built a little basement bunker to shove a bed for the roommate there.

PatronusLight then helped me create another new roommate for Kayleigh, since I wanted to have a spellcaster in the household and I couldn’t make Kayleigh one without having her give up her vampirism (at least not without cheats anyway, and even with cheats I’m not sure how that would work). Thus, Celeste was created! I added an attic to the house and put a small bedroom in it.

By the end of the week, Celeste had filled up her spellbook a decent amount, and was well on her way to becoming a powerful Spellcaster. Meanwhile, I had mermaid-man Bret get a job as a Firefighter. Something about a mermaid Sim that requires lots of water and hydration to stay happy running into a burning building just seemed like a good idea. Kayleigh, who’s usually the star of my Sims 4 gameplay, really didn’t do much this week. She’s still a famous actress, but I really didn’t focus on that and only had her book one gig. She’s been watching a lot of movies on TV as everyone else goes about their day. Even immortal Master Vampires need to relax sometimes, right?