I booted up Ultimate for a bit this week because of a new online tournament: Original Class of ‘64. This tournament forced you to play as one of the original 12 characters from Smash 64. The battles were mostly fought on stage from Smash 64 as well, although there was one instance where I’m pretty sure we fought on a non-Smash 64 stage during the tournament. Items were likewise limited (mostly) to those that featured in the original Super Smash Bros. as well.

The idea was really enticing, so I had to give it a try. I did badly in all but one of the tournaments I entered, where I made it past the first round only to lose in the 2nd. That was enough to place me in top 8 though.

I continue to progress in my New Game+ playthrough the with Golden Deer house.

First of all, I believe I managed to recruit all the possible characters in the first act of the game! Annette, a mage originally in the Blue Lions, was one of the last holdouts. Following her footsteps, Ingrid, a Pegasus Knight, also joined. The very last recruit was Ashe, an archer also from Blue Lions originally. With those three, I’m pretty sure I stole all the possible characters away from the other houses!

Other than that, my units leveled up many, many times over the course of the week. Nearly all of them got promoted to Advanced tier classes before the time skip. Notable progressions among these were Claude, who I turned into a Hero, Lorenz who became a Dark Bishop, and Hilda who fulfilled her ultimate destiny of becoming a Warrior. I honestly don’t know what Master tier class I’ll have Hilda become during the endgame. There’s not really another Axe-focused class, so I’ll probably have to have her diversify weapon types and turn her into a War Master.

Another notable event during my playtime was the Heron Cup dance competition. Each house enters one person into the competition. If the unit you enter wins, they get the exclusive ability to change into the Dancer class. Dancer gives the unique “Dance” action, which like in prior Fire Emblem games, is used to have units move more than once per turn. I chose Sylvain for this job, not for any tactical benefit but just because I thought it was amusing. Now I’m not sure if it’s because I stole all their members, but Black Eagles entered Hubert into the competition. Hubert is a dark, brooding character, so the idea of him dancing is pretty ridiculous.

Near the end of the week, I reached the time skip of the story line. 5 years pass in game, and all my Golden Deer have grown up so much in that time! I’m not really a fan of Leonie’s design after the time skip, it seems like a downgrade to me. But everyone else in the Golden Deer looks pretty cool, and Raphael finally has clothes that fit him instead of the shirt he wears in the first part of the game that’s too small! 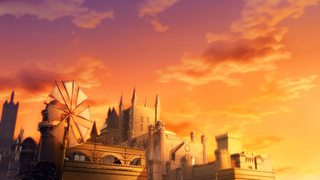 I’m excited to see how the Golden Deer storyline diverges from the last two paths I played. So far, the setup of the plot after the time skip is virtually identical to the last path I played. I’m a little let down by this initially, as the Black Eagles had a slightly modified setup, but when a game has multiple paths like this it usually means a lot of re-use of writing, plot structure, levels, etc.. Entirely separate paths would basically be like developing 3 different games at once, so it’s not really a surprise that the plot mirrors the other path here.