Since Fire Emblem: Three Houses is such a new game, I have been careful to keep spoilers out of my writing and screenshots here. Nothing here should spoil anything about Three Houses’ plot!

I finished another path through the game! This one is actually like a 4th path. During my Black Eagles playthrough, there was a moment when the game offered a choice and warned that the decision would drastically affect the rest of the game. Naturally, I made my choice and created a new save afterward. That allowed me to load my old save, and choose the other path, which is what I finished playing through this week!

Again in the interest of avoiding spoilers, I’m not going to talk about anything specific in this path, but just give some non-spoiler highlights. 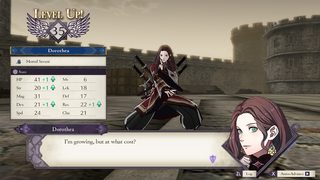 Instead of making her a Gremory, this time I made Dorothea a Mortal Savant, which is basically a unit that specializes in swords and black magic. Dorothea’s low strength meant that swords weren’t that useful on her, but maybe she’d have had higher strength if I’d had her on combat classes earlier in the game instead of magic classes? I think a unit’s class does have some impact on their stat growths. 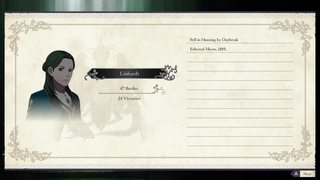 Oh, also I let Linhardt die. I’d placed him on an unsafe space, and sure enough the enemy took advantage of that. Rather than undo my actions and have to replay most of the previous turn though, I just thought “eh, oh well,” and let it happen. Dorothea, Mercedes, and Lysithea were the stronger mages, and Mercedes was far better at healing than Linhardt. Not a big loss, in my opinion. Sorry Linhardt fans!

I chose Petra for the S Support for that playthrough. She and Worm got married and lived happily ever after, etc..

Lastly for this playthrough, here’s a couple no context, spoiler-free screenshots from this path.

Of course, Three Houses is so fun that I couldn’t stop there though, and decided to start New Game+ using the clear data from my Black Eagles playthrough! New Game+ basically unlocks a special shop where you can spend the Renown you earn to unlock stuff you unlocked in your previous playthrough, but by spending the Renown you’re most likely unlocking these items much earlier than you otherwise would.

I chose the female character for this playthrough, and named her Wormette.

My house choice this time is Golden Deer. They’re an interesting group. 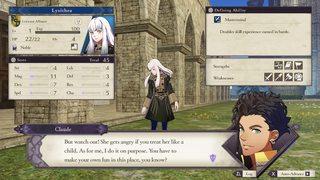 For one, Lysithea starts in Golden Deer, and I believe she has the highest magic stat growth in the game. I didn’t recruit her until late in my prior playthroughs, so I’m interested to see how powerful a magic user she will be over the course of an entire playthrough.

Hilda has been quite charming, surprisingly. In my prior playthroughs, I didn’t talk to her much because it seemed like she never wanted to talk. She’d have some lines of dialogue when I spoke to her on my Black Eagles run, but the option to Recruit her or give her gifts rarely popped up. Maybe it’s because she’s so lazy? I’m interested to see what additional aspects of her backstory and personality are shown off in her higher rank Support conversations. Similarly to Charlotte in Fire Emblem Fates, she makes herself out to be defenseless in battle and yet is quite strong, and seems naturally suited for the Warrior or other axe-wielding classes.

Lorenz is another Golden Deer who I hadn’t really interacted with at all in my prior playthroughs. On the surface he seems like your stereotypical stuck up noble, but this has lead to some pretty hilarious lines from him. He’s giving me very similar vibes to a character from Trails of Cold Steel, Jusis Albarea. That’s probably mostly due to both characters being voiced by Ben Diskin in English, but they’re also both nobles who initially come off as snooty.

There are a few other Golden Deer students as well. There’s the quiet Marianne who I don’t know very well yet but I suspect she has quite a tragic backstory. Raphael is also in this house. He’s a character I disliked on my first impression of him during my prior playthrough, but he’s grown on me a little bit I guess. He’s still my least favorite Golden Deer, but I’m hoping he makes for a good armored knight in battle. There’s also the bespectacled Ignatz, who seems destined to be the Archer/Sniper of my team, and Leonie, who I’ve made into a Pegasus Knight. The Golden Deer house is just as varied a group of characters as the Black Eagles were, and it seems both houses have plenty of fans online, so I’m looking forward to getting to know all these characters better as my playthrough progresses.

Since I’m doing a New Game+ run, I’ve been spending Renown to unlock Support Ranks with characters that I had that level of Support with in my previous playthrough. This, coupled with the fact that I also spent Renown to retain my Professor Level, means recruiting characters from other houses is a breeze. Mercedes asked to join my house, I recruited Felix the first time I asked him about it, and Ferdinand asked to join out of the blue as well. Afterward, I got Caspar, Petra, and Bernadetta as well! So nearly every Black Eagle student has joined the Golden Deer. On top of that, Sylvain, who I had no Support with at all, asked to join, and who am I to say no? So my house is growing pretty large, though to be honest I’m definitely prioritizing using the students who started out in Golden Deer in battle, to get more familiar with them and what they’re good at. The exception to that is Felix, who is such a killer swordsman that I need to use him basically all the time!

Let’s close off this post by showing off Claude, leader of the Golden Deer, as he advances to the Lord class. Claude is a pretty cool character, I passed over him initially due to his carefree facade, but he’s actually revealed to be quite a strategist. He’s always got a trick up his sleeve. And also, his Lord outfit looks pretty sweet!