I actually kept things completely spoiler-free this time around. Partially because covering everything going on in the plot for Fire Emblem: Three Houses would take a while, and I don’t want to write a novel here! Games contained within this post:

I decided to use some of my saved up bells to pay off my loan at the start of the week. Immediately afterward, I went over to Nook’s and asked him to expand my second floor. He obliged, completed the work overnight, and saddled me with another debt to repay. He calls it pocket change, and he’s not too far off, but I want to save up a bit more money before I pay this one off. My second floor is now a little bigger and I don’t really know what to do with the extra space yet.

A new villager moved in, he’s Vic, a bull villager! Honestly the only time I talked to him was when he was unpacking. Then I forgot he had moved in for the rest of the week.

Fire Emblem: Three Houses came out this week, and it was a Day One pickup for me!

Booting it up for the first time and hearing the main menu music already had me looking forward to the experience. The main menu music is the main Fire Emblem theme, but it’s given a somber feeling by having it played on a pipe organ. As with the last few entries in the series, you can choose to play without permadeath with Casual mode, or with permadeath with Classic mode. In keeping with my tradition, I’ve chosen Classic mode on Normal difficulty for my first playthrough.

You get a choice between playing as a male or female character, and you also get to name them. Byleth is the default name, and I almost went with that, until I remembered my tradition of naming my characters Worm and went with that!

Right off the bat, your mercenary life with your dad, Jeralt, is interrupted by a group of kids looking for your help fighting bandits, and the first battle begins! The battle UI looks really nice, and the combat forecast is easy to read and contains a lot of helpful information.

After the bandits have been dealt with, you learn the kids are students at Garreg Mach Monastery, one thing leads to another, and BAM you’re hired to be a professor there! That is an extreme simplification of how things play out, but I don’t want to get into story details too much. I’m finding the setting and story very enjoyable though, for what it’s worth! I just don’t think I can really do it much justice writing about it. Basically, you pick one of the Three Houses to teach, and that has a big impact on your playthrough I presume. At the very least, it controls the units you’ll have under your control for quite some time. I picked the Black Eagles because I thought Edelgard was a really cool character, which has proven to be true. Dorothea and Petra also seemed like cute characters, they’ve both proven to be valuable units on the battlefield too. 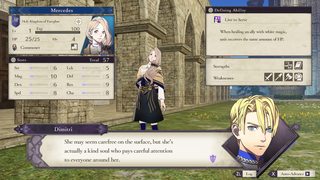 Although, PatronusLight and I both agreed that Mercedes is probably best girl. But she’s in another house, the Blue Lions, and was basically the only character in that house we liked. It should be possible to Recruit her to join the Black Eagles at some point though. We just need higher magic and bow skills in the Black Eagles, I think, which I’ve been trying to work towards.

The strategic combat is present in full force, with some tweaks and improvements. One thing I’ve come to absolutely love is the feature that shows you which units your enemies will target. This is shown with arcing red lines connecting enemies with their intended target, and it even shows you an estimate of how much damage that enemy will do. This is such a nice improvement, I’ve really enjoyed this so far! 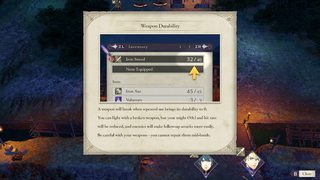 Weapon durability is back, which I am really happy to see! It’s just something I’ve come to expect from Fire Emblem. Now there’s also the ability to easily repair weapons by visiting the blacksmith and spending a few gold and resources though, no rare Hammerne staff required!

The last big difference I want to cover is Monastery exploration. During these, you roam freely around the Monastery, talking to students, accepting optional quests, and completing main story quests. I see this as an evolution of sorts of the My Castle feature from Fates. Reaching outside of the Fire Emblem series, it’s basically identical to the sections in The Legend of Heroes: Trails of Cold Steel where you explore the town and school between monthly missions. I like it a lot, and I’ve spent a lot of time interacting with students and completing all the optional quests so far. Probably more time than I’ve spent in combat, to be honest, but it’s nice the game allows for player choice and you could spend much less time exploring the Monastery than I have, if you didn’t care for that part of the game.

Honestly, there’s so much to do and so many mechanics in Three Houses, it would take me a long time to cover them all! I’ll probably devote more time to that after I finish my playthrough, and maybe even a second playthrough, and write a review on it. But for now, hopefully this was a decent taste of what Three Houses is like. It’s a fantastic experience so far, and I’m looking forward to playing a lot more of it in the coming weeks!