I finished up Persona Q2 this week, just in time before Fire Emblem: Three Houses comes out! Which is this Friday, I’m so excited!

I played the tiniest amount of Animal Crossing this week. Only one session of it, actually! That was just enough time to find out that Cobb was moving out. Cobb had been in my town from the beginning, so it’s a little surprising he’s leaving. I thought some villagers stayed in your town indefinitely…I guess maybe they do, and Cobb just wasn’t one of the lifers!

I finished my playthrough this week! Final time clocked in at just over 40 hours playing on the easiest difficulty, Safety mode.

As I made my way through the final dungeon, there were some interesting enemies, called FOEs in the game, that copied my movement. A few simple puzzles were centered around this mechanic, as you needed to use the FOE to activate a switch that was otherwise unreachable. When I reached the end of the dungeon, I was happy to see that it didn’t have any irritating gimmicks. For me, that’s one of the nicest improvements from the first Persona Q game; the dungeons are fun to explore, without the irritating and obtuse puzzles of the first game! 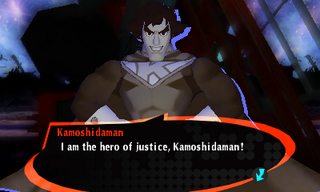 Leading up to the final boss, I had to fight mini-boss versions of each of the prior 4 dungeon bosses. I was worried about the Sci-Fi boss, since I found its gimmick annoying the first time around, but luckily this time it had no such gimmick, and the battle went by pretty quickly! I actually felt like this boss re-fight mechanic felt pretty natural, and helped make the path to the final boss more epic. 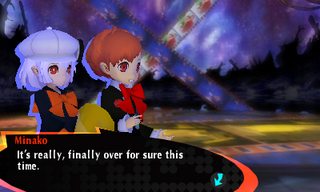 Without spoiling anything, the final boss was a lengthy endeavor, but that may have just been because my team was under-leveled and/or not properly equipped. I had to use the Safety mode revival feature 7 times! It was the sort of properly epic battle you expect from a Persona game, but I’ll say no more!

I loved the credits crawl! It featured cute artwork with the credits text scrolling over it on the top screen, and showed you the maps you’d drawn for each floor of each dungeon on the bottom screen. I thought this was really cool! I don’t remember the original Q game doing anything similar, but I could be wrong.

The end of the game was really satisfying. It made the whole experience worth it for me. You get a nice farewell from each of the characters, then a little scene plays out for each of the Persona casts in their main hangout spot. It was great, I loved it! Afterward I had this feeling of closure, but also sort of missed the characters already. I’m not entirely sure why that is, maybe seeing the casts hanging out during the end scenes left me nostalgic for their main Persona games again? Either way, it made it all worth it in the end, even if the gameplay sometimes did wear on me during the journey!

I’m hoping to get a review out for this one pretty quickly this week, but we’ll see. If I don’t write it before Fire Emblem: Three Houses comes out, I’ll likely not get to it for a while!