I lost my first unit in Revelation this week, during Chapter 12. The chapter was going pretty well until the very end. Your units are in small isolated groups in the beginning, and you just have to survive a few turns as enemies approach and attack. Eventually, you can open paths that connect the previously isolated areas, allowing you to reach the boss. I made it all the way to that point without anyone dying, and then…I had Oboro attack the boss. The boss scored a critical hit on Oboro, wiping out all her HP, and that was that. I seriously considered resetting, since I liked Oboro quite a bit in my Birthright playthrough. But, I decided not to reset since I had already used Oboro quite a bit in Birthright.

One chapter I played this week was both an exercise in careful unit movement and featured a unit mechanic. The victory condition was “Defeat the Boss,” but the path to the boss was roundabout and had plenty of enemies in it. I could have used flying units to reach the boss more quickly, but the boss had enough units nearby him that I don’t think I had enough flying units to take down all the enemies surrounding the boss and the boss himself. There was also a new mechanic where you could “Grab” certain obstructions blocking tiles on the map, removing the obstacle and getting an Obstacle item in the unit’s inventory that you could “Set” on an adjacent tile. This opened up some new avenue’s for strategy, and I actually used this while playing the chapter to block off some narrow paths, and control the number of enemies who could engage my units at a given time. All in all, it was a fun chapter, and I made it through without losing anyone!

Got Charlotte back on the team. She was an optional recruit, Elise has to talk to her to get her to join, as hinted at by Elise’s dialogue at the start of the chapter. I could have recruited Benny, but he was at the other end of the stage. Priorities and whatnot. Anyway, I haven’t used her much. She was level 10 when she joined, and would have required grinding about 4 or 5 levels to make her viable in combat, based on where the rest of my team was at. 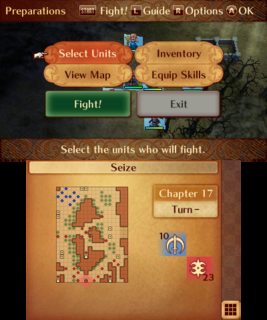 Oh boy, Chapters 16 and 17 were a real trial. On their own, neither was very difficult. Chapter 16 features fiery barriers around the stage that turn off and on every other turn. These function as walls when they’re “on,” so the layout of the map changed every time the barriers changed. Chapter 17 pits you against a lot of enemies at once. It seems a little overwhelming, but after a turn passes Xander and Leo arrive to back you up, and they can tear through enemies like nobody’s business. What made these chapters hard is that you play them back to back, and you can’t save once you reach Chapter 17! I kept making small mistakes in Chapter 17, and my units would die, or Corrin would die and I would have to restart. The meant I had to replay Chapter 16 as well, just to get back to Chapter 17! After 2 failures, the third time around I was careful enough to make it through the chapters without anyone dying.

I’ve built up more S rank Supports to unlock child characters. For whatever reason, the child characters I’ve gotten in this playthrough are really good. I don’t know if it’s because I’ve stumbled upon good pairings or if I was just lucky, but they’re good units! Take Xander’s son, Siegbert. He joined as a Cavalier, but had an Offspring Seal so he was ready for immediate promotion. I made him a Great Knight, and his stats rival Xander’s in most cases! His mother is Hinoka, because I wanted to use a pairing unique to Revelation and pair up a Nohrian and Hoshidan character.

Speaking of child units, I inadvertently did something…bad. So Rhajat is a mage, and Hayato’s child. I decided that I wanted to pair up the avatar, Corrin, and Rhajat. So I boosted their support, and got them to S rank. It was only then that I realized what I’d done. Rhajat’s parents are Hayato, of course, and Sakura. Sakura is Corrin’s sister. Rhajat is Corrin’s neice. That’s not okay, Fire Emblem! Anyway, that means Corrin’s daughter, Kana, is inbred in my playthrough. On the plus side, Kana has good stats this time around!

I made the voyage out to the Seafoam Islands. On the way, I battled like a dozen swimmers. My Victreebel annihilated their water-type teams.

Upon reaching the Seafoam Islands, I remembered the block pushing puzzle it features. With that in mind, I started pushing all the rocks I found down holes, and sometimes jumped down the hole myself because I’m pretty sure you need to do that in at least one occassion in this dungeon. Along the way, I caught a bunch of new kinds of Pokémon, like Shellder, Slowpoke, Jynx, and Dewgong. Making it through this dungeon wasn’t too bad, but I know there’s an optional path inside that leads to Articuno. However, I couldn’t find all the rocks I needed to reveal the path to Articuno, so I haven’t challenged and caught it yet.

Cinnabar Island waited just beyond the Seafoam Islands. The local Gym is in plain sight upon arrival, but it’s locked, and those who want to challenge it must explore the ruined Pokémon Mansion nearby to find the key. Inside the Mansion, I caught some Magmar Weezing, and Ditto.

Based on some books you can find and read inside, it becomes clear that experiments to create some sort of “ultimate Pokémon” occurred here in the past. Of course, this ultimate Pokémon was Mewtwo. Near where you find the Secret Key that will open the Gym’s doors, there’s a large tube which is presumably where Mewtwo was held for a while. There’s a lot of backstory hidden here, which makes Pokémon Mansion pretty interesting. 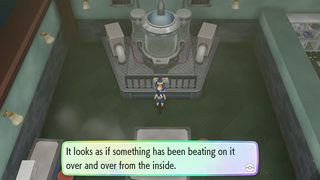 Before you can challenge Blaine, he has you participate in a quiz show. If you answer any of his 5 questions wrong, you must face one of his gym trainers. I got all 5 questions right though, so for me, I only had to face Blaine in this gym! His team was pretty easy for me to take down. Between Onix’s ground-type Earthquake and Eevee’s water-type Bouncy Bubble, it was a piece of cake. After defeating him, the Volcano Badge was mine! I liked Cinnbar Island Gym, Blaine and the quiz he offered were pretty cool! I’m pretty sure in the original games there was no quiz, and you just fought a few trainers before reaching Blaine. Maybe that’s something they got from the anime? It worked well, in any case.

With 7 badges to my name, there’s only one gym left to challenge, the one back in Viridian City! My team is ready to take it on, then all that’s left is Victory Road and the Elite Four of the Pokémon League.