I finished my playthrough of Fire Emblem Fates: Conquest! 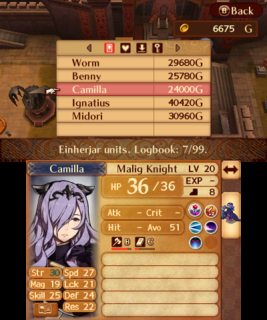 When I first made it to Chapter 27, the final chapter, I knew I was in for a rough time. Sadly, I had lost Camilla in the prior chapter, so I created a new save in case I needed to go back and keep her alive. So the first time I played Chapter 27, I didn’t have a full party of units. I was 2 strong units shy of a full party. I also lost so many units beating the chapter. But I thought, “well, it’s the last chapter so its okay.” Then, I beat Chapter 27…only to be surprised by the Endgame chapter immediately afterward, with no option to save in between! I should have known 27 wasn’t the last chapter, because Fire Emblem always calls the final chapter Endgame.

Knowing that the Endgame chapter was waiting for me, I replayed Chapter 27 more carefully, and managed to beat it while only losing a few more units. Endgame still rocked my house hard though, I needed more manpower and better preparation! So, I loaded my Chapter 26 save. Camilla would live to see Endgame, I swore it to myself! After a few retries of Chapter 26, I got everyone through alive. Somehow I was able to do the same in Chapter 27. Then I got to Endgame again. 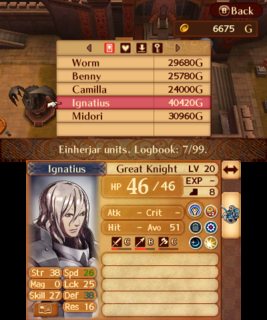 I was still 2 characters shy of a full roster for Endgame, which probably made things ever so slightly more difficult. But I took things step by step, and didn’t rush forward too much. In the end it wasn’t that difficult, although taking out the final boss brought down many of my units. Xander fell (he actually was defeated by regular enemies, not the final boss), as well as Leo. That made the avatar and Camilla the only members of the Nohr royal family to make it through the game uninjured. Well, my Azura also made it through as well, if she counts. I sacrificed Shura in order to break through the enemy’s guard. Sofia died. Ignatius turned out to be an extremely good Great Knight in the final chapters, his strength and defense were super high!

Fire Emblem Fates: Conquest on Classic mode was a challenge. It pushed me to think about strategy more often than any other Fire Emblem game. For this, it was a lot of fun! The ending of the story in Conquest leaves some things unexplained, with Birthright to fill in some holes and Revelations to complete the picture. It feels a little strange due to this, but overall it’s relatively satisfying anyway.

Since I finished Conquest, I decided to move onto Birthright. Again, I’ll be playing it in Classic Mode on Normal, mostly because I used the “Branch of Fate” option on the main menu to avoid having to play the 6 introductory missions again. I didn’t realize I couldn’t change to Casual Mode when doing this, but I don’t anticipate having any issues keeping characters alive in Birthright. 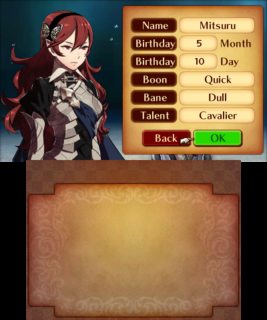 I made a new avatar and decided to make them female this time around, and ended up basically making Mitsuru Kirijo from Persona 3. After PatronusLight pointed out they resembled Mitsuru, I of course had to name them that as well. The hair color even makes sense for her since most of her Hoshidan siblings have reddish hair!

Right off the bat, Birthright seems way easier than Conquest. The enemies in the first Birthright mission seemed to be a lower level. You’re also given many opportunities to grind for extra experience and gold, in the form of “Challenge” missions that seem to be available between each story mission. They haven’t been much of a challenge so far, but I’m enjoying having the time build up the Support Links between my units. Chances are I’ll get more pairs of units to S rank in Birthright, and have access to way more Paralogue missions than I did when playing Conquest.

One of the modes I hadn’t tried before this week was Mob Smash. I tried out the Century Smash option, where the goal is defeat 100 fighters as fast as you can! The majority of them are Mii fighters, but occasionally there’s an actual fighter thrown into the mix. All of them get sent flying very easily, but you still only have one life so every percent of damage you take makes your pulse race. It was a pretty fun mode, I played it as Chrom and completed it in under 4 minutes!

My goal of completing Classic Mode as each of the characters from the original N64 Smash has been reached! Surprisingly, I think Jigglypuff’s Classic Mode path was my favorite so far. Every fighter you face is from the N64 roster, and every stage is an N64 stage!

After seeing PatronusLight play Let’s Go Eevee a bit, I couldn’t hold back anymore and had to start my playthrough!

Pokémon Let’s Go Eevee (along with Pokémon Let’s Go Pikachu) is a remake of Gen 1’s Pokémon Yellow, but with many updates! Seeing Kanto in 3D in this art style is amazing. For as much as I played Gen 1 back in the day, I’d forgotten how cool this map layout is. It’s not just a straight loop or anything, there’s interconnected cities and underground tunnels. I love Kanto!

The most notably change in these remakes is the way you encounter and catch wild Pokémon. It’s way different than in the mainline Pokémon games. You see wild Pokémon appear on the field rather than encountering them randomly when walking through tall grass or caves. This is really cool honestly, especially when you see an uncommon Pokémon pop up!

When you come into contact with a wild Pokémon, instead of going into battle like every other Pokémon game, you go into “catching mode,” I guess? You basically throw Poké Balls until the Pokémon is captured, having to physically make a throwing motion if playing with a Joy-Con. This throwing motion is something I’m really bad at, for whatever reason. I’m constantly missing or just dropping Poké Balls! Luckily you get tons of Poké Balls for free. Trainers will give you extras when you beat them in battle, and you start the game with 50 Poké Balls! PatronusLight and I had a real laugh over how bad I am, because she’s had no issues so far with these mechanics in her playthrough!

When I tried catching Pokémon in tablet mode with the Joy-Cons docked, I found it to be much easier since you just press a button to throw the Poké Ball. Even though I’m bad the throwing motion, the catching mechanic is still sort of fun. It can be frustrating when a Pokémon is moving around a lot. Since these are spinoff games, and not meant to be mainline entries in the series, I’m fine with the different catching mechanics. If you told me Pokémon was always going to be like this moving forward, well then we’d probably have a very different conversation. But as it stands, I think the lack of wild Pokémon battles is okay for a spin-off like this. It also helps distance these games from the Fire Red and Leaf Green remakes.

I defeated Brock pretty easily with my trusty Bellsprout. Once you beat him and get the Boulder Badge, your character and Eevee exchange the cutest high five, where Eevee high-fives you with its tail. It was adorable! They do this after each Badge is awarded and it’s amazing every time.

Onix is PatronusLight’s favorite Pokémon, so I spent some time in Mt. Moon hunting for one. One showed up surprisingly quickly and I threw several Great Balls at, but it broke all of them. Sadly, it ran away before I could catch it. I tried a little more, but I couldn’t find a second one there. I found something even cooler though: a shiny Geodude! I was nervous that it would run away as well, but luckily I caught it in 2 Poké Balls! 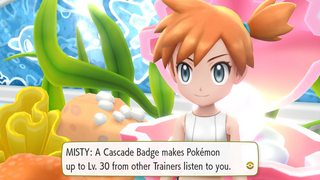 Bellsprout handled the trainers at the Cerulean City Gym easily. Misty’s team put up a bit more of a fight, but was still a breeze for my team. Lieutenant Surge gave me a little more trouble. His Raichu knew Double Kick so he was able to land super effective hits on my Geodude, so it was quite the straightforward fight I expected.

I kept the shiny Geodude long enough for it to evolve into a shiny Graveller…which looks far less cool. Shortly afterward, I went through Rock Tunnel. Onix is much more common there, and I was finally able to capture one! Aside from being PatronusLight’s favorite Pokémon, she also wanted me to have it in my party since you can ride on its back/head! This truly is an amazing sight, and it never gets old.

I’m currently near the end of Team Rocket’s hideout in Celadon City, so that puts me at three badges in! Returning to Kanto and replaying the gyms and story of the first Pokémon generation has been really fun overall, and I’m looking forward to playing it some more!